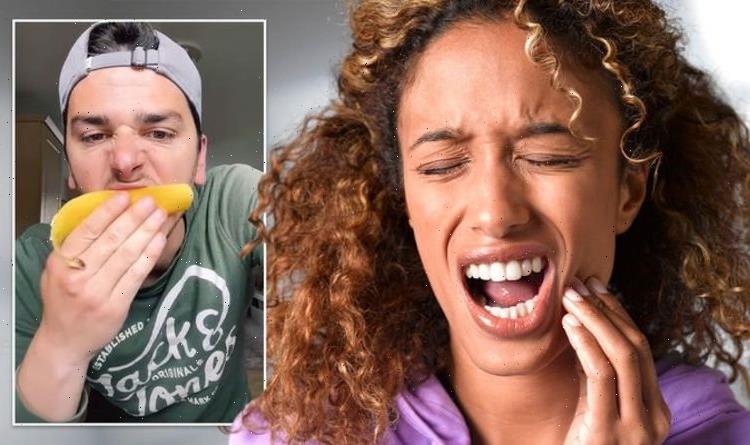 Dentist reveals how much toothpaste you should use

Teeth whitening can be a costly exercise, which is perhaps why so many users of video sharing platform TikTok have begun to share low-cost at-home methods. However, while obtaining budget-friendly pearly whites may sound like a dream come true, certain trends can have a devastating impact on your oral health.

According to dentists, many of these trends can do more harm than good over time, with frequent use of seemingly harmless products causing “irreversible damage”.

Here are three viral TikTok teeth whitening trends that could damage your oral health for good.

This bizarre viral hack sees users rubbing the inside of an opened banana skin directly onto their teeth.

According to users, it can provide quick and easy brightness.

TikTok user @Gentimalvataj shared a video of the so-called trick describing it as a “life hack”, amassing more than 10,000 likes.

He said: “The theory for banana peels whitening teeth is that they have high potassium and magnesium content that rubs off and binds to teeth, but there is no evidence for this being effective. “

Bananas aren’t the only fruit that people have been using to try and brighten their teeth up, according to the dentist.

Strawberries have also done the rounds on TikTok as a so-called whitening agent.

Dr Springs said: “The theory that strawberries whiten teeth is that due to their acidity, the acid will clean away stains, which is true, but acid does so by eating away the enamel that protects your teeth, so it’s the worst possible way to do it.”

Bicarbonate of soda, also known as baking soda, is hailed for being a go-to product for all manner of hacks around the home.

Along with cleaning carpets and removing odours, the leavening agent is also being used for at-home beauty treatments.

TikTok user @Eatwithlew shared a video where he mixes bicarbonate of soda with toothpaste, which he says “works just as well” as store-bought whitening strips.

The video created added that he noticed a “massive difference in the first week”.

Dentist Dr Spings points out that although baking soda may well work to lift the colour of your teeth, it is not necessarily the smartest decision over time.

He said: “For the most part, baking soda mixed in a paste with water is safe to whiten teeth, but you have to be extremely gentle with it and it shouldn’t be used often.

“The way it works to remove stains is by grinding off surface stains, but this removes tooth enamel, which causes a host of problems if used too frequently or applied too forcefully.

“Never apply plain baking soda directly to the teeth, even using a paste of baking soda mixed 1:1 with water to avoid it being too abrasive causes irreversible damage.”

Though it may be hard to believe, some TikTok users have actually begun to use hydrogen peroxide on their teeth.

Hydrogen peroxide is a colourless liquid chemical that is often used as a disinfectant and as bleach.

The chemical also has lightening properties which is why it is included in many blonde hair dyes.

However, an 18-year-old TikTok user named Claudia went a step further, by rubbing a peroxide soaked cotton bud onto her teeth to make them whiter.

The user received more than 12.4 million views as a result and has since been copied by other creators on the platform.

Despite its popularity, Dr Adrienne Hedrick of Longmont Dental Loft urged people against this.

She said: “When it comes to hydrogen peroxide there are different strengths and higher concentrations can be bad for your gums.

“If you use a low concentration of hydrogen peroxide as a mouthwash or within toothpaste it will be perfectly safe.

“However it would be such a low concentration it most likely wouldn’t have much impact on whitening teeth. Hydrogen peroxide is a liquid so it’s not abrasive at all.”