Transgender woman left with hole in her hip from silicone injections

Transgender woman, 33, reveals how silicone injections she had to create a curvier figure while transitioning left her ‘disfigured’ with a hole in her hip

A woman has revealed she’s been left with a hole in her body after having botched fat injections in a bid to make herself curvier.

Shauna Brooks, 33, a transgender activist, actress and model from Atlanta, says her body has been ruined by silicone injections – which were made up of a cancerous substance – and had to have them removed from her body immediately, leaving her with a hole in her hip.

Shauna had been having these injections since she was 16, in a bid for a more feminine body while she was transitioning.

No adverse side effects were noticed until a decade later when she started experiencing excruciating pain, discolouration of her skin and dimpling. 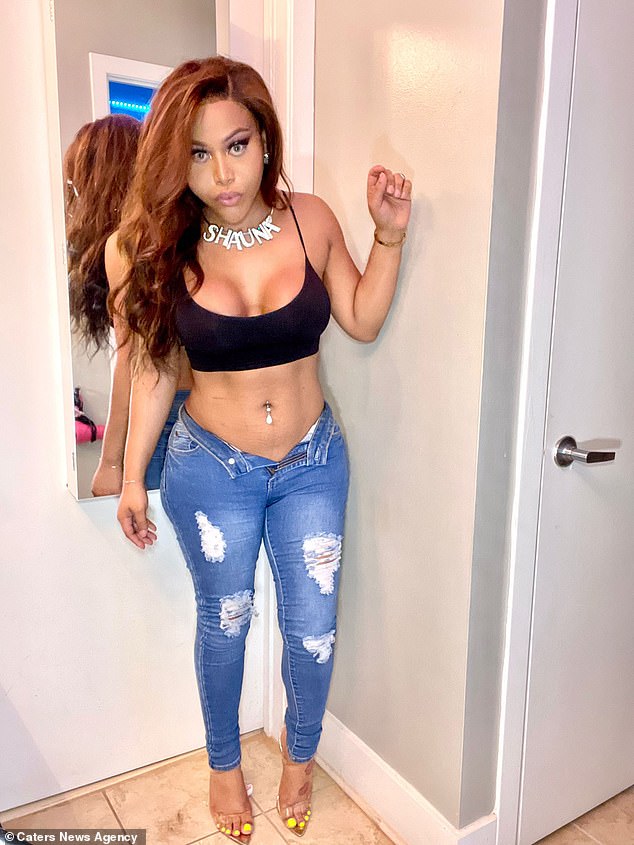 Transgender activist, actress and model Shauna Brooks, 33, (pictured) has revealed how botched fat injections left her in agonising pain, and ultimately having to have the injected substance removed 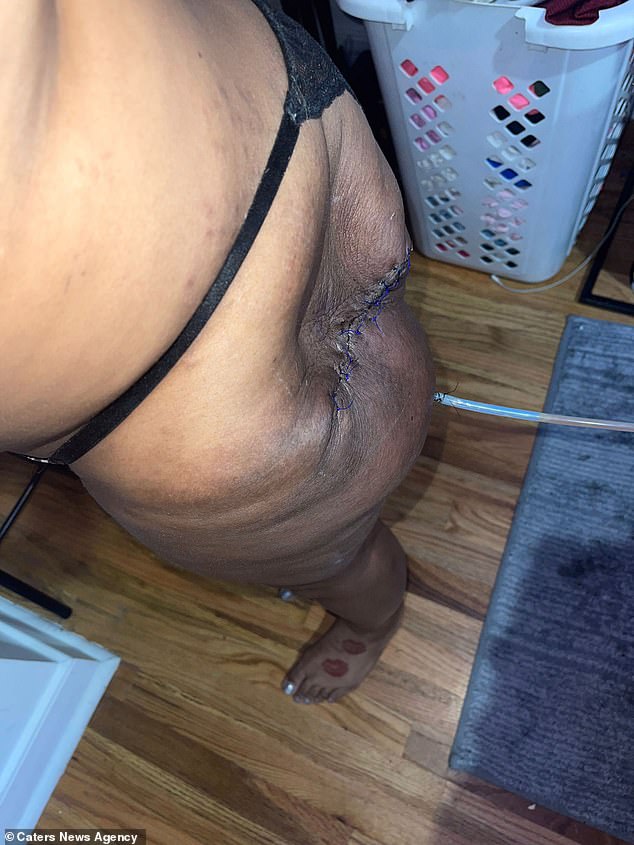 Shauna said: ‘I was young and naive when I had it done.

‘I have so many regrets because I now have a hole in my hip.

‘If I didn’t get it removed, I would have ended up in a wheelchair, or even worse, I could have died.

‘Growing up being regularly attacked for my gender expression. It led me to want to feminize my look.

‘There was a trans woman known within the LGBTQ community for giving trans women aesthetic enhancements. 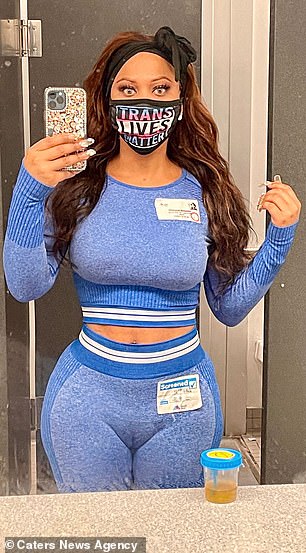 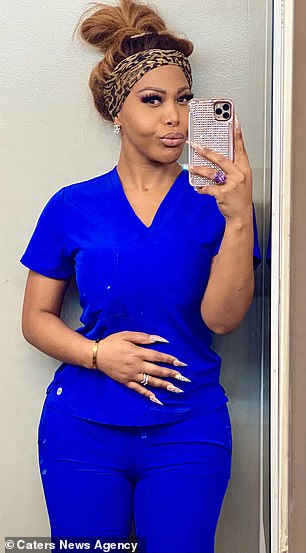 The actress revealed that if I didn’t get the silicone removed, she ‘would have ended up in a wheelchair’ – or could even have died 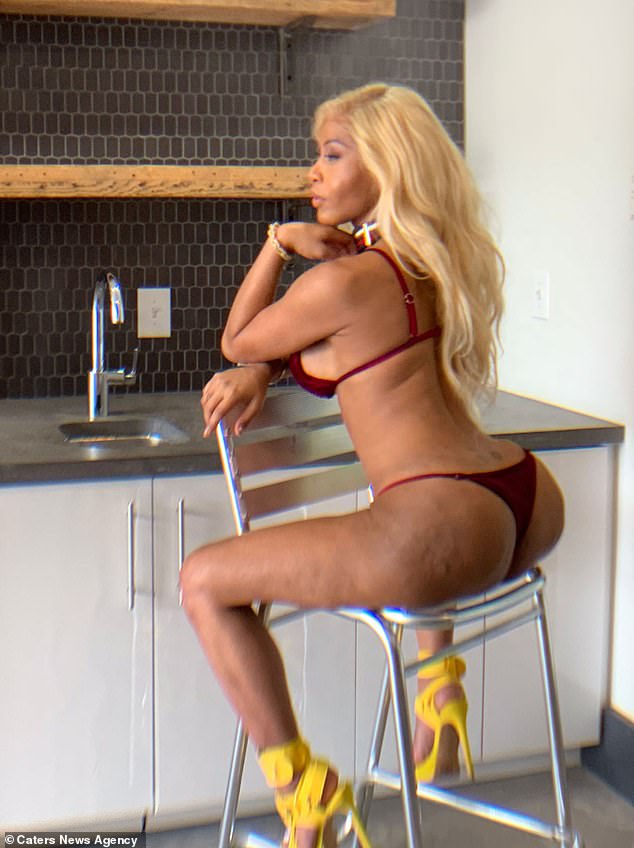 Shauna (pictured before having surgery to remove the injected substance) started getting the jabs when she was 16, then started experiencing pain and dimpling 10 years later

‘At the time, I was just 16, so I was young and naïve, but others had trusted her to get modifications done, so it seemed like a good idea at the time.

‘I thought getting the enhancements would make people see me more as a woman if had a more enhanced female silhouette.

‘I just recently found out it was not medically graded silicone, and it was actually a cancerous substance.’

Shauna revealed she first began noticing adverse side effects a decade later when the bottom half of her body started to cause her a series of problems.

She couldn’t get out of bed, walk, stand or sit still for too long. Aeroplane rides were excruciating, and she started to feel pins and needles in her hips. The skin on her hip started to change colour. 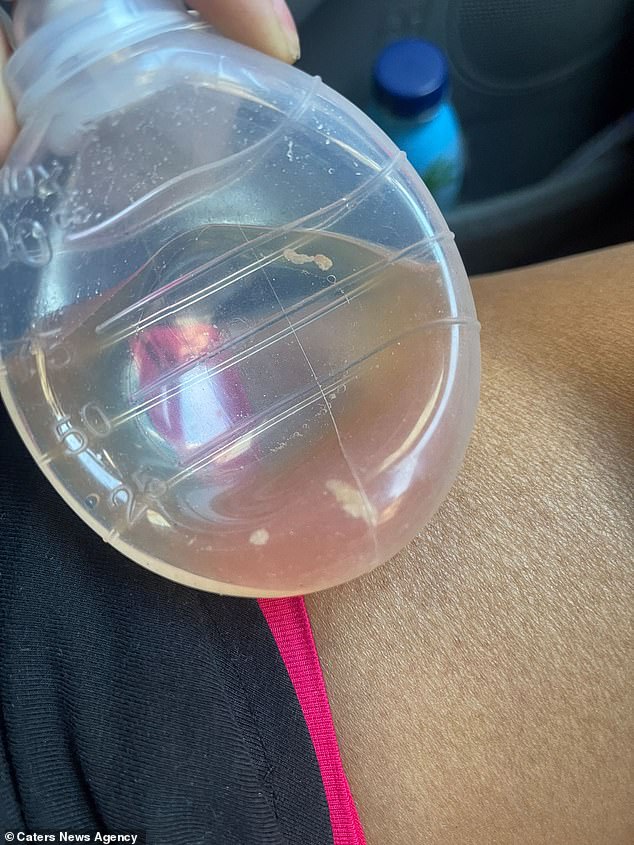 As a result of the botched procedure, Shauna had to have the silicone removed, and drains (pictured) inserted into the area to remove fluid 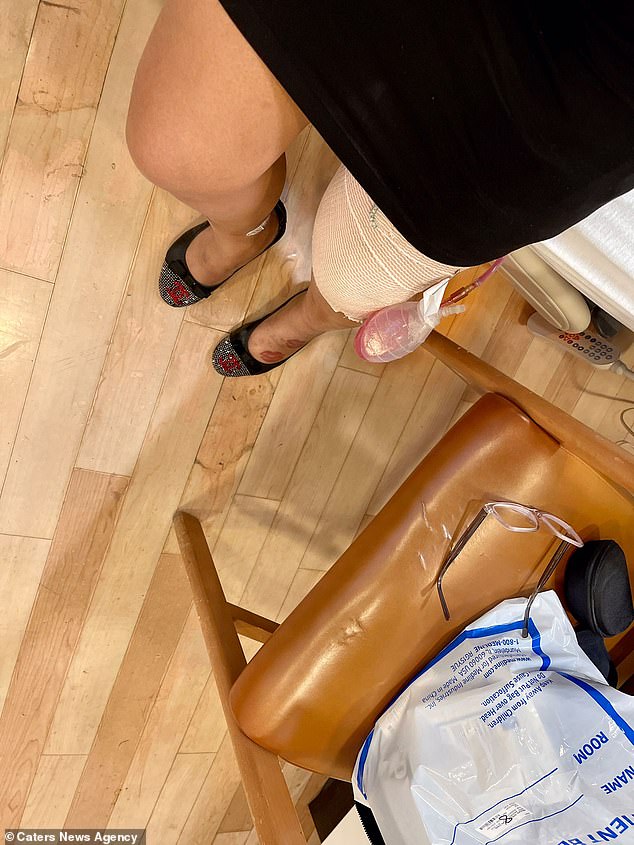 Surgery: According to Shauna (pictured with bandages and a drain following the removal of the silicone), she has been left with ‘horrendous scars’

Shauna added: ‘I have been battling the pain and side effects for the last two to three years.

‘At first, I thought the pain was because I was no longer on hormones. I never imagined it could have been to do with my injections.

‘The past two years, the pain has been intolerable. I only discovered it was to do with the botched injections after I went to see a doctor about complications with my breast implants, and he pointed out my hips.

‘I was sent for an MRI two months ago, and when the results came back, the doctor told me it was cancerous, and he had to get it out of me as soon as possible.

Shauna has been left with sunken skin, has had drains inserted to remove fluid, and has horrendous scars which she says now affect her career as an actress and model.

She continued: ‘The removal of the silicone has been painfully exhausting and emotionally draining.

‘Luckily, her surgeon has managed to remove 95 per cent of it at the moment, but now I’ve been left with a hole in my hip.

‘It’s dishearteningly disgusting to endure, and it has affected me not only physically but psychologically as well. 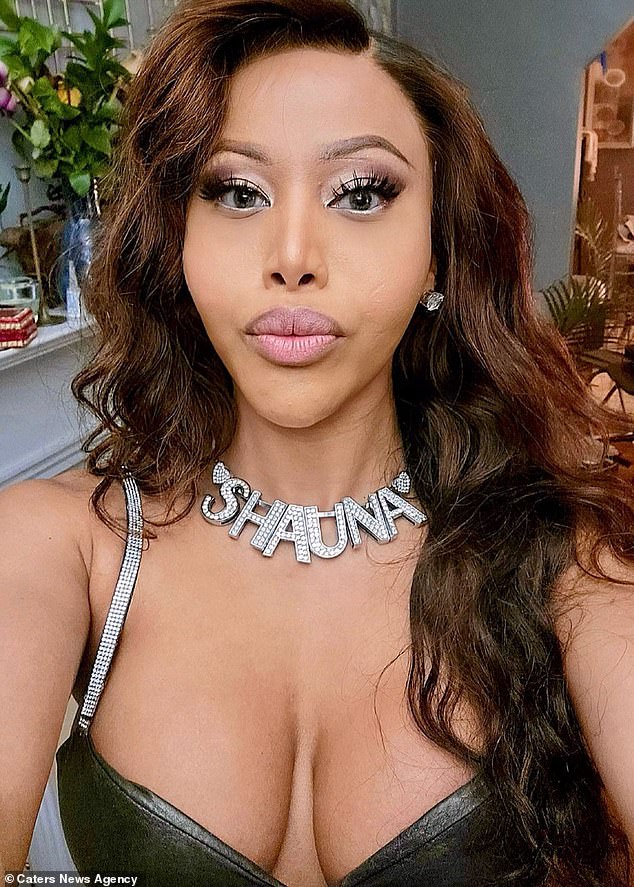 Now the activist and actress wants to ensure ‘no one else goes through this by getting injectables in their body’, and is sharing her story

‘I want to make sure no one else goes through this by getting injectables in their body.

‘There’s no reason why anything should be injected into the human body that isn’t medically approved.

‘If my doctor hadn’t noticed this while performing my capsulized and ruptured breast implant removal and I hadn’t had it removed, I very well could’ve ended up losing my mobility left in a wheelchair.

‘It’s been a devastating journey that has ruined my life.

‘If all goes well with my recovery process, I’m hoping to do fat transfers to try to reconstruct my hips in the future to help me get my body back.’