Victorian Premier Daniel Andrews has revealed a number of people have made “appalling” and “potentially criminal” threats against his wife Catherine and children amid increasingly toxic debate on the government’s draft pandemic legislation, which is expected to be passed later this week.

It comes as the Parliament House security team has warned politicians attending the building to take extra care amid angry and ugly protests on its front steps. 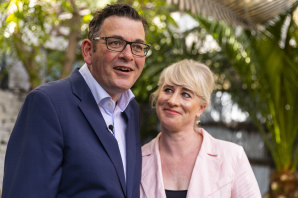 The three crossbenchers whose support will be crucial to passing the bill – the Greens’ Samantha Ratnam, Reason’s Fiona Patton and Animal Justice Party’s Andy Meddick – have also revealed they have suffered campaigns of threats, including death threats, in the lead up to the vote.

Protests that started at the weekend have rolled into this week, with demonstrators carrying signs likening Mr Andrews to Adolf Hitler, and chanting death threats against him and others. They even paraded with mock gallows, including one bearing three nooses.

Greens MP Ellen Sandell revealed on Monday evening that after receiving the warning from the Parliament security team, she for the first time in public office “genuinely felt a little worried about [her] own safety.

“I support the right to protest, but movements like neo-Nazis and the far-right have no place in our country,” she said.

“To those politicians standing on the steps with these crowds, I say ‘take a good hard look at what you’ve encouraged’. Jo Cox and the Capitol Riots show that inciting this kind of behaviour is not benign. It can have real, devastating consequences.”

British Labour politician Jo Cox was murdered in 2016 in a politically motivated attack by far-right terrorist Thomas Mair. Last month Britain was rocked by another political assassination, when Conservative MP Sir David Amess was stabbed to death inside a church in another terrorist attack.

Mr Andrews said he would not be deterred by the threats from working “to keep every family safe”.

“There are some out there who are making threats against me and Catherine the kids,” he said.

“I wouldn’t want the appalling, the disgusting, and the potentially criminal behaviour of a small number of people to attract detract from the amazing job that so many Victorians have done.

“It is so unfair for a small, ugly mob to be taking attention away from the more than 90 per cent of Victorians who have had a first dose and will soon have had a second dose. That’s where our focus should be today.”

Opposition leader Matthew Guy on Wednesday morning condemned the behaviour of some protestors, but defended members of his team, including Bernie Finn, Craig Ondarchie and David Davis, who have attended the protests.

“People who have different points of view in this debate should put those points of view respectfully and sensibly, there is no place for extremism of any kind,” Mr Guy said. 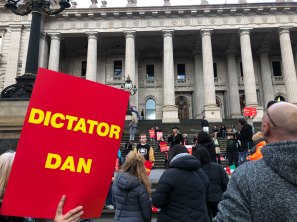 Protesters on the steps of Victorian Parliament on MondayCredit:David Estcourt

“Some of the images we’ve seen on the steps of Parliament for the second day, I absolutely condemn them; I don’t support them in any way. I can’t be any clearer in my language on it. And I ask all members of Parliament, on all sides, [to] conduct their presentations and their speeches sensibly.”

Asked by a reporter whether he was frustrated to see members of his team addressing rallies where protestors were carrying gallows or offensive signs, or chanting death threats, Mr Guy rejoined: “no, because not every single person out there is … saying silly things”.

“There some people there who, if they cause trouble, they should be condemned.

Under increasing pressure from legal groups, the Victorian Ombudsman and others, the Andrews government on Monday night agreed to amend its controversial legislation to halve fines for breaching public health orders, and slashing the timeframe to release the reasons behind pandemic decisions.

Ombudsman Deborah Glass raised serious concerns with the state government and called for an independent body to hear complaints about detention and enforcement of pandemic orders, in a submission released to The Age.

Ms Glass recommended another independent body, preferably a court, be empowered to review pandemic orders and make binding decisions, which Labor’s proposed amendments did not address.

Mr Andrews said the “awful” debate of recent weeks “does not speak to the values of us and the conduct of the vast, vast majority of Victorians”.

“On their behalf, I’m offended, not at the threats, but at the fact that this ugly behaviour might be taking the focus away from what we should be focused on; how much we’ve achieved by sticking together, not by being divided, [and] not by this ugliness.”