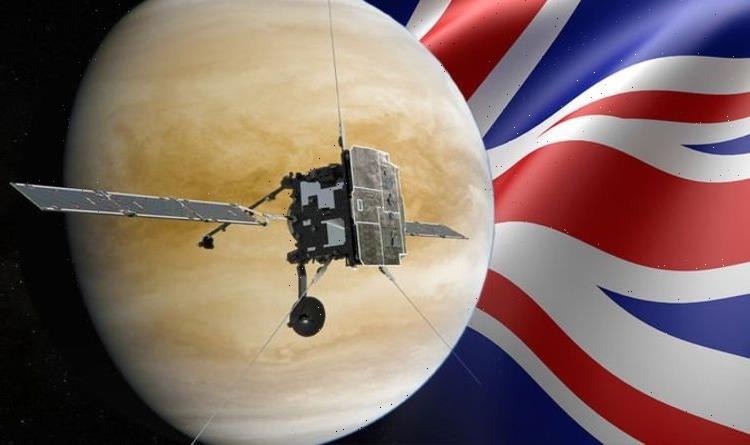 The UK-built Solar Orbiter is racing deep into the solar system for a historic double flyby of Venus. On Monday, the solar physics spacecraft will swing around the planet on a trajectory that will bring it back to Earth in November. Just 33 hours later, the European and Japanese BepiColombo probe will perform a similar manoeuvre on its way to Mercury.

The gravity-assisted flyby is just one of many that Solar Orbiter will perform on its journey to the Sun.

The spacecraft, which was built by Airbus in Stevenage, carries 10 cutting-edge instruments that will study in great detail the Sun’s plasma and magnetic fields while also taking up-close images of the Sun’s polar regions.

Solar Orbiter is a partnership between the European Space Agency (ESA) and NASA but the UK has taken a leading role in building the spacecraft and many of its subsystems.

One of these instruments is SPICE – a high-resolution spectrometer built by an international team led by RAL Space at the Rutherford Appleton Laboratory in Oxfordshire.

The scientist in charge of the endeavour, Dr Andrzej Fludra, previously told Express.co.uk Solar Orbiter represents a “world-class mission” that will define the field of solar physics in the coming decade.

And now Ms Solloway has stated the UK’s contributions to the mission represent the best of what Britain has to offer.

She told Express.co.uk: “As Solar Orbiter and BepiColombo travel further through our solar system we are reminded of the outstanding synergy between the UK’s world-leading researchers and our innovative space industry.

“These UK-backed missions bring us one step closer to understanding how our celestial neighbours formed, allowing us to discover more about our planet whilst supporting our economy, creating jobs and cementing the UK’s status as a global science superpower.”

Solar Orbiter will 'take measurements of the Sun' says expert

This will be the probe’s second flyby of the planet after first approaching in December 2020.

According to Dr Fludra, this will be followed by a rather “unusual” flyby of Earth later this year.

He explained: “You could say, ‘Why have you travelled for 22 months to return to Earth?’

“And it will be very close actually. The one near Venus is about 8,000km, whereas the one by Earth will be 435km.

“So that’s incredibly close – almost grazing the Earth, but of course these flybys are absolutely necessary to lose the spacecraft’s velocity and to nudge it or direct it more towards the Sun.”

Solar Orbiter launched on February 10, 2020, after nearly a decade of preparation and hard work.

The probe was launched by NASA aboard an Atlas V 411 rocket at Cape Canaveral, Florida.

From the day of launch, it will take the spacecraft about 3.5 years to reach its operational orbit, using the Earth’s and Venus’s gravity to adjust its trajectory.

By performing multiple flybys of Venus, the spacecraft will also raise its orbital inclination by up to 24 degrees to get a glimpse of the Sun’s polar regions.

Unfortunately, the space probe won’t be beaming back any breathtaking pictures of Venus’s surface.

Solar Orbiter’s cameras will remain focused on the Sun during this time.

There is, however, a chance for the probe to observe Venus’s nightside in the days leading to the flyby.

Dr Fludra said: “This is primarily interesting for the in-situ instruments that can fly through the environment of Venus.

“So they can measure things like magnetic fields, plasma waves or energetic ions.”

Solar Orbiter is armed with a total of 10 instruments: six telescopes that will watch the Sun and four in-situ devices that will monitor the space environment around the spacecraft itself.

At its closest, Solar Orbiter will approach the Sun from a distance of about 0.28 au or 42 million km.

The first perihelion or close flyby of the Sun occurred on June 15, 2020.

After next week’s flyby of Venus and of Earth in November, the probe will perform another five passes of Venus.

During the nominal phase of its mission, Solar Orbiter will perform 14 perihelions but there are plans to extend the mission for another three years.