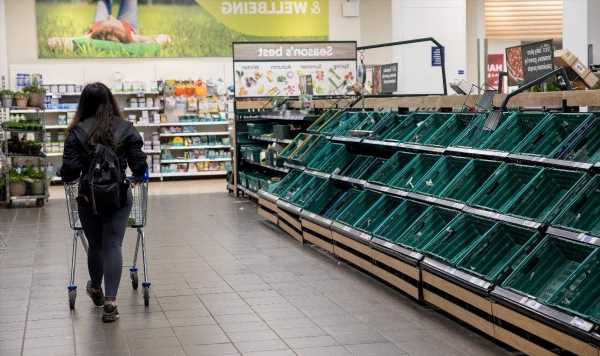 The war in Ukraine has caused chaos to the supply chain, sparking alarm for farmers up and down the country. Slashed Russian supplies and a Chinese export ban on nitrogen fertiliser, used on wheat, vegetables and pulses, has sent prices skyrocketing from £300 per tonne to £1,000. But to cope with those prices, British farmers are reportedly considering slashing production.

He added: “I could take you to 10 farms in the surrounding area now that are turning down their production – chicken farmers, egg producers, milk producers, even beef and lamb because feed prices are going through the roof.

“We’ve got absolutely ridiculous fertiliser prices and we can’t forget that half the food produced in this world comes from artificial fertiliser.”

And this is not the only area where shortages may start to appear.

Supermarkets are also already said to be limiting how much sunflower oil, much of which comes from Ukraine.

Now, there are fears other products could be limited too.

Tim Lang, professor emeritus of food policy at City, University of London, said: “We are talking about rationing sunflower oil today, but it could be other products soon.

“The Ukraine crisis is piling on the agony and reminding us – and the Government – that we cannot assume supermarket shelves will always be full.”

And some supermarkets might be feeling the effects more than others.
Morrisons issued an apology to its customers after there was a shortage of meat and lettuce on store shelves.

The chain cited disruptions n to the supply chain led as the cause of the “low availability” of stock levels this Saturday.

The notice read: “Due to disruptions within our supply chain, we are seeing low availability of lettuce.

“Apologies for any inconvenience caused and thank you for your understanding.”

And Morrisons was not the only major supermarket facing issues, with Co-op also noting difficulties in sourcing lettuce, vegetable oil and rapeseed oil.

Shortages of other items may pop up too.

The chief executive of the British Free Range Egg Producers Association chief executive, Robert Gooch, has warned that shortages of the product in Britain are set to emerge later this year.

He warned that retailers will refuse to budge on egg prices despite layer flocks making losses, as well as producers quitting the sector.

But the food crisis is not just restricted to the UK.

President of the World Bank, David Malpass, has warned that the spike in the prices of staple foods could become a worldwide issue.

He said in a speech at an event organised by the US Treasury: “The tragedy unfolding in Ukraine must not be compounded with another tragedy — a global food crisis.”