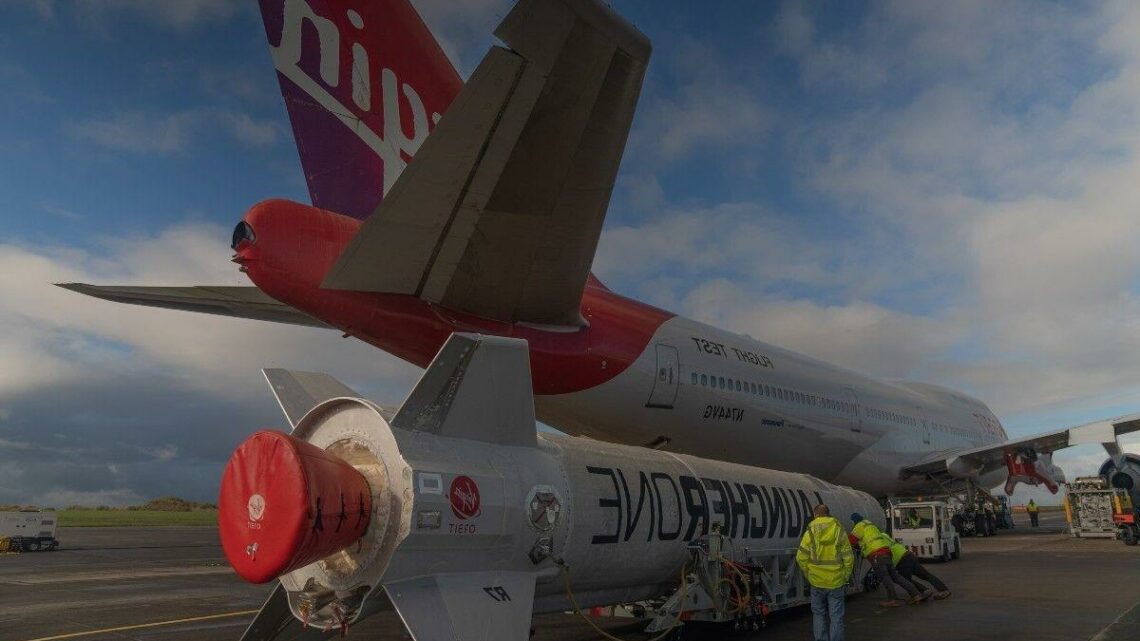 NASA launches Artemis I rocket bound for the moon

The UK’s first-ever space launch has edged even closer after Spaceport Cornwall, the site where the rocket will blast off from in a historic moment for Britain’s space industry, got approval for Virgin Orbit’s launch. In the coming weeks, Virgin Orbit’s modified Boeing 747, dubbed Cosmic Girl will carry the Launcher One rocket which carries seven small satellites into low-Earth orbit, blasting off from Spaceport Cornwall’s site at Newquay Airport Cornwall in a so-called horizontal launch. It comes after the first rocket launch from British soil had been delayed for months as the spaceport awaited the approval of the Civil Aviation Authority (CAA).

Spaceport Cornwall said in a statement: “We can confirm that Spaceport Cornwall has received the UK’s first ever spaceport licence. Cornwall is now ready to open up the use of Space for Good, and support the UK industry in harnessing the power of space to benefit life on Earth.

“Spaceport Cornwall receiving its license means Virgin Orbit can begin to conduct various mission readiness tests.  In terms of a launch date, everyone is working towards a successful mission in the coming weeks.”

The decision has cleared a key hurdle that had been delaying the maiden satellite launch after industry sources lashed out over the slow progress of signing off the debut rocket launch. The CAA defended its process as it claimed it was committed to securing a safe mission.

Earlier, there had been plans for the launch to honour the Queen’s Platinum Jubilee, with hopes that the rocket would take-off from the southwest coast in the summer. But despite the delay, the CAA has said that its approval marks a special moment in history.

Richard Moriarty, Chief Executive of the CAA, said: “This is a historic moment as we licence the first ever spaceport in the UK. We’re proud to be playing our part in facilitating the UK’s space ambitions by assessing the safety, security and other requirements of these activities. This is another major milestone to enable this country to become a leading launch nation.

“When we became the space regulator, we committed to delivering in an open, effective and proportionate way, with public safety at its heart. Our work does not stop with this licence decision as we continue to assess other licence applications and oversee the effectiveness of licenced activities, all enabling the UK’s space sector to grow safely and securely.”

The approval comes after Spaceport Cornwall reportedly proved to the regulator that it met the appropriate safety, security, environment and other aspects to operate a UK spaceport. The approval has also shown that Spaceport Cornwall has the infrastructure, equipment and services for horizontal space launches.

Melissa Thorpe, Head of Spaceport Cornwall, said: “To be the first Spaceport in the UK with a licence to operate is a historic moment. The regulatory environment created by the Civil Aviation Authority ensures that UK launch will set the global bar in terms of responsibility and transparency.

“Cornwall is now ready to open up the use of Space for Good, and support the UK industry in harnessing the power of space to benefit life on Earth.”

He said: “The cosmic cornerstone is being laid for the UK’s first orbital space launch, with the UK Civil Aviation Authority granting Spaceport Cornwall the first ever spaceport licence.

“Virgin Orbit’s planned launch reinforces our position as a leading space nation as we look to the future of spaceflight, which can spur growth and innovation across the sector, as well as creating thousands of jobs and apprenticeships.”

Speaking exclusively to Express.co.uk last month, Ms Thorpe explained how people can come down to Cornwall and watch the historic event unfold. Spectators can head down to the site to watch the midnight launch for the free event if they sign up for a ticket.

She said: “We will have a public event at the airport. It will be at night, but we have a lot of people that want to come and see as much as they possibly can.

“We are going to have an area where people can come and safely watch the take-off, we will have big screen TVs up with cameras on the rocket and the satellites themselves. It will be a mixed production in terms of the sound and the smell of the airfield. But the visuals, as it will be at night, a lot of it will come from the screen.

“When asked how many people will be allowed to come and watch, Ms Thorpe said: “It is hard to know until we test the waters a little bit. We are just finalising the plans for the area. We are going to ticket it, but for free, just so we can gauge numbers. We will put batches of tickets out over the coming weeks if they are interested.”