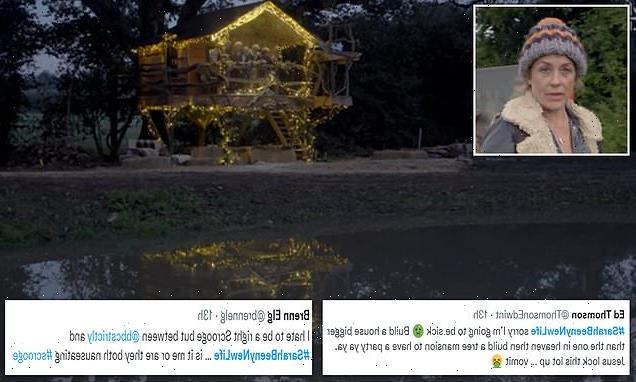 ‘This is nauseating!’ Sarah Beeny’s New Life in the Country viewers slam presenter for boasting about building a ‘garish tree house mansion’ on her 220 acre estate for Christmas party

The programme, which aired on Channel 4 at 8pm on Tuesday, was the Christmas special in the series documenting Sarah as she transforms a semi-derelict former dairy farm on 220 acres of Somerset countryside into her luxury dream house – dubbed a ‘contemporary take on the classical English stately home’.

The show saw the family, including husband Graham Swift and their four boys Laurie, Charlie, Rafferty and Billy, set out to build Sarah’s dream treehouse on the land.

However many of those watching were left horrified by the family’s treehouse, with one saying: ‘Sorry, I’m going to be sick. Build a house bigger than the one in heaven, then build a tree mansion to have a party ya ya? Jesus lock this lot up…vomit.’ 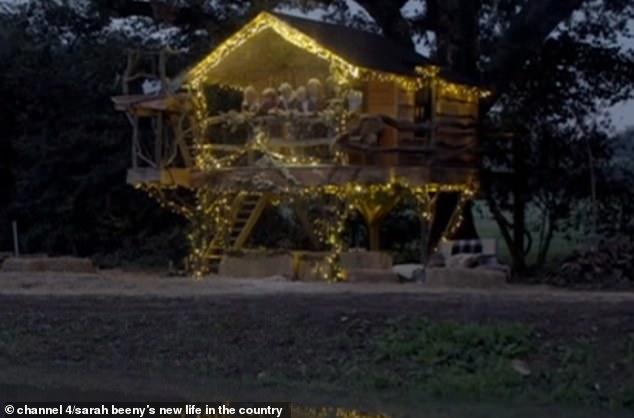 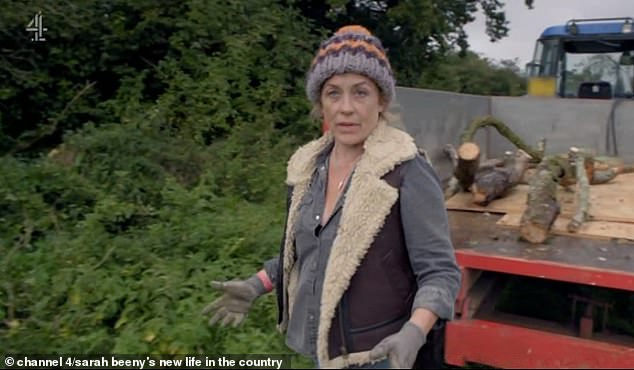 The show saw the family, including husband Graham Swift and their four boys Laurie, Charlie, Rafferty and Billy, set out to build Sarah’s dream treehouse on the land

Another added: ‘The only reason I’ll miss this awful fake programme is for the Twitter comments. Please never, ever return.’

In early autumn, the family began preparing to build a ‘winter wonderland’ for Christmas – and this year, Sarah decided to fulfil a childhood wish.

One of her son’s explained: ‘Mum has always wanted a treehouse and I think moving to the country was the perfect opportunity to do that.’

Sarah said she wanted it to be like a ‘James Bond Austrian ski chalet’, while the boys and her husband Graham were determined to help out. 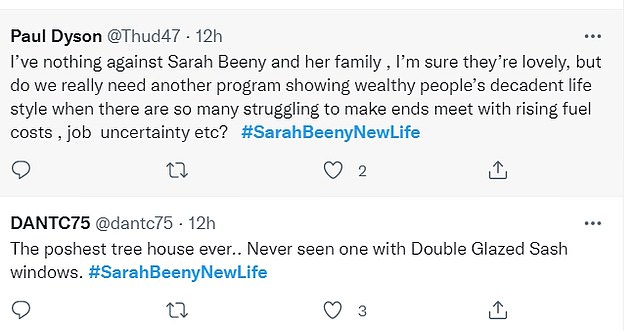 Many of those watching said the programme was ‘faux Christmas rubbish’, with some calling it ‘nauseating’

Meanwhile she added she wanted to throw a party for the family over the festive season, saying: ‘I think spending time together is so much more important than presents.’

It wasn’t long before the build for the treehouse was well underway, with a specialist team installing a sturdy platform while the boys helped out with the walls.

After a week, the walls and windows were in position, and there was a pitched roof.

Sarah explained: ‘The whole thing has been built to have the right number of these floor tiles which I got second-hand.

‘Most people think a tree-house is for kids, but this isn’t – this is for me!’

Graham helped Sarah to fit the hand-rails on the build, with Sarah saying: ‘We’re basically putting all the stuff we have gathered from round the farm.’ 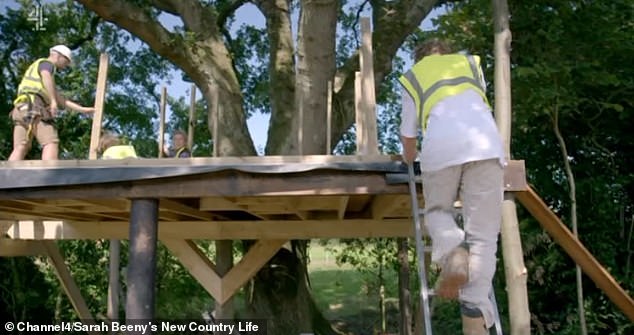 Sarah said she wanted it to be like a ‘James Bond Austrian ski chalet’, while the boys and her husband Graham were determined to help out

‘I’m so looking forward to it being finished, it’s going to be great.’

As the treehouse slowly came together, Sarah began decorating the space for her Christmas party.

She said: ‘This is the first party we’ve had since we’ve been down here and the first one in the treehouse. I do want it to be really magical.’

With the outside of the treehouse done, 15-year-old Charlie and 17-year-old Billy made a start on the interior. 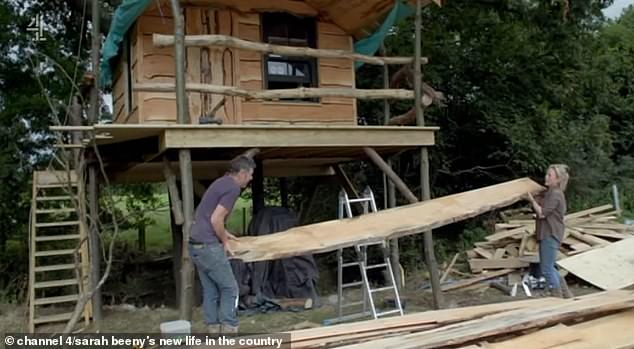 It wasn’t long before the build for the treehouse was well underway, with a specialist team installing a sturdy platform while the boys helped out with the walls

Billy said: ‘Mum said we weren’t allowed to come in here with our friends and drink beer, so part of the reason we’re helping out is so that we can.’

By the eve of the Christmas party, Sarah, as the host, had a bout of the jitters.

She said: ‘I’m hoping when it’s stuffed full of things, it’ll be looking really beautiful. But I have a feeling we might be pulling a late one tonight.’

As they finished off the treehouse, Sarah prepared to show the boys the finishing touches.

And her four sons were blown away by the space, with Laurie saying: ‘I think the treehouse is awesome, I’ve never seen it with al; this stuff in it.’ 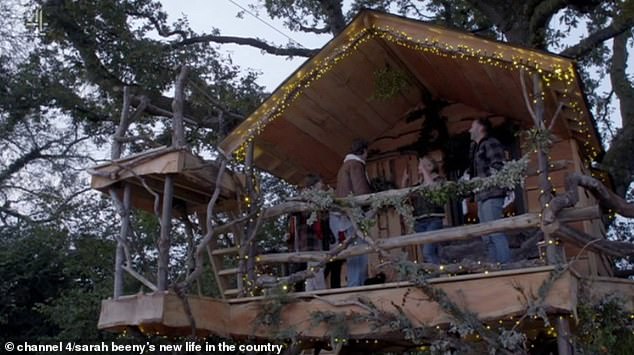 By the eve of the Christmas party, Sarah, as the host, hung fairy lights around the treehouse – and confessed she had a bout of the jitters

It wasn’t long before the rest of her family arrived for the party, with Sarah saying: ‘Evenings like tonight was what moving to the countryside was about. Celebrating with friends and family.’

However many of those watching were less than impressed with the programme, with one writing: ‘This show could be so good but misses the mark every week. I literally fast forward half of it.’

Another said they felt it was ill-timed, with one saying: ‘Hate this faux Christmas rubbish.

‘Many of us are sitting here wondering if Covid will ruin it with four days to go, many will be alone. Many won’t be hugging loved-ones.’ 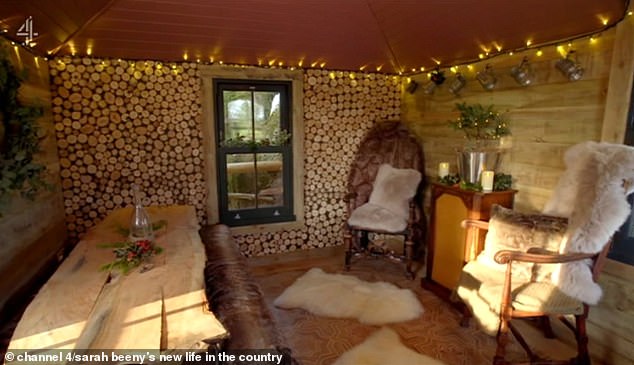 A fourth added: ‘I’ve nothing against Sarah Beeny and her family, I’m sure they’re lovely.

‘But do we really need another programme showing wealthy people’s decadent life styles when there are so many struggling to make ends meet with rising fuel costs, job uncertainty etc?’