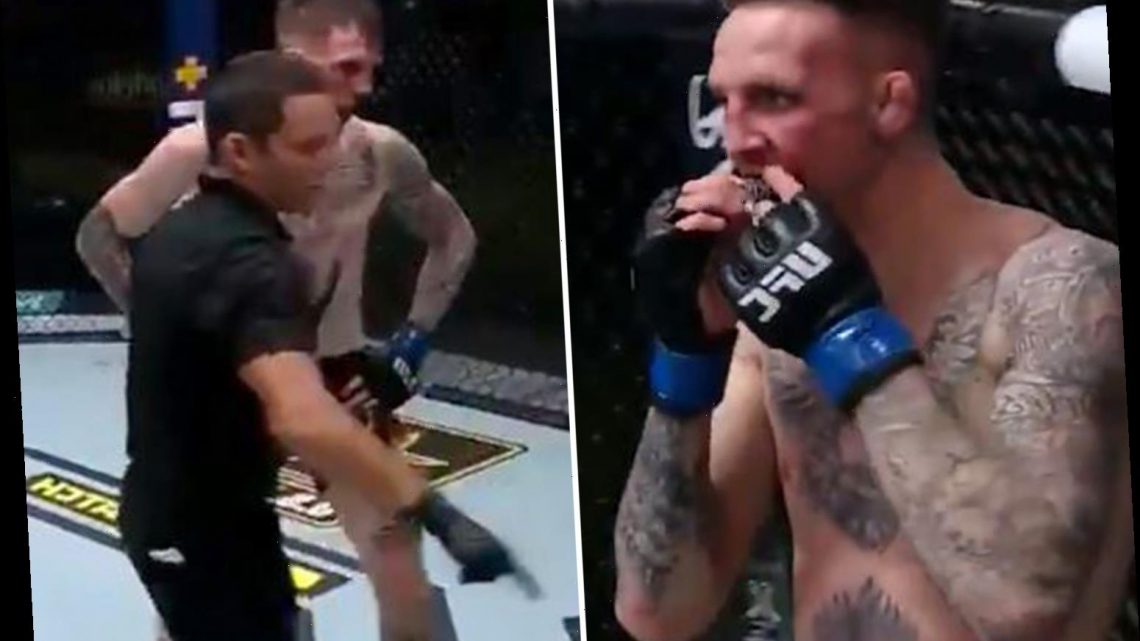 THIS is the bizarre moment UFC coaches were forced to climb under the cage to retrieve a GUMSHIELD after it flew out mid-fight.

UFC welterweight Alex Morono picked up a decision victory over Rhys McKee but the pair had one of the strangest breaks in action. 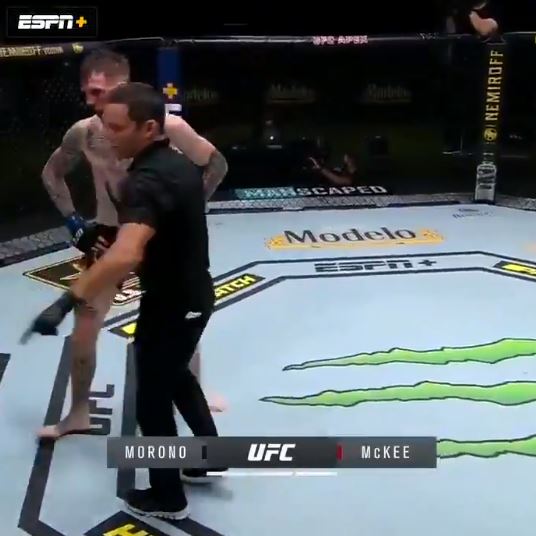 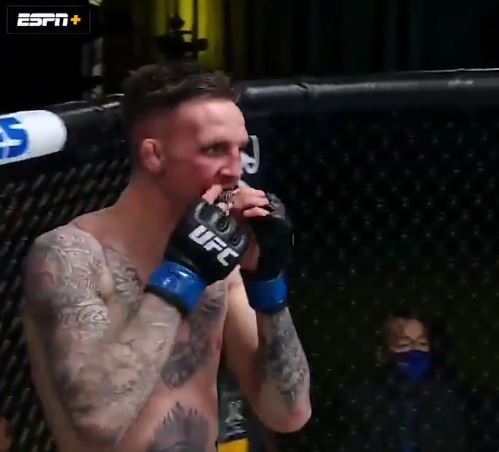 'Skeletor' made his UFC debut back in July and didn't even last a round when he was outclassed by Khamzat Chimaev.

Yet McKee gave a much better account of himself during his second appearance but still came up short against Morono.

But an incredible moment in the third and final round threatened to overshadow his performance when his gumshield went flying out.

While fighters losing their mouthpieces is common practice in MMA, staff at UFC Fight Night: Felder vs Dos Anjos couldn't find it in the Octagon.

Eventually, the gumshield was located under the cage and bizarre scenes saw coaches scrambling to rinse it before McKee had it back in his mouth.

One fan tweeted: "Can't wait to see this in every mma YouTube video this week. Deff never seen anything like that before.

"That aside that was one hell of a dog fight. No losers in that one."

Another said: "We needed Joe Rogans commentary here to laugh at those officials like with the ice bucket incident."

It’s funny I brought a back-up mouthpiece but it’s at the hotel so I mean I don’t know, that was a weird one. Didn’t know what to think

A third added: "Wow, no doc or other medical personal had a spare mouthpiece smh."

Morono later admitted the gumshield incident gave both fighters the chance to take a sizeable breather during the bout.

The 18-6 star said: “That was nobody’s fault. I guess I took a breath, you know. I wasn’t tired, you know I looked tired.

“When I fought Jordan Mean, that fight finished and I was not tired and I was extraordinarily disappointed in myself. If I’m not tired going into the third round then I have not fought hard enough.

“I could have fought another two rounds if I had to and that was certainly strange.

“It’s funny I brought a back-up mouthpiece but it’s at the hotel so I mean I don’t know, that was a weird one. Didn’t know what to think. First time I had an experience like that before.”

11/30/2020
Did Meghan Markle and Prince Harry Tell the Royal Family About Their Miscarriage? 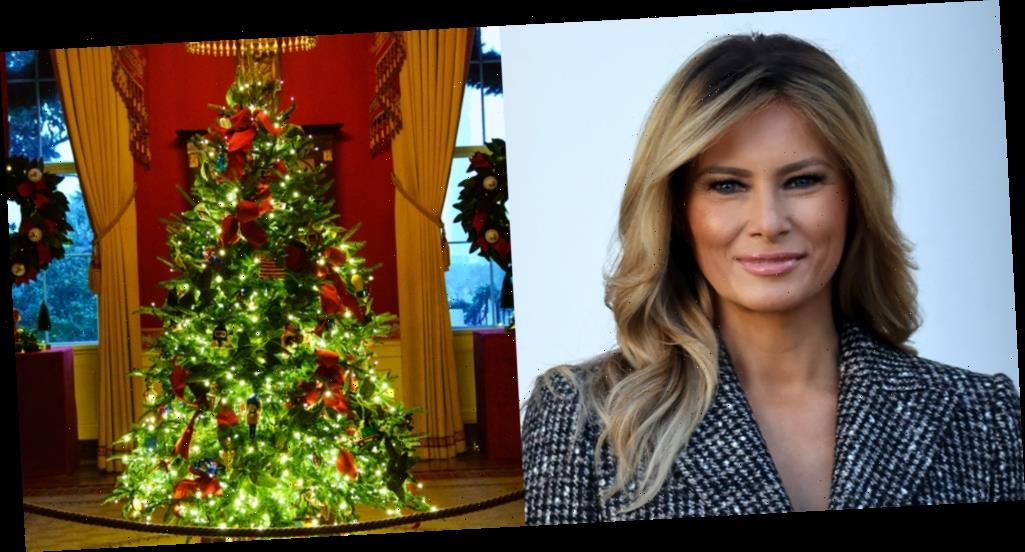 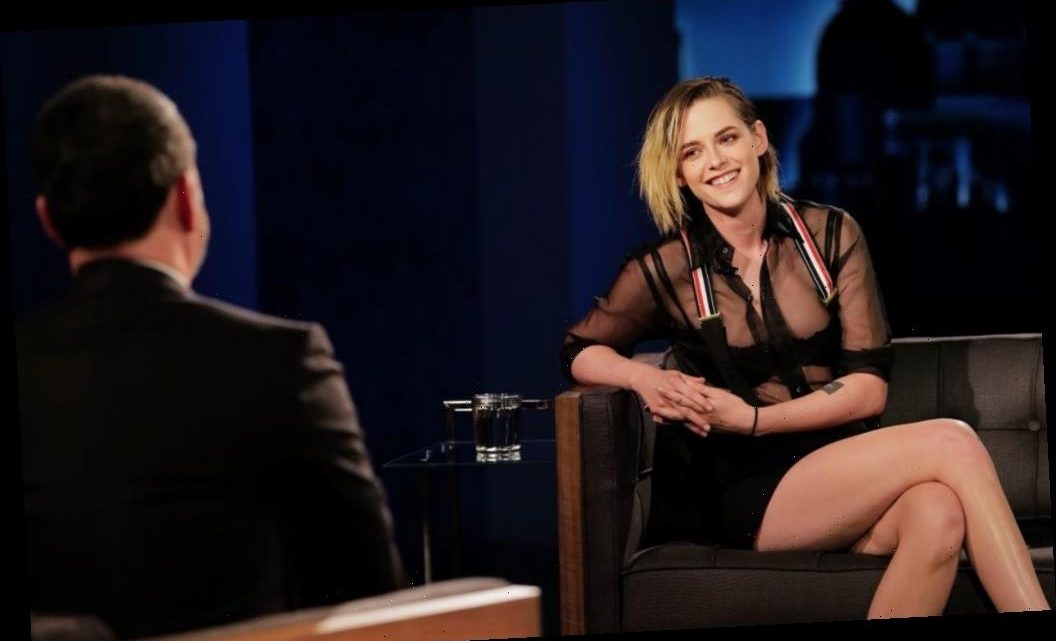 11/30/2020
'Twilight': Kristen Stewart Thought the Movie Sounded 'Very Shallow' and 'Vain' at First
This website uses cookies to improve your user experience and to provide you with advertisements that are relevant to your interests. By continuing to browse the site you are agreeing to our use of cookies.Ok