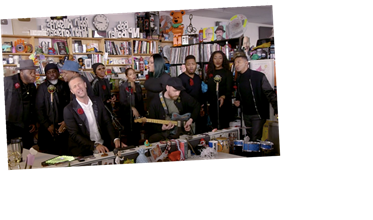 Coldplay used their NPR Tiny Desk Concert as an opportunity to cover Prince’s “1999.” The band, who also played their own “Cry Cry Cry,” “Viva La Vida,” “Broken” and “Champion Of The World,” was joined by the nine-piece For Love Choir. See the full concert here.

“Cry Cry Cry,” “Broken” and “Champion of the World” come off the band’s recent album, Everyday Life, which dropped in November. Some of the For Love Choir members joined Coldplay in the studio to record the album, causing single Chris Martin to note during the NPR clip, “In a very real way, they’ve Photoshopped our songs to be much better than they actually are.”

Coldplay recently released a music video for “Champions of the World,” directed by French filmmaker Cloé Bailly and filmed in Los Angeles. Previous singles from the LP include “Orphans,” “Arabesque,” the title track, “Daddy” and “Cry Cry Cry,” which was accompanied by a music video co-directed by Martin’s partner, Dakota Johnson, along with Cory Bailey. Shortly after releasing Everyday Life, the band announced that they have put a pause on touring the album until they can feasibly tour with zero carbon emissions.