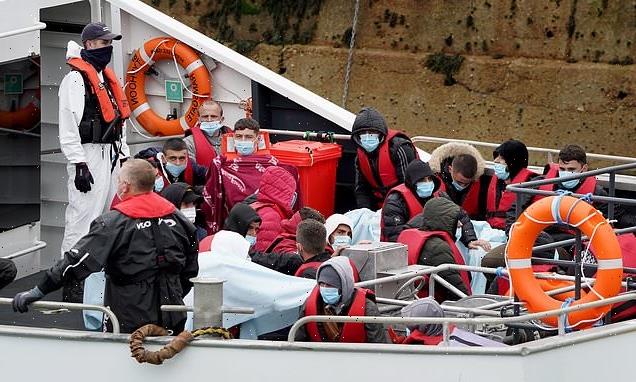 Why we’re still paying the price of Labour’s drive to ‘rub the Right’s nose in diversity’: Far from carrying out their duties to implement government guidelines on immigration, some in the Civil Service are working to undermine them, writes DR ALAN MENDOZA

This morning at 10.30am, an emergency High Court hearing will consider the legal challenge to Home Secretary Priti Patel’s plan to send 130 migrants to the Rwanda while their applications for asylum in Britain are processed.

If this challenge is ultimately upheld, it will wreck the Rwanda experiment before it has even been tried. The plan, set up in partnership with the Rwandan government, will never be attempted again.

Yesterday’s The Guardian newspaper predicted gleefully that if the flight is postponed, the people booked on it will be issued with electronic tags and given their freedom.

All are ‘irregular migrants’ – people who arrived by boat or lorry – almost certainly after handing a hefty fee to a people-smuggling gang.

What safeguards exist to prevent these people from simply snipping off their tags and melting into the background is not clear. Under a legal precedent known as the ‘Hardial Singh principles’, the Home Office’s powers to detain people indefinitely are severely curtailed. 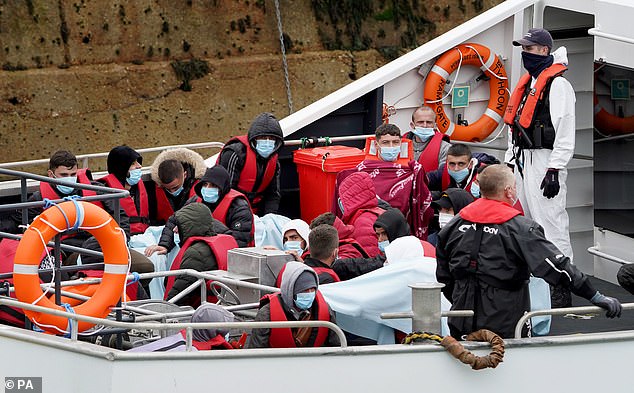 The legal tactics, plus a raft of appeals lodged on behalf of individual migrants, are likely to lead to the flight being postponed pending resolution of the issues in court 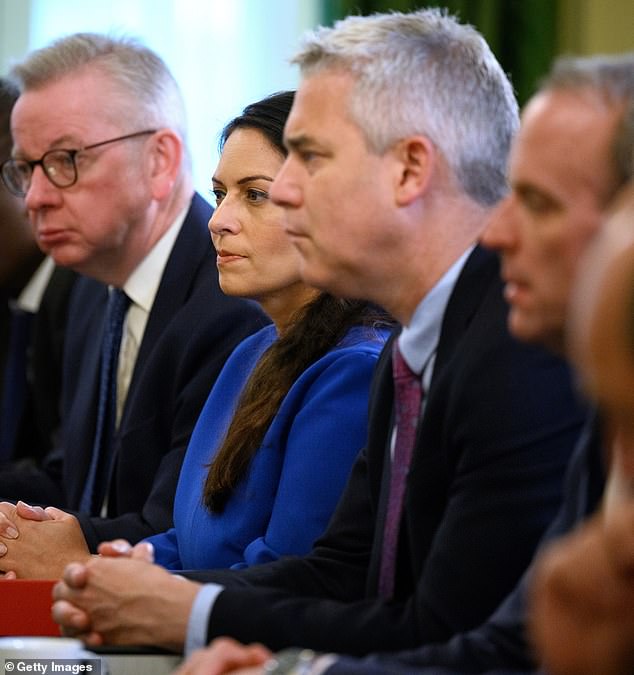 Home Secretary Priti Patel listens as Britain’s Prime Minister Boris Johnson addresses his Cabinet on Tuesday. She sits between Levelling Up Secretary Michael Gove  and Chancellor of the Duchy of Lancaster Steve Barclay

This suits many subversives within the Home Office, of course. Far from carrying out their duties to implement government guidelines on immigration, some in the Civil Service are working actively, and covertly, to undermine them.

Indeed, an anonymous ‘Our Home Office’ Twitter account was launched last month with a poster said to have been posted on an official noticeboard which reads: ‘We have the spine to say, ‘No minister’. No to hostile environments, no to shutting down democracy, no to racist deportations.’

It even offers stickers that proclaim ‘Refugees Welcome’ and these have begun to appear in the Home Office.

One virtue-signalling civil servant, who lacked the courage to be identified, told Sky News this week that processing asylum claims in Africa was akin to people-trafficking.

‘We should offer sanctuary and provide safe haven for those who need it,’ the civil servant said. ‘But it feels like we are taking part in human trafficking – transporting people against their will and paying another country to take them.’

But as a result of Left-wing activism, Britain’s immigration policy is in abject chaos. More than 10,000 migrants have made the perilous sea crossing from northern France so far this year, which means that hundreds of lives are at risk every day from drowning.

That total is more than twice as many as by early June last year. And that is just the migrants that border patrols have spotted. Thousands more will be entering the country crammed into container lorries, often without food or water and with barely enough air.

Organised criminal gangs of people-traffickers are extorting millions of pounds from the very migrants whose lives are being put in danger. 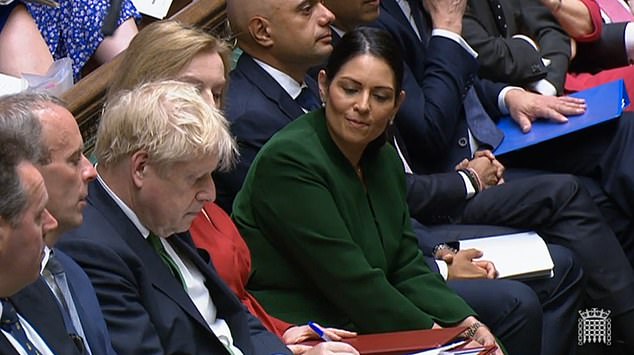 Many who think they are coming to Britain to enjoy our country’s unique freedoms will find themselves in a lifetime of debt, or coerced into modern-day slavery as labourers and sex workers. The situation is inhumane beyond belief. Its roots lie in the deliberate choice by New Labour, after 1997, to engineer mass immigration. Former Labour adviser Andrew Neather notoriously said this was a policy devised to ‘rub the Right’s nose in diversity’ – that is, to change the UK’s ethnic make-up as a taunt to Middle England.

Labour’s secret calculation was that this would mean more votes for the Left. Instead, it was a policy that backfired spectacularly as it was working-class communities who watched as their schools grew more overcrowded, their GPs oversubscribed and waiting lists for social housing grew ever longer.

Many would argue it led directly to Brexit and a landslide for the Conservatives in 2019. And nor will Labour benefit in the long term as statistics show that once immigrant families become well established and settled, they tend to vote Tory.

Lord Mandelson, the former secretary of state for business, told a think-tank rally: ‘In 2004, we were not only welcoming people to come into this country to work, we were sending out search parties.’ 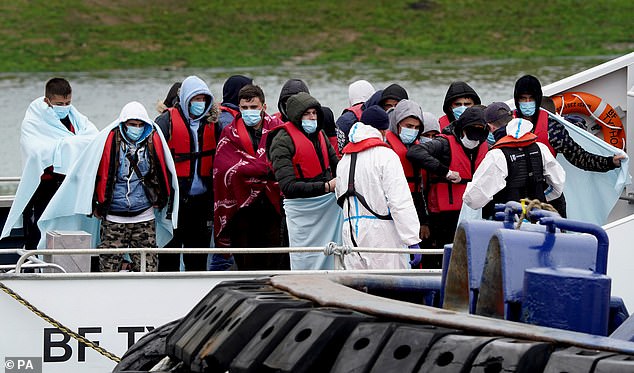 A group of people thought to be migrants are brought in to Dover, Kent, onboard a Border Force vessel following a small boat incident in the Channel on June 7

And it laid the foundations of the ‘immigration industry’ – an unholy partnership between greedy lawyers, naive charity workers, self-indulgent civil servants and rapacious criminals.

Yet Left-wing charities and self-appointed ‘human rights activists’ continue to thwart every effort the Government makes to address this crisis.

To these professional liberals, it seems that the only acceptable immigration policy is one that allows every migrant unrestricted passage to Britain, regardless of the chaos that will cause.

No other interpretation can be placed on the Rwanda challenge. It is devoid of any logic other than a determination to see the scheme wrecked.

Rwanda is a Commonwealth country, one that has made enormous strides in rebuilding itself since the genocidal civil war in 1994. It is safe, civilised and friendly. Its track record on ensuring women are represented at every level of government is outstanding.

For anyone facing persecution, religious oppression, sexual torture or death in their home country, Rwanda’s capital Kigali can be the safest of havens.

Because full details of the Home Secretary’s plan have not been released, we don’t know whether migrants would be permitted to return to Britain if their application for asylum is successful, or whether they would remain in Rwanda.

Surely either is a blessed alternative to the constant threat of prison or murder at home.

Yet many appear to have come to the conclusion that nothing could be worse. One man in his 40s, identified only as Bahram from Iran, told a Sky reporter that he paid a people trafficker $13,000 (£10,400) to be transported to the UK, to escape jail and torture at home.

But faced with a ticket to Rwanda, he claimed: ‘I cannot even think about it. I have no connection to Rwanda. My safety cannot be guaranteed. I prefer to be back in Iran – I know it’s certain death for me in Iran but I’d rather have that than going to Rwanda.’

If that man’s protests are sincere, and we have no reason to suppose they are not, I shudder to think what horror stories have been fed to him about life in Africa.

Has he been led to imagine that the massacres of the 1990s are still going on? Or, since one part of the legal challenge cites the existence of malaria in East Africa, does he believe he will contract a fatal disease?

I must stress that Britain has a long history of giving refuge to people fleeing violent regimes. We take deep pride in our tradition of welcoming those in need. 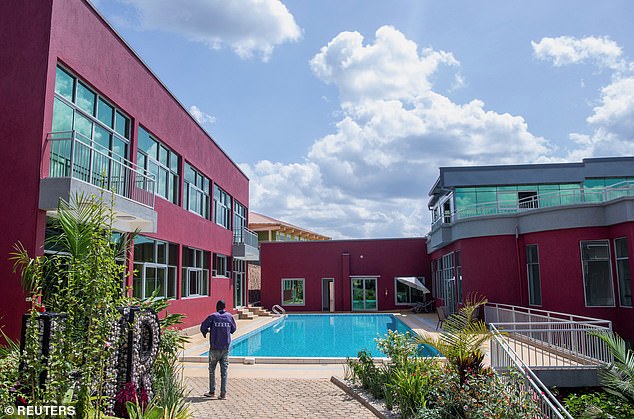 A worker is seen at the Desir Resort Hotel prepared to host asylum seekers sent to Rwanda from Britain, in Kagugu location of Kigali, Rwanda

But if we allow it to be exploited by international criminal gangs of traffickers, that tradition will break down. The very people most in need will be denied the safety of our shores.

The Church of England joins in, with evangelicals urging Muslim migrants in particular to adopt Christianity. The immigrants then claim that they will face religious persecution as apostates in their home countries.

Perhaps some church-goers genuinely believe they are saving souls – but these days there is a school in the Church of England that treats liberalism and not Christianity as the one true religion.

When Priti Patel announced the innovative Rwanda trial last month, I hailed it as the kind of lateral thinking that is urgently needed. Like the Home Secretary herself, I anticipated there would be resistance – what she calls ‘hurdles and barriers’.

But the sheer cynicism of the highly co-ordinated response by charities, social media activists and lawyers has taken my breath away. For many Left-wing opponents of the Government, immigration has become an ideological rather than a humanitarian issue. They are determined to oppose every possible solution, to encourage unrestricted immigration.

They offer no answers, propose no alternatives. As long as the Left keeps sabotaging the Government’s best efforts, ‘irregular migrants’ will continue to drown at sea or suffocate in lorries, while criminals rake in the profits.