"I feel like life's finally getting back to normal." You know when a character says that in the opening moments of a show that things are about to go completely cra-cra. And as with Neighbours, even across a scant 20 minutes there's always a huge variation in the quality of Home and Away, with individual scenes succeeding or failing depending on who's in them. 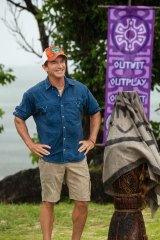 But if nothing else, it's a lesson in how talented actors can transform the same writing and direction that lesser lights leave flat – or unintentionally comical. Oh. And is life really finally getting back to normal? Of course not. Don't be ridiculous.

What's fascinating about the US Survivor (and a lesson to every other legacy reality franchise) is the way it's managed to so successfully refresh and reinvent itself over a mammoth 20 years and 40 seasons. Sometimes that's through mechanical means, as it were. In the early seasons there weren't even immunity idols.

Now there are idols, and idols with special conditions, and location shifts, and all kinds of other twists and tricks. But it's also become the AI of reality television. As Australian Survivor champion Shane Gould noted as she went into All Stars, this is a game that matures and evolves organically, of its own accord, as contestants increasingly become scholars of the process.

That's especially true this season in which all the contestants are previous winners. The benefit is they all know the game inside out. Downside? Everyone else knows their game play. It makes the strategising and psychological manoeuvring every bit as thrilling as the physical challenges.

This classy, good-hearted soap rightly garnered a large and loving audience in season one, and now it's back with its big ensemble, family dramas and multiple plot threads still twisting and dangling. Some will find it disconcerting to discover Pav is no longer played by Marcus Graham but another actor entirely (Rupert Reid). For others, it's deliciously appropriate, and firmly in the tradition to which The Heights belongs.

At the same time, more than most soaps, this series remains grounded in reality, from its housing commission setting to its diverse cast. It's certainly one of the few shows on Australian television that genuinely represents Australian society. Even better, while the writing is often pretty unsophisticated, the way these characters act and react feels authentic.

Walking Dead: How did Beta get into Alexandria? Real route revealed
Recent Posts