Home » Lifestyle » Which Love Island 2021 star gained the most followers on Instagram? 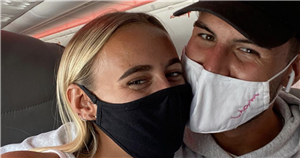 Which Love Island 2021 star gained the most followers on Instagram?

Love Island might be over, but viewers of the hit show can still keep up with the contestants over on their respective social medias.

The stars of the show often go on to gain thousands of followers following their TV success, but whose Instagram following skyrocketed the most after the 2021 series?

There's no doubting the stars would've rushed to check their social followings when they first got their phones back, after weeks of not having their hands on them.

Which Love Island 2021 star gained the most Instagram followers?

Millie Court, who won the series alongside Liam Reardon, has the most followers on Instagram, with 1.4 million following her now.

Just behind her, however, is Liberty Poole with a whopping 1.3 million Instagram fans. Just behind them is blonde bombshell Mary Bedford, who now has a following of 645,000.

For the boys, winner Liam Reardon has just shy of one million, with 937,000 followers on the platform.

The islanders are set to make big earnings from their Love Island success.

Delving into the details, Digital marketing agency 10 Yetis looked at the islanders from this series, to see how much they might earn following the show.

Liberty is leading the way, according to the research, after having a whopping 2,011.48% increase in followers since appearing on Love Island.

The company believe Liberty will have the potential to charge £10,000 plus per sponsored Instagram post on her feed.

This is hardly surprising given the success contestants have after the villa, with some big earners including Molly-Mae Hague and Tommy Fury, and Dani Dyer.

Some former Islanders have made a pretty decent living out of it with many of them now multi millionaires – and that’s without even counting their smaller Instagram brand deals.

Olivia Bowen is by far one of the most successful islanders with a vast amount of brands desperate to work with her.

Molly-Mae Hague too has skyrocketed to success following her Love Island days, and recently became the Creative Director for PrettyLittleThing.

For more showbiz news, and to keep up with your Love Island favourites, sign up to OK!'s daily newsletter here

‘Never Have I Ever’: Actor Megan Suri Would Love To Have This Hollywood Actor Narrate for Her Character