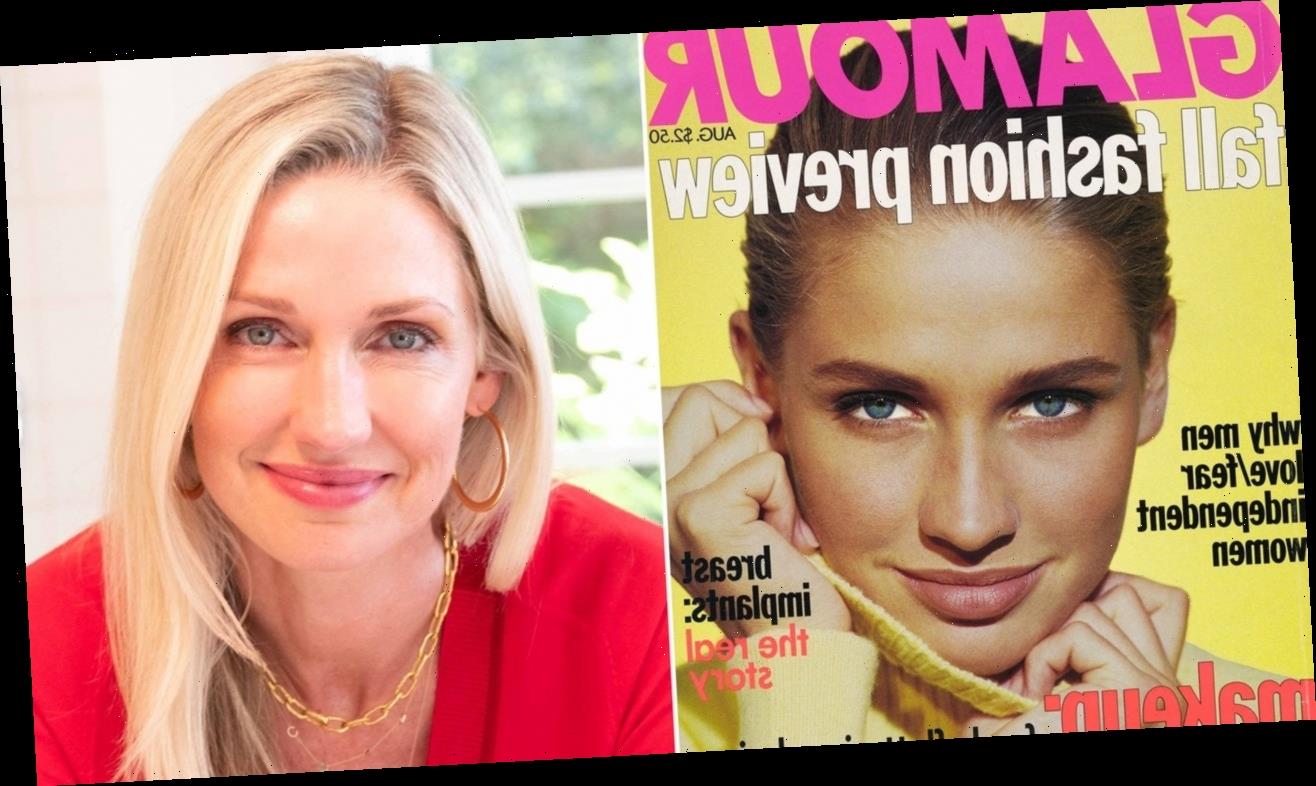 In August 1991, Catherine McCord appeared on her first cover of Glamour *magazine (followed by the coveted September issue cover a year later). A successful model in the '80s and '90s, McCord also appeared in campaigns for Victoria's Secret and Calvin Klein. Now in her mid-40's, she's the founder of heathy-eating website, Weelicious, and organic family-friendly food delivery service, One Potato. McCord is also a mom of three—two girls and a boy—and is navigating what it means to be a parent in the digital age. Particularly, how to make sure her kids avoid some of the pitfalls she experienced working in looks-based industry.

Here, in what she calls a "beautiful, full-circle" moment ("Glamour was my first cover, and it's so dear to who I am and what did it for me," she says), she opens up to West Coast editor Jessica Radloff about those lessons and more.

Up until I was 13 or 14, I was long legs Lucy. It was, ‘Oh, you're so skinny,’ or ‘Oh, you're so tall.’ And people didn’t mean it in a good way. I was 5'11 and there was a lot of teasing, which was so painful. I always wanted to be cute and shorter. But then when I hit high school, it all changed. People started saying, 'She's so pretty!' I didn’t necessarily trust those comments, but people started encouraging me to try modeling and eventually, I agreed. I ended up winning the best personality award in a prestigious modeling contest, and that helped build up my confidence. I could do this, I thought. 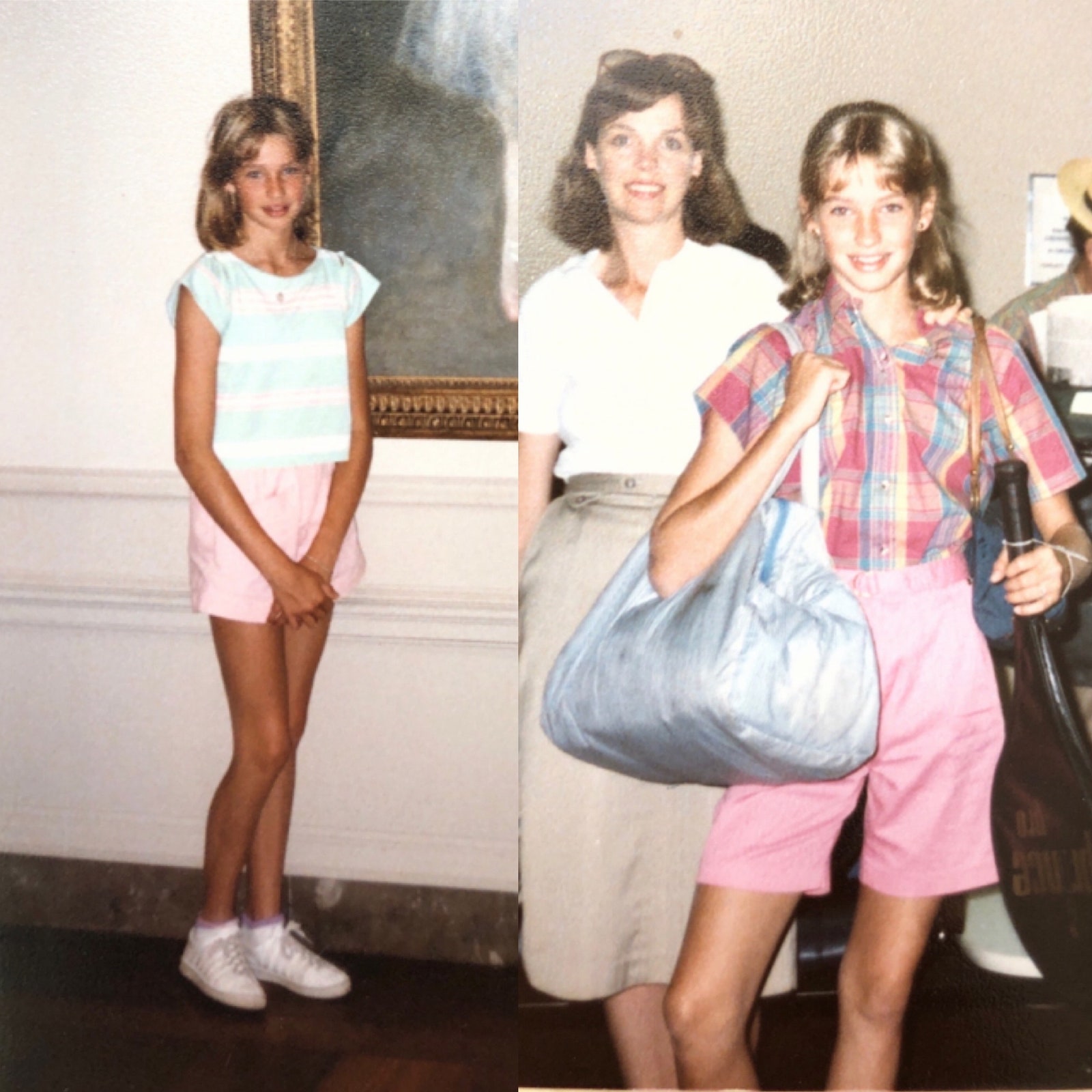 Catherine in her pre-teen years.

At the end of senior year of high school, I started doing runway modeling, which is basically the equivalent of throwing your clothes off every two seconds. My body, and being comfortable in it, became such a big focus. Eventually, I started modeling for Victoria’s Secret and doing lingerie shoots. The focus on my body got even more intense. Before my first VS runway show, I booked a lymphatic drainage treatment to help me lose every ounce possible. I roll my eyes now, but when you are walking on a runway in your underwear, it definitely makes you self-conscious.

Still, I loved eating. In fact, I was fascinated with food. But I also remember the diet craze feeling pretty inescapable.

In my late teens, I worked out six days a week. I started exercising for the right reason, to feel stronger, but it became about burning calories and abusing my body. I would stay on the treadmill for an hour, and honestly, no one needs to be on a treadmill that long. I felt that I was losing control, and a lot of that was because I had no control over my life. I was always told where to go, what to do, and traveling all over. 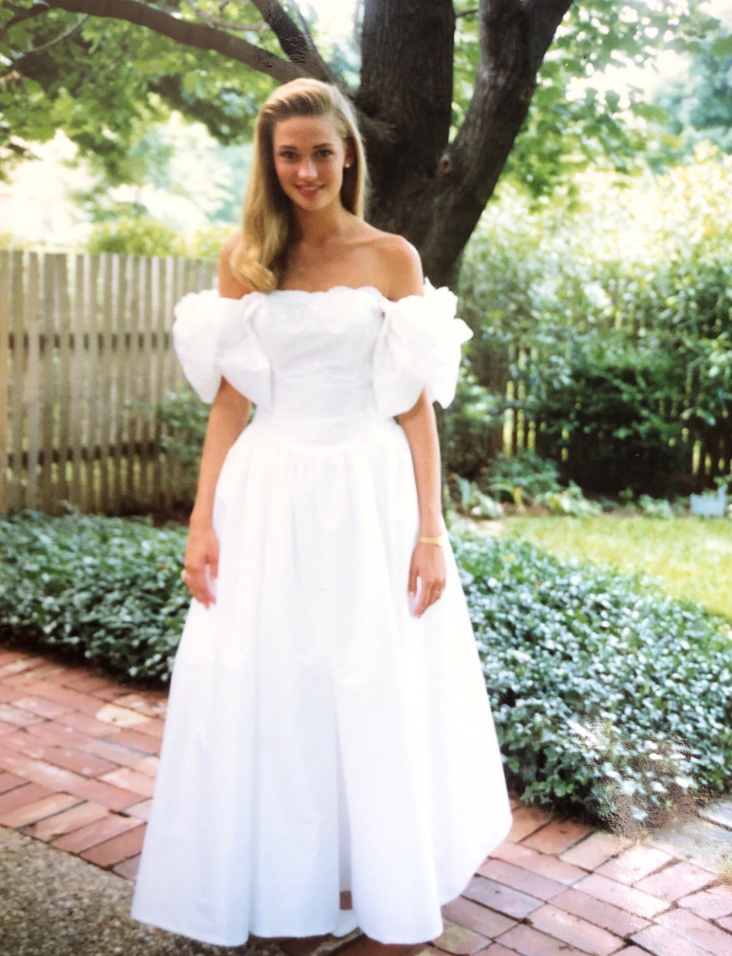 I don’t know if I could say I ever had an eating disorder, but I certainly had issues with body dysmorphia. I felt lonely and unhappy.

Eventually I went from modeling to hosting and even had some acting roles. But when I met my now husband, I realized I wanted to do something in the food industry. I'd always wanted to go to culinary school, which seemed out of left field, but when 9/11 happened it was a wakeup call that life is too short not to do what makes you happy. I ended up enrolling in the Institute of Culinary Education weeks later.

By the end of the decade, I was pregnant with my daughter, who is now 13. I also have a 10-year-old son and a 4-year-old daughter. I like my kids to taste everything, to come to the farmers market with me, and get familiar with all different foods. They’re all very different eaters, but for the most part, they enjoy everything. I'm still fascinated by food and I try to pass that healthy curiosity on to my kids. 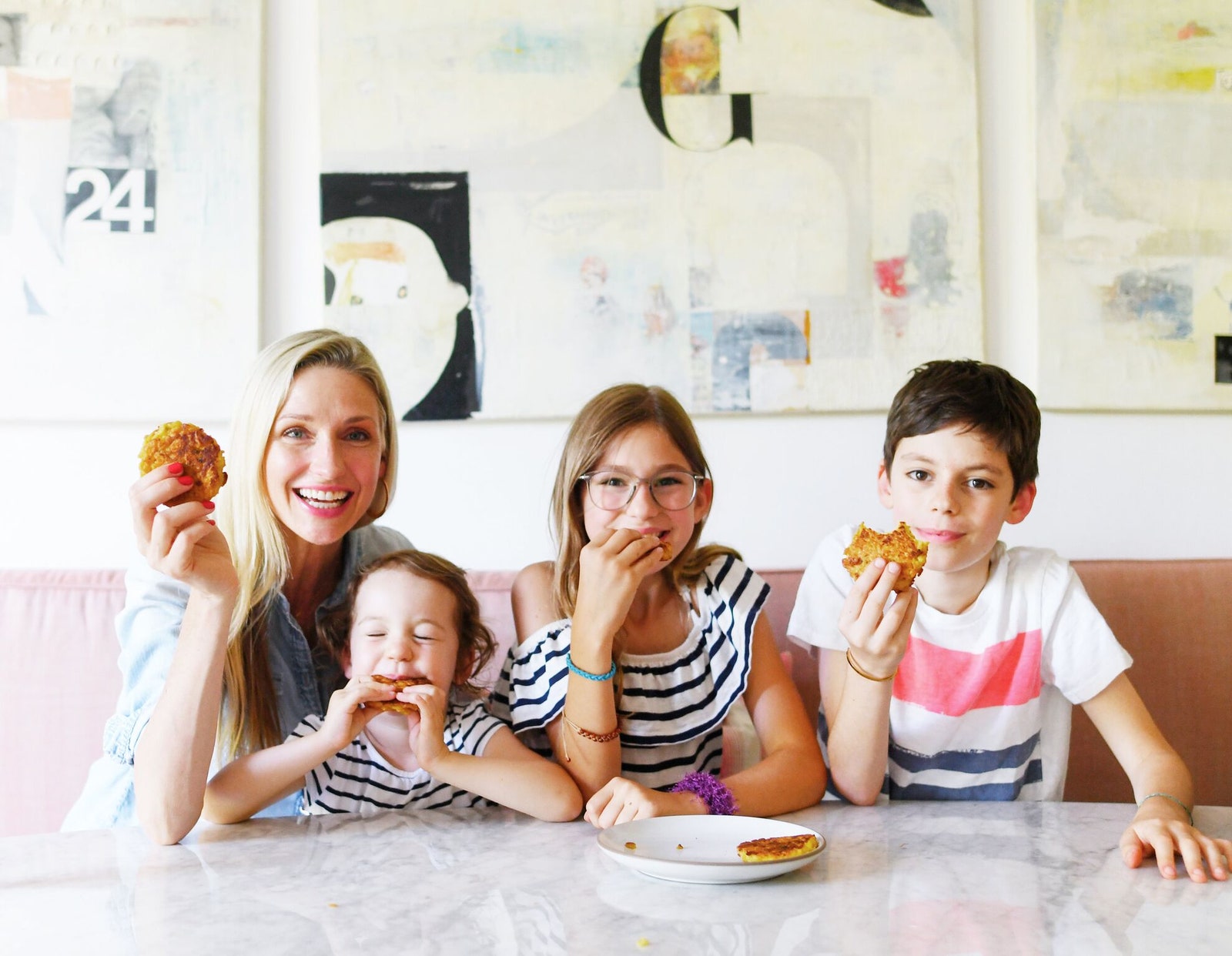 It’s only as my eldest daughter has entered her pre-teen years that I’m much more concerned with making sure she has the proper mindset about food and the relationship to her body. The pressure on these kids starts so young. It was challenging enough just having magazines when I was growing up, and now it’s an entirely different world.

But there is hope. I read a study that said that a girl's number one influence for her own body image is her mother. So, any time a woman puts herself down, her daughter is getting that direct reinforcement to feel that way about her own body. That’s where the body dysmorphia starts. It's a good reminder: If I portray a good, healthy relationship with food and body image for myself, then hopefully that will lead my girls towards having a healthy body image as well. Any time I’ve had my own moment of wanting to shame myself out loud, I really do stop and censor myself because it’s information my kids don’t need to hear.

As part of that, I think all scales should be banned. It's abusive because there are so many factors that contribute to your weight, like water retention, your period, a big meal from the night before. We don't have one in our house.

I'm often asked if I'll show my kids the pictures from my modeling days. My oldest daughter has seen a little bit, but I don’t like to overly talk about it with any of my kids. What I am trying to teach my children is to never comment on anyone else's body or appearance. I want my kids to be happy with their beautiful bodies however they look.

That's why I don't allow the words "fat" and "skinny" to be mentioned in my house. Are you happy? If you're happy, that's what I want to hear. That’s the goal. I was always judged as a kid. I don't want my daughters to ever feel like they have to impress me and my husband. I just want them to just be themselves. Even girlfriends of mine who have gone through breakups or divorces say, ‘Well, at least I’m going to get skinny because I don’t have an appetite.’ And I’m like, that’s the worst thing to say. It’s not actually positive to live in that space of thinking that way because all it does is get them more in their head. And most people who comment on weight aren’t feeling good about themselves. So why project that?

I look at every meal as a lesson for learning about good food. I mean, look, is sugar the best? No, but it's also in endless foods that kids want. So I preach balance to my kids. You just have to appreciate each food for what it does in your body and all of your senses.

Pop an emoji for your favorite animal! ?????? Want to jazz up school lunch in an easy way? Animal Face Toast (swipe to see all of them up close!) Link in bio to make it ???? https://weelicious.com/animal-face-toast-recipe/

Turns out, kids are naturally pretty good at this. They know when to stop eating for the most part. It’s once we get into adulthood that we let our emotions rule the way that we eat, and absorb messages about what's "good" and "bad." That's when food can take over. I want my kids to learn to be mindful eaters—and to enjoy food, and their bodies, without feeling judged. 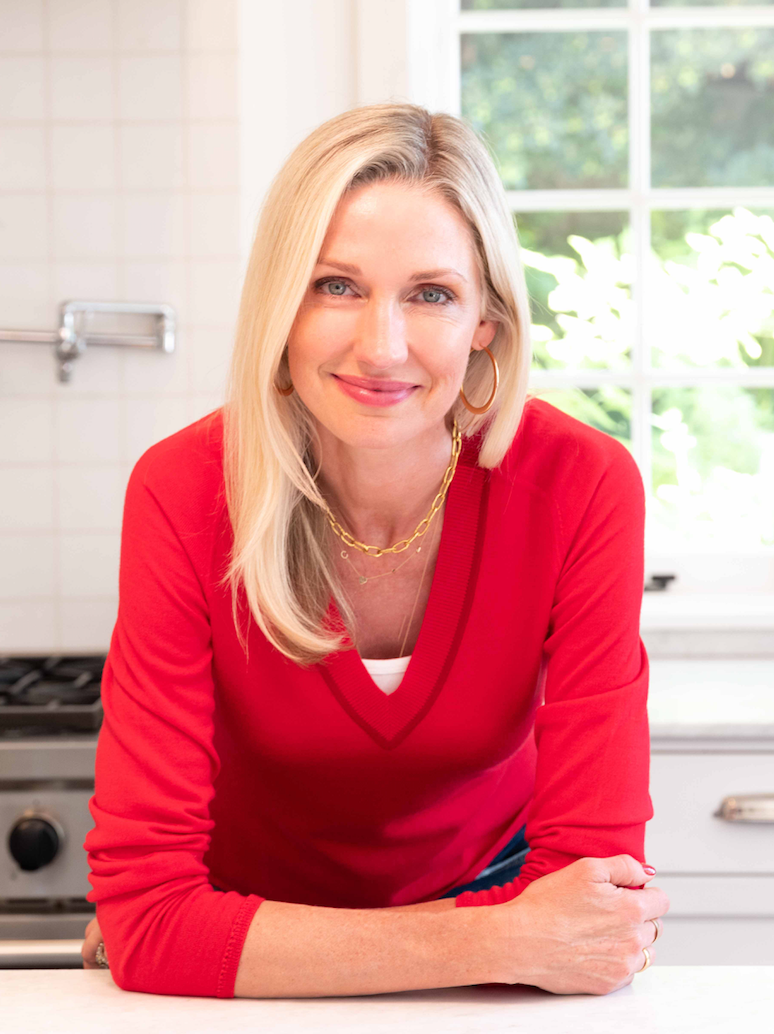