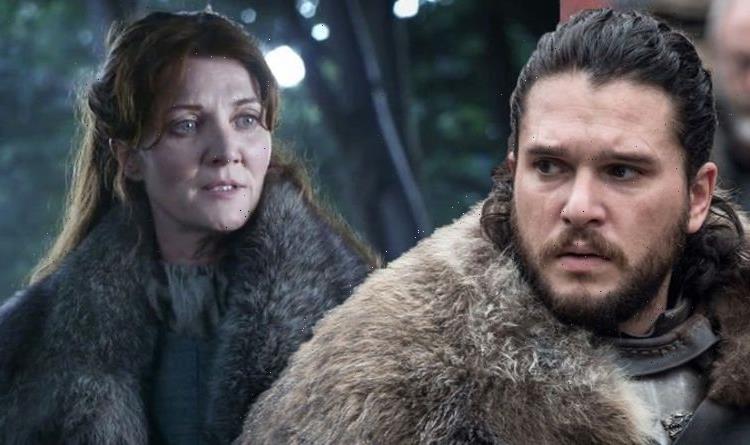 Winds of Winter theory: Jon Snow will be resurrected by Lady Stoneheart

Although George RR Martin’s Winds of Winter does not yet have a release date, theories about the upcoming book are being explored thoroughly by the series’ fandom. The final moments of the fifth book in the series, A Dance With Dragons, detailed Jon Snow being murdered by the mutineers of the Night’s Watch. The HBO TV show Game of Thrones later showed Jon Snow being resurrected by Melisandre, an event that could be translated differently in the books.

While Melisandre could certainly bring Jon Snow back, she is not the only character in the A Song of Ice and Fire series who has that power.

Instead, Jon could be brought back by Catelyn Stark.

Catelyn was killed off in A Storm of Swords at the Red Wedding, alongside her son, Robb Stark.

The matriarch of the Stark family has since made a return, however, as the resurrected Lady Stoneheart, alongside the Brotherhood Without Banners.

Included in this group of people is Thoros of Myr, the priest who brought Catelyn back from the dead.

Jon and Catelyn have always had an extremely strained relationship.

The latter has always known Jon simply as Ned Stark’s bastard child whom he brought home after a war.

But, since Jon’s lineage is no doubt borne of both Stark and Targaryen heritage, he is the rightful king of Westeros.

What do you think? Will Lady Stoneheart give up her life for Jon Snow? Join the debate in the comments section here

If Catelyn were to sacrifice her own undeath to bring Jon back to life, she would be able to inadvertently dethrone the Lannisters, who currently hold the Iron Throne.

Jon’s return would allow him to not only reclaim Westeros but save his friends from the looming threat of the White Walkers.

Of course, this would also kill off Catelyn for the second time.

However, considering she would ultimately be using her death as a way to take down Cersei Lannister, the woman who killed her and her family, she probably doesn’t mind.

Winds of Winter may still be quite far away from store shelves, as Martin recently touched upon how “behind” he is in writing it.

The author of the series posted on his blog site earlier this year where he gave his fans an update on his progress.

He wrote: “Way back when on LiveJournal, when I started this column or journal or whatever it is, I called it my ‘Not A Blog,’ because I could see that regular blogging was a lot of work, and I didn’t think I had the time to devote to it.

“I was late on a book even then, though I do not recall which one.”

Martin continued: “Somehow, though, over the decades, the Not A Blog became a blog, and what I had intended as an occasional pleasure and a way to stay in touch with my readers has become a Blog (ironically, at the same time as everyone else was abandoning their blogs for Facebook and Twitter), complete with a sense of obligation.

“And when a lot of stuff happens very fast, I fall further and further behind. I am hugely behind right now.

“And the prospect of trying to catch up is feeling increasingly oppressive. My life has become one of extremes these past few months.”

The Winds of Winter does not have a release date.

R. Kelly Insists Herpes Is Not STD as He Seeks to Throw Out Charges