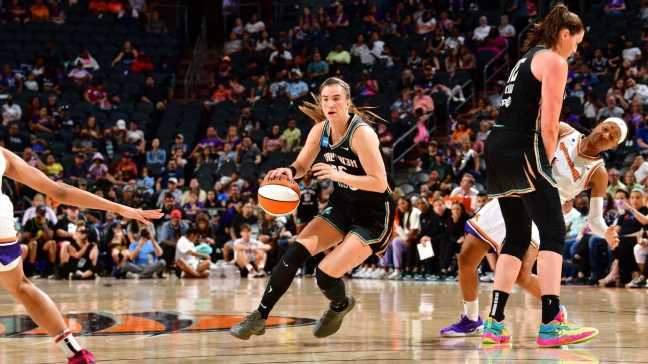 Fantasy Need to Know: The Wings dealt with a plethora of injuries going into the Break, but both Allisha Gray and Satou Sabally returned for the last couple games. Sabally was on a minutes restriction in those two games, but it’s unclear whether the restriction may be eased coming out of the break. Isabelle Harrison (available in 55.9% of leagues) has been starting in Sabally’s place, but only averaged 11 MPG in those last two games even with Sabally limited. It may be safest to sit both for this game, until we get some evidence as to the team’s rotation moving forward.

Tina Charles came off the bench in all five of her games with the Storm before the Break, but she seemed to be finding her level in her last couple games in which she averaged 15.5 PPG, 5.0 RPG, 1.5 APG, 0.5 3PG and 0.5 SPG in 20.5 MPG. The Storm coaching staff has now had the All-Star Break to strategize as to the best way to utilize Charles to best help the team, and it wouldn’t be surprising if she earns a larger role moving forward. Interestingly, incumbent center Ezi Magbegor turned in consecutive double-doubles in those last two games, while superstar Breanna Stewart led the frontline in scoring as always. The Storm now have one of the most talented group of bigs in the league, and while that might cap individual upside in a given game, it appears that all three may be able to post fantasy-worthy lines on a nightly basis.

Best bet: Over 161.5 points. The Storm have combined with their opponents to score 162 or more points in four of their last five games, including the last three in a row. With Charles getting settled in, they have a dominant frontline and a strong offense. The Wings have played in their share of both high- and low- scoring games, but with their team getting healthier they’re more capable of putting points on the board as well. — André Snellings

Fantasy Need to Know: The Aces had an excellent All-Star Game, with A’ja Wilson’s squad winning and Kelsey Plum being named the MVP. The team exits the Break with the entire squad healthy. The Aces have a universally rostered starting five that should be deployed as usual on fantasy squads. One player of interest off their bench is Iliana Rupert (available in 99.3% of leagues), who has scored in double figures in two of her last four games, and is averaging 8.0 PPG, 3.3 RPG, 1.8 3PG, 1.0 APG and 0.5 SPG during that stretch.

The Liberty won eight of their last 14 games, after winning only one of their first eight. The key to their improved play has been Sabrina Ionescu, who has been one of the most productive players in the league during that stretch. During those 14 games, she’s averaged 20.1 PPG, 8.6 RPG, 7.1 APG, 3.1 3PG, 1.1 SPG and 0.4 BPG with two triple-doubles. Center Stefanie Dolson (available in 76.3% of leagues) has also stepped up her play of late. In her last four games, Dolson has averaged 13.5 PPG, 3.0 RPG, 1.0 APG, 0.8 3PG and 0.3 BPG in 23.5 MPG. She’s scored double digits in three of her last four and four of her last six games. — Snellings

Over her last six games, Fowles has averaged 23.6 fantasy points. Along with Aerial Powers, Moriah Jefferson, Kayla McBride and Jessica Shepard, she is a must start for the Lynx. This season, all of them average 22 or more fantasy points per game. Among the Mercury, Diamond DeShields, Brianna Turner, Skylar Diggins-Smith and Diana Taurasi should be deployed in fantasy lineups. Sophie Cunningham, who’s available in 76.2% of leagues, is an excellent streamer. Over the past five games, she has scored 23 or more fantasy points.

Best bet: Lynx -7.5. Going into this game, the Lynx are playing well and have the Mercury’s number so far this season. Minnesota’s defense could be a problem for Phoenix in this game. The Lynx are 4-1 in their last five games against the spread. Minnesota will cover. — Eric Moody

Fantasy Need to Know: After putting together a brilliant first couple months of her WNBA career, Rookie of the Year frontrunner Rhyne Howard seemed to hit a bit of a wall in the last few games before the All-Star Break. In her last six games, she averaged only 10.6 PPG on 33.3 FG% and 62.5 FT%, well down from her season averages. The Break may have given her some time to replenish herself, and if so Howard could be due for some big games in the next few weeks. AD Durr (available in 96.7% of leagues) continues to come off the bench, but even as their teammates have gotten healthier, Durr has continued to produce. They have scored double-digit points in every other game for the last eight contests, and has scored over 20 points in three of their last nine. If the pattern continues, Durr would be due for another double-digit game on Tuesday.

The Sky entered the Break winners of six of their last seven games, and come out of the Break with their lineup as healthy as its been all season. Their entire starting five is almost universally rostered, and should be played as usual. Azura Stevens (available in 48.4% of leagues) has been outstanding off the bench, and in her last two games averaged 14.0 PPG, 6.0 RPG and 1.0 3PG in 23.0 MPG.

Best bet: Sky -9. The Dream stumbled going into break, and the rest may have done them some good coming out. With that said, the Sky are the defending champions, they have the best record in the league, and their last six wins have come by an average of 11.3 PPG. — Snellings

You can count on Delle Donne, Ariel Atkins, Natasha Cloud, Alysha Clark and Myisha Hines-Allen for the Mystics. They are all reliable options for fantasy managers. When Delle Donne is given rest days, Clark’s ceiling is even higher. She is still available in 51% of leagues.

Best bet: Mystics -4. The Sparks defense has been a liability all season, and that trend should continue against the Mystics. Los Angeles is giving up 86 PPG. The Mystics are 9-4 in their road games against the spread. Back Washington. — Moody