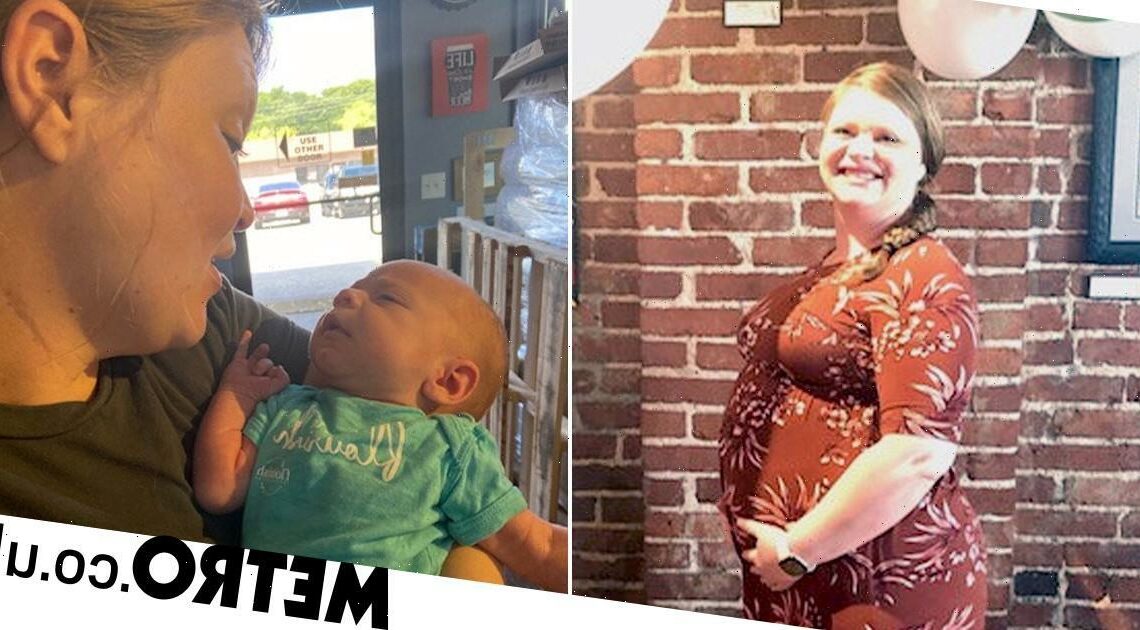 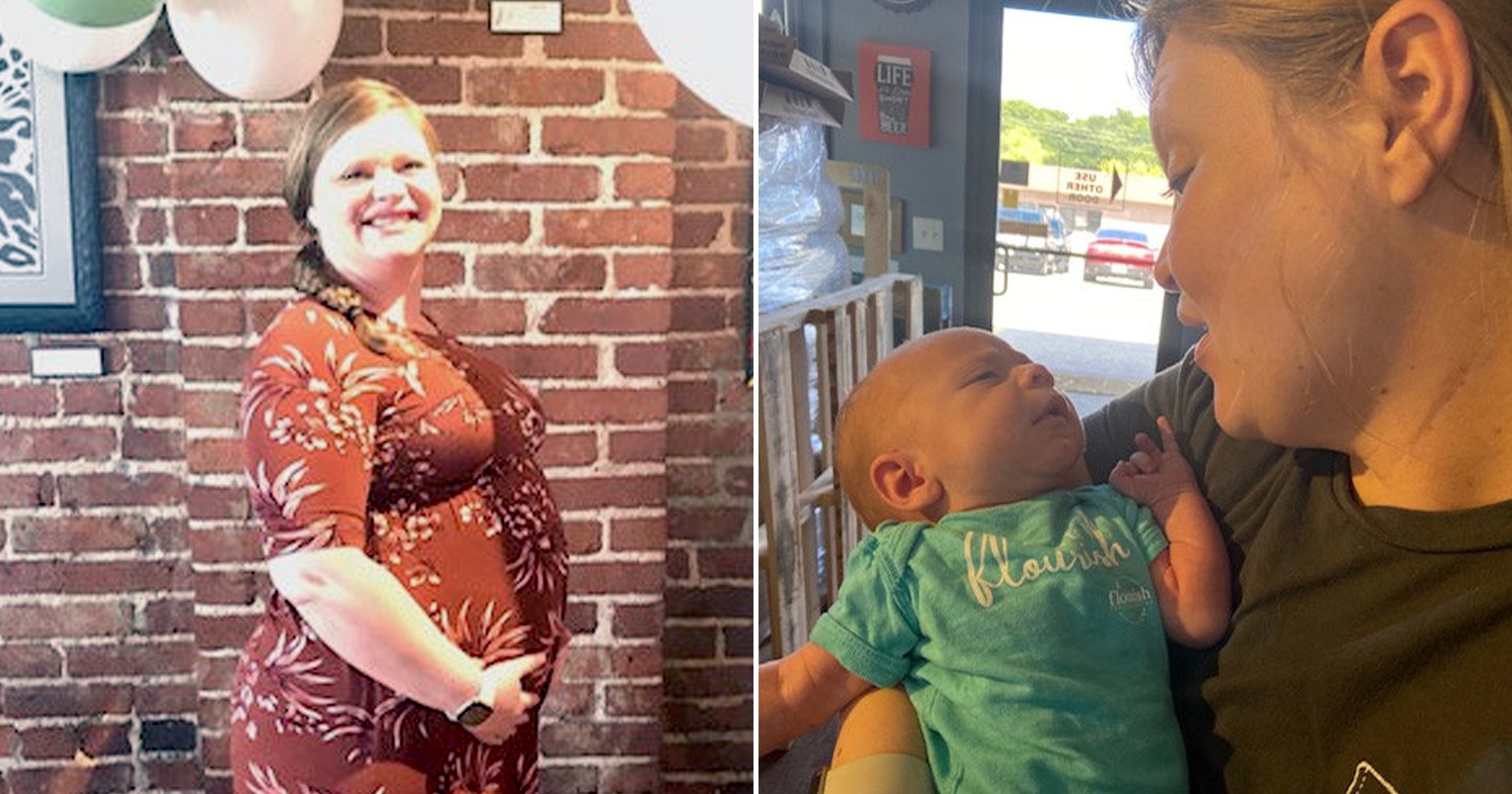 A woman who decided to become a single mother has made peace with the fact that the biological father won’t take on any of the parental or financial responsibilities.

Lindsay Bryan, 36, made the life-changing decision to take on parenthood alone after a series of bad relationships.

She had the realisation that she shouldn’t have to wait for the right man to start a family.

The accountant from Missouri, USA, told her friend about her decision, and he then offered to be her donor.

Together they agreed to have sex to conceive the child naturally, but that his name would not appear on the birth certificate or elsewhere.

Lindsay now has son Jack, who is 12 weeks old, and is thrilled with her unconventional route to motherhood.

She says: ‘I can’t imagine my life without Jack.

‘I’m very happy that I pushed through the fears of what other people would say or think.’

Lindsay always wanted to be a mother but believes her focus on her career slowed down her love life.

She adds: ‘Being so career-focussed through the years, I just had a bad line of relationships.

‘I ended up with two guys who cheated on me and one guy just wanted to hang out all day playing video games.

‘I opened myself up to the idea of doing it on my own. I have a good job, a stable home and a good family support system.’

After experiencing the loss of her mother Jan from lung disease in 2016, her desire to become a mother intensified.

‘It made me realize that life is short and you can’t wait around and hope that things will happen because you are not promised tomorrow,’ she says.

‘I started traveling by myself a lot more, I went to nice dinners by myself. I stopped letting being by myself hold me back from doing things.’

Then doing quarantine alone in the pandemic made her realise she had the space in her life for a child.

‘My life was on pause and I took a look around and thought: “I’d like to have a child”.

‘I had travelled the world and experienced a good career and I was ready to dedicate my life to raising a child.’

Lindsay had visited a sperm back but not confirmed the process when her friend offered to help.

‘We were having a beer together one day and I mentioned that this was something on my mind,’ Lindsay adds.

‘I never asked him but he said that he thought it would be really cool to be able to give me something that I really wanted.

‘At first I didn’t take him seriously but a month later, I said: “Were you actually serious about that?”‘

He said that he was, so they established rules for the arrangement.

‘We had an agreement from the beginning that I wouldn’t list him on the birth certificate,’ says Lindsay.

‘I wasn’t trying to get money out of him or get him to be a coparent.’

After sleeping together just once, Lindsay fell pregnant in October 2020.

She was so shocked to conceive so easily that at first she feared she had Covid.

Lindsay says: ‘It was the first attempt and I wasn’t expecting that I’d be able to get pregnant.

‘I went to the doctor thinking I had Covid because I was feeling so awful and tired.

‘It caught me off guard that the first time of trying it, it worked. It was meant to happen.

‘My due date was my mum and dad’s wedding anniversary – I feel like this was my mum’s gift to me.’

Then on May 24, 2021, Lindsay gave birth to Jack – the friend and biological father has not met him yet.

She admitted that she does at times feels conflicted over him not wanting to meet the boy.

‘He has not met Jack. I texted him on the day that I was in labour and he checked in and asked how everything was,’ she says.

‘We still chat from time to time.

‘It is a little conflicting for me as part of me would like him to meet him but I know that he’s chosen through our agreement to not be involved.

‘I told him that in my ideal world he could be a male figure in Jack’s life.

‘He is my friend and there’s no reason he can’t be Jack’s friend.’

However, she always worries he might love their son and want custody.

The pair never visited a lawyer or signed a contract setting out custody rights.

‘I do have an underlying fear that he could change his mind and want to be a bigger part of Jack’s life,’ she says.

But overall, Lindsay has no regrets about how she became a mother and wants to share her story as there isn’t much out there for women considering a similar arrangement.

‘A lot of people think you are a man-hater if you do this, and that’s not the case for me,’ she says.

‘To biologically have a child you only have a finite amount of time and I didn’t want to miss out on it just because I haven’t gone through the steps that society says you should take. That just wasn’t how it played out for me.

There are many benefits to her single parent life, which she enjoys.

‘I get to be the decision maker. You already have enough people giving you their opinions on how to parent, I can trust my gut instead of having another person with their own feelings and viewpoints,’ says Lindsay.

‘I don’t have to deal with in-laws. I think I have a stronger bond with my son because these first couple of months, it’s just been the two of us.

‘I also don’t have the expectation of a partner helping me because sometimes you have unmet expectations. All of this responsibility is not a surprise to me.

‘Any help I do get is just a blessing.’