Home » Lifestyle » Women feel they are expected to sext their partners, study finds

Women feel they are expected to sext their partners, study finds

The science of sexting: More than a THIRD of women who send nudes to partners say it’s because they feel it’s expected from them

Women who send nude photos of themselves on their smartphone usually do so because they feel it’s expected of them, a study reveals.

Researchers at University of Nebraska-Lincoln used questionnaires to find out why young US women sent ‘nudes’ to men.

The most common reason, chosen by just over a third of participants, was because they saw it as ‘an obligation or inherent part of being in a romantic relationship’.

They also found women ‘endorsed a plethora of motivations’ for sending nudes, including ‘to feel sexually aroused’ and to gain ‘a sense of power’. 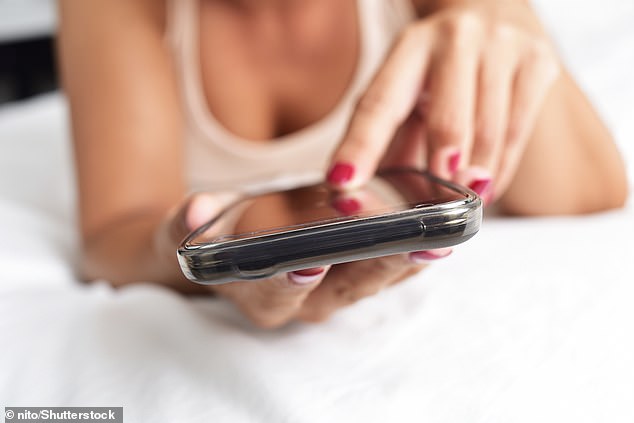 Sexting is a broad term and can include sexually explicit text, photographs, videos or even livestreamed explicit video chat. For this study, the academics focused on nude photos (‘nudes’) sent by women and their motivations for doing so

Sexting is defined as sending or receiving nude or partially-nude pictures or sexually explicit written messages to others via texting, social network sites, apps, or other forms of communication such as email.

Many studies assess sexting only as sending or receiving nude pictures, while some also assess videos and sexually explicit written messages.

The new study was led by researchers at the University of Nebraska-Lincoln’s Department of Psychology.

‘We find that women are not thoughtlessly sending images of their bodies to others, but rather are acutely aware of their motivations.’

As previous studies have discussed, sexting is a broad term and can include sexually explicit text, photographs, videos or even livestreamed explicit video chat.

For this study, the academics focused on nude photos (‘nudes’) sent by women to partners or more causal romantic interests – and their motivations for doing so.

The academics used questionnaires ‘to understand women’s motives for sending nudes’, including more positive reasons, which have been underrepresented in prior studies, they say.

The 207 women participants were all female college students from the US, aged between 19 and 27, who had sent at least one nude in their lifetime.

They were asked: ‘As thoroughly as possible, please describe the reasons that you have sent nudes to men.’ 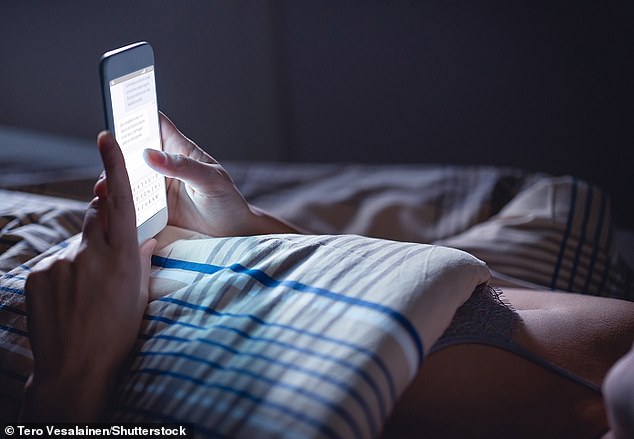 Researchers say: ‘We found that women endorsed a plethora of motivations for sending nudes to men’ (file photo)

Raunchy lyrics from the likes of Drake and Beyoncé encourage sexting in teenage boys, but not teenage girls, a new study shows.

US researchers monitored text messages sent between teenage girls and boys while looking for sexual lyrics in the adolescents’ favourite musical artists.

Teenage boys were likely to send sexts at 18 year olds when they’d been exposed to steamy lyrics around the age of 15, but teenage girls were not, they found.

Nudes were defined as ‘sexual photographs of your body, or of a specific body part, in which you are completely or partially naked’.

They could have been sent to a partner or otherwise, ‘because people send nudes to non-relationship partners’, the team say.

Responses included ‘pressure from friends’, ‘being repeatedly asked for it until you gave in’, ‘to be fun or flirtatious’ and ‘as a sexy present for a someone’.

Overall, the most common motivation by far, chosen by 35.3 per cent of participants, was ‘relationship norm expectation’.

This is when the participant judged sending nudes to as an obligation or inherent part of being in a romantic relationship (e.g., ‘This man is my boyfriend’).

Additionally, a few women were motivated by a sense of power and control.

One participant said: ‘I wanted to exert a sense of power over the men I sent nudes to; I could make them desire me and they would do anything to get a picture.’

In a few instances, women named violence or coercion as the reason they sent nudes (e.g., ‘so he wouldn’t break up with me or become more abusive’).

‘Women have many motivations for sending nudes, spontaneously generating over 20 separate motives,’ the team say.

‘Relationship motives were the most prevalent while violent motives, instrumental motives and drugs or alcohol use rarely (if ever) spontaneously emerged as motivations for sending nudes.’

They conclude by saying other researchers should consider using ‘less stigmatizing language’ when assessing women’s motivations for sending nudes.

The study was published in the journal Computers in Human Behaviour.

If you enjoyed this article…

Those with anxiety and depression more likely to use ‘sextech’

Sexting is when a person takes an indecent image of themselves and sends it to a friend, spouse, boyfriend or girlfriend via their mobile phone.

Sexting is legal if it occurs between consenting adults.

However, if a person is sent sexually explicit material and they are not wanted, the sender could potentially be subject to harassment charges.

Anyone who has or sends indecent images of someone under the age of 18 is breaking the law.

So while the age of consent is 16, the relevant age in relation to indecent images is 18.

‘It is illegal in England to share an image of someone under the age of 18 in a sexual way e.g. naked, topless, in underwear, even if consensual,’ John Synnott at the University of Huddersfield told MailOnline.

It is also illegal for two people under the age of 18 to exchange sexual images and videos.

‘While police would need to record the incident if they became aware of it they would likely treat it as a safeguarding issue if between two individuals under the age of 18 and in the absence of any coercion,’ said Synnott.

However, it is not illegal for two people under the age of 18 to exchange sexual text.

‘Text only content is NOT illegal, provided it is not in breach of existing obscenity laws,’ Katrina Miles, a postgraduate research student at the University of Liverpool, told MailOnline.

‘The term “sext” is a confusing one because it suggests “text” content and a lot of the academic literature talks about text-based content, so I try to avoid it and opt instead for Youth Produced Sexual Imagery.’