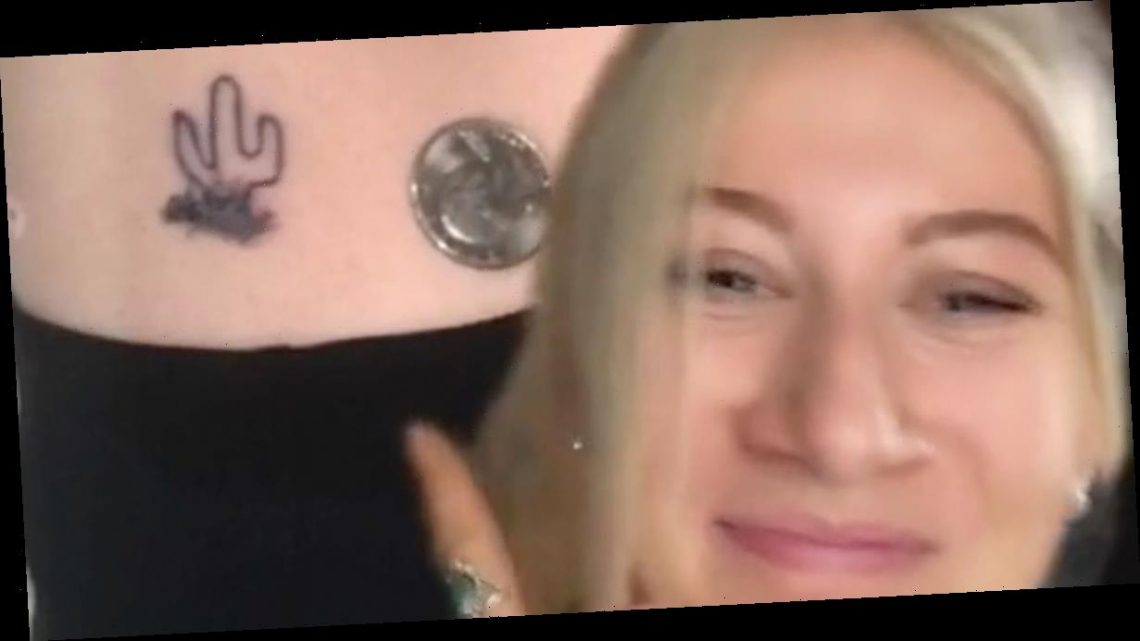 Women with most embarrassing tattoo fails ever share their disastrous inkings

Women with nightmare tattoo results have been sharing how badly it can go wrong in a hilarious series of TikTok videos.

The viral trend shows that even a simple design can go terribly wrong with poor communication or a dodgy artist and many viewers were simultaneously creasing and appalled at the results.

Some of the designs were not even particularly complicated – with one lass left fuming when her design of simple dots was completely messed-up by the tattooist and another horrified when even a "simple outline" went wrong.

Daily Star Online has selected some of the most awkward inkings we could find on TikTok and if we've learned one thing, it is to do lots of research before committing to ink.

A flame tattoo that was quite off the mark when compared to the original sketch left one woman so bitterly disappointed she "cried for days".

In the clip, uploaded by TikTok user @traumaqueen69, she explains how she paid $200 (£153) for the orange and blue tattoo and was left "livid" at the result.

Her reference art is small and simple, with a flame bursting out of a square stencil outline.

For some reason, the finished inking on her arm is gigantic and the fire looks more like a goldfish.

To make matters worse, the square border isn't even square-shaped and is filled in with blue ink that jars with the rest of the colours.

Predictably, the video received nearly 200,000 "likes" and people weighed-in on how bad it really was – and they didn't hold back.

"It looks like Clipart fire on Microsoft Word," joked one.

Spirited Away fan and TikTok user @crumpchy was mortified when she saw what had been scribbled on her skin after submitting a design to an artist.

In her cringe video, she shows the tattoo design she fell in love with showing the key characters from the animated Studio Ghibli classic and shared it with her artist.

Unfortunately, it came out pretty rough, to put it politely.

Right in the centre of the "artwork", main character Chihiro looks like her face has started to melt away.

Trolls were quick to mock @crumpchy for "stealing" another person's custom tattoo design in the first place and said it was karma that it ended up being a bad job.

"As soon as a ‘tattoo artist’ agrees to copy someone else’s work, that’s when you run," blasted one viewer.

Someone else wrote: "I'm an artist and if someone stole my design and it turned out like this I wouldn't even be mad anymore because the universe punished you for me."

Hitting back, the Tiktok user said she was only 19 at the time and didn't know it was considered wrong.

Luckily, she has since changed tattoo parlour and hasn't had a repeat of the awful experience.

Cactus gets a bush

A tattoo that a child could have drawn somehow ended in catastrophe for this unfortunate woman who wanted a cute cactus just above her ankle.

TikTok user @sydneycacy says that her dream design was a simple outline, barely a squiggle of ink, to show the classic cactus shape.

Sadly, the end result is plain ugly and consists of a weird bushy blur with a triffid sprouting out of the middle.

Poor Sydney claimed the tattooist was dodgy and in a "basement" and she was "heartbroken" by how bad the artwork ended up looking.

She said it was fixed but "still not cute" after attempts to save the wild shrubbery.

More than 135,000 people watched the cringe-inducing clip and several joked about the quality, with one remarking you get a better job in prison.

"I coulda done better than that," said another viewer, posting crying emojis.

Another quipped: "The bush is on point."

Another trendy tattoo that should be simple enough to stencil onto somebody's skin is the constellation trend.

Fans of horoscopes or stargazing have been getting certain constellations as minimalist body art, with the stars linked up with simple lines.

TikTok user @mayamake wanted the Gemini constellation design and shared a picture of a tasteful design a woman had inked on her ribcage.

Unfortunately, it looks like Maya's artist forgot to use a stencil or maybe wasn't using it as a reference at the time, or had been drawing blindfolded.

The embarrassing design, etched permanently on her wrist, doesn't look remotely like any known constellation in the galaxy.

Maya says she is laughing more than crying, but looking forward to getting it fixed.

The video was "liked" more than 22,000 times and many people told her it wasn't the worst they'd seen and at least it was quite small.

"Now just go to a pro who will rework that abomination," said a sympathetic-sounding viewer.

Fortunately, none of the tattoo fans ever had to suffer a repeat of the same disaster again – once is bad enough.