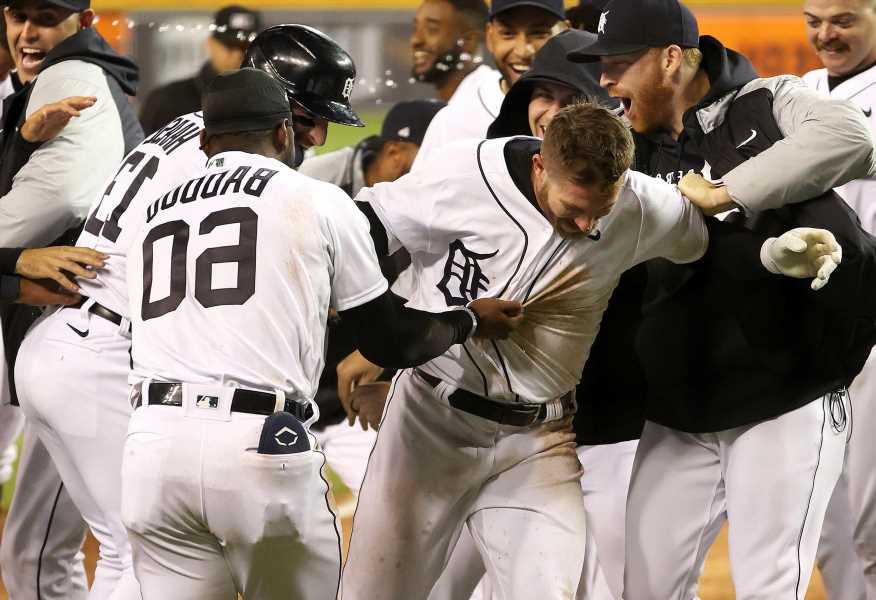 Yankees blow lead in 10th in crushing loss to Tigers

Inconsistent Yankees starter getting another shot

Why Yankees and Gerrit Cole are bet-against in this spot

Why Aroldis Chapman didn’t get the save in Yankees’ win

DETROIT — The Yankees were ready to steal a victory from the Tigers on Friday night — and then struggling lefty Justin Wilson turned victory into defeat.

Wilson allowed a two-out, two-run homer to Robbie Grossman in the bottom of the 10th inning and the Yankees lost, 3-2, at Comerica Park.

After the Yankees scored a run in the top of the 10th, Wilson was one strike away from a victory before his disastrous season continued. After a close pitch was called a ball, Wilson, who had allowed seven earned runs in over 7 ²/₃ innings in his previous eight outings, got Niko Goodrum to fly to right and pinch-hitter Victor Reyes to ground out before Grossman took him deep on a full count.

The Yankees’ offense shares plenty of blame for the loss.

After leaving runners on the corners in the top of the ninth, the Yankees had Aaron Judge on third and Rougned Odor up with one out in the 10th when Detroit catcher Jake Rogers let a Bryan Garcia pitch get by him for a passed ball that allowed Judge — who started the inning on second — to score.

That was all the Yankees got, and then they turned the ball over to Wilson in the bottom of the inning.

In the top of the ninth, Gary Sanchez, pinch-hitting for Kyle Higashioka, popped out against left-hander Gregory Soto. Aaron Boone then went to Miguel Andujar to hit for Brett Gardner. Andujar singled to right and was replaced by pinch-runner Tyler Wade. Wade moved to second on a wild pitch and advanced to third on a second wild pitch by Soto on a 3-0 pitch to DJ LeMahieu.

But with runners on the corners and one out, Giancarlo Stanton struck out for the fourth time on the night. That brought up Judge, who also whiffed to keep the game tied.

Aroldis Chapman walked Jonathan Schoop in the bottom of the ninth. Akil Baddoo, pinch-running for Schoop, got caught off first when Chapman bounced a pitch and Sanchez threw him out at first. Chapman recovered to strike out Nomar Mazara and get Eric Haase to fly to left.

That followed a fine outing from Gerrit Cole, who gave up one run in six innings.

Cole pitched out of trouble in the bottom of the first. After retiring the first two batters, he allowed a double to Jeimer Candelario and walked Miguel Cabrera. But he recovered and got Schoop to ground to short.

The Tigers broke through against Cole in the third with three straight one-out singles. Grossman started the rally with a base hit up the middle and Harold Castro followed with a single to right-center. Candelario’s second hit of the game drove in Grossman and sent Castro to third with one out, but Cabrera hit into an inning-ending double play to keep it 1-0.

The Yankees couldn’t get much going against right-hander Casey Mize.

A day after being shut down by Toronto’s Alek Manoah — the 11th overall pick in the 2019 draft — they were stymied by the first overall pick from 2018.

Mize allowed just two hits over the first four innings before Odor sent an 0-2 pitch into the seats in right to tie the game at 1-1 in the fifth.

Cole gave up another hit to Candelario to start the bottom of the sixth. Schoop grounded into a force-out, advanced to second on a wild pitch and moved to third on a passed ball, but he was stranded there when Cole fanned Mazara.

Cole left after six innings and 103 pitches. He gave up one run and struck out five.

Wandy Peralta tossed a scoreless seventh and Chad Green entered in the eighth.

Mysterious front door to 'village within a village' on the market