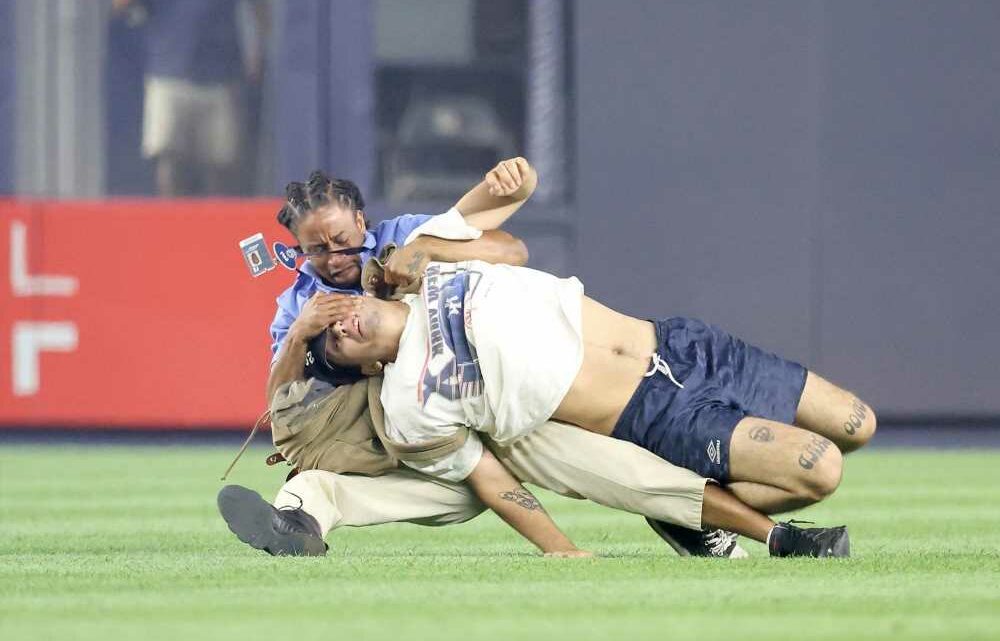 Gunplay breaks out on street near Yankees game, NYPD says

The Bronx Bombers fan who sprinted onto the field at Yankee Stadium only to get absolutely demolished by security has been criminally charged for the stunt, authorities said Wednesday.

Leonardo Lertora-Leiva, 25, was hit with a desk-appearance ticket for criminal trespass and a violation of local law, according to the NYPD.

The Cos Cob, Conn. man dashed onto the field during the sixth inning of the Yankees’ Tuesday night tilt against the Philadelphia Phillies — but was quickly taken down by a stadium security worker with an NFL-worthy tackle.

He posted a screenshot of The Post’s coverage of the stunt, centered on a photo of the security guard chasing him and captioned with the word “F–K” in all-caps.

“Off with the bag,” the shot was further captioned, along with two laughing emojis.

Earlier in his Story, Lertora-Leiva posted a photo of the field shot from the left-center field stands.

The Yankees didn’t immediately respond to an inquiry about what punishment, if any, he faces.

The incident was just the latest in and around Yankee Stadium in recent days.

During Saturday night’s game against the Boston Red Sox, a fan threw a ball from the stands that struck Red Sox left fielder Alex Verdugo in the back, earning a lifetime ban from all MLB stadiums.

That same night, Catherine Varitek, the wife of former longtime Red Sox catcher and current assistant coach Jason Varitek, said a Yankees fan spat on her 9-year-daughter as they walked to their car outside the ballpark.

The just-concluded NBA playoffs also saw multiple instances of badly behaved fans, as people flocked back to sporting events en masse following more than a year of being largely cooped-up amid the COVID-19 pandemic.

During the Knicks series against the Atlanta Hawks, a fan was indefinitely banned from Madison Square Garden after spitting on Hawks point guard Trae Young.

A Boston Celtics fan caught on video hurling a water bottle at Nets star Kyrie Irving after a game in Beantown, grazing the point guard’s head, was hit with criminal charges.

And a Philadelphia 76ers fan had his season tickets revoked after dumping a bucket of popcorn on the head of Washington Wizards point guard Russell Westbrook during the series between those teams.