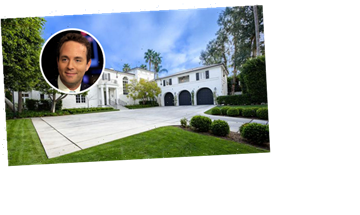 The .58-acre property’s current asking price is $24 million, a not unheard-of number in the neighborhood but several ticks above the $19.7 million Rascoff paid to acquire the house, back in early 2016. The completely flat estate includes a 12,700 sq. ft. “California traditional” house with three full floors of living space, six bedrooms and nine baths.

It’s not entirely clear what alterations Rascoff and wife Nanci have made during their four years of ownership, but the portly manse was originally built in 1991 as a Mediterranean-style beast. Around 2015, shortly before being sold to the Rascoffs, the house underwent a major remodel and stylistic revamp spearheaded by prolific architects Steve Giannetti and Ken Ungar.

Gated and camera-watched for security, the house is additionally surrounded by a towering hedgerow, imbuing the estate with park-like serenity. A driveway leads past formal lawns and lush landscaping to the front motorcourt and attached three-car garage, which is set catty-corner to the front door.

Inside, the house is done up with ebony-stained oak floors and contrasting white paint on the walls and wainscoting. There’s a baronial dining room with a fireplace and direct access to the living and family rooms, both of them equipped with fireplaces. The chef’s kitchen is done up with Calacatta marble and offers high-end stainless appliances, and there’s a breakfast bar or separate casual dining areas for meals on the go.

Other home amenities include a wet bar outside the wood-paneled study, a home theater with stadium-style seating, a basement wine cellar and separate two-bedroom wing for overnight guests and a cranky mother-in-law or two. The upstairs master is currently done up with floral-print carpets and window drapes, and additionally dual bathroom suites with dual walk-in closets and dual fitness studios, allowing each partner can get their workout on in peace.

The home’s grounds are landscaped in an elegantly simple manner, with the backyard devoted almost entirely to an expansive magic carpet of emerald-green grass. Tucked into the far rear of the yard is an dark-bottom swimming pool with inset spa, and back by the house is an outdoor kitchen with built-in BBQ and patio for alfresco dining.

It’s not clear where the L.A.-bred tech entrepreneur is moving, but The Real Deal noted the current $24 million listing price is over $7 million more than the home’s $16.7 million Zestimate, so perhaps Rascoff is merely testing the waters with an exuberantly high number.

Of course, Brentwood Park has long been one of the most desirable neighborhoods in L.A. — the family-friendly area sports its own private security patrols and row upon row of exceptionally large gated estates. Some of Rascoff’s nearest neighbors include “South Park” creator Trey Parker and Mosaic talent manager Jimmy Miller, who recently bought the longtime home of Jerry Bruckheimer.

Josh and Matt Altman of the Altman Brothers team at Douglas Elliman hold the listing.