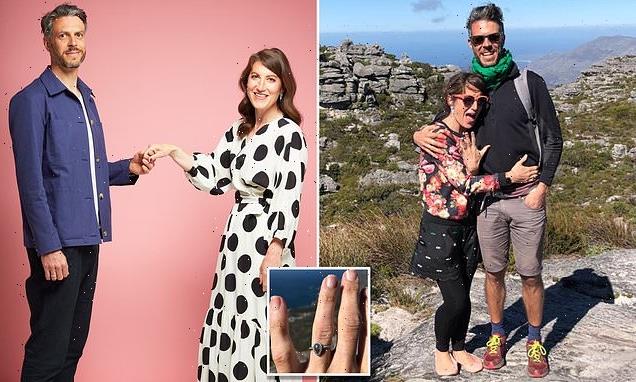 Zoe Folbigg reveals why a second proposal is twice as sweet

They’d been married ten years and had two children when he popped the question again. Here, novelist Zoe Folbigg reveals: Why a second proposal is twice as sweet

A dream trip to South Africa was our last big holiday before the pandemic — and my husband, Mark, and our sons, Felix, then nine, and Max, seven, had reached the top of Table Mountain in Cape Town after a strenuous two-hour hike.

In one direction you could see Robben Island; in another, Lion’s Head mountain. The city shimmered below us. I stopped to rummage in my bag — it was Easter weekend and I’d packed Creme Eggs, a family favourite, as a surprise reward for our travails to the top. Little did I know Mark had planned a surprise of his own.

‘Er, Dad what are you doing?’ Felix asked, as Mark dropped to one knee.

‘You look funny,’ said Max, with a puzzled smile on his little face. 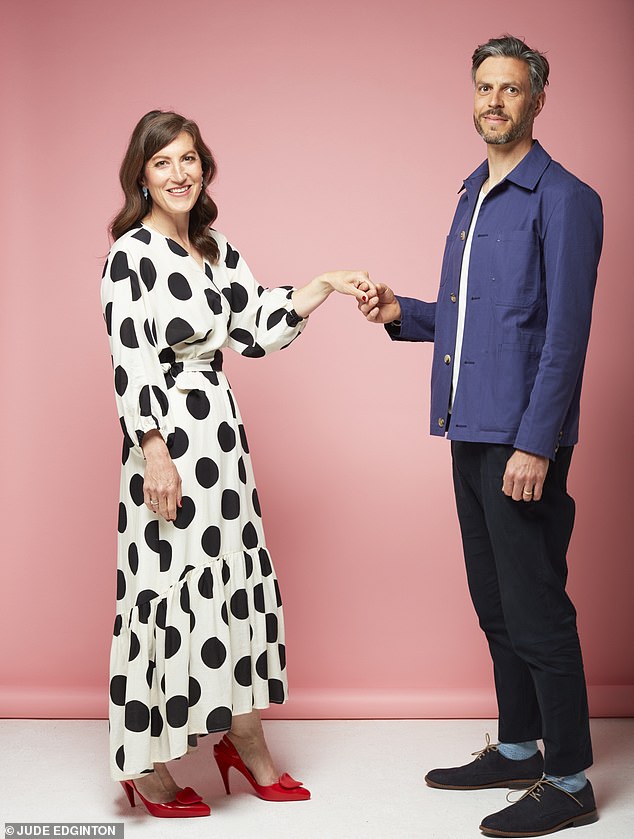 Zoe Folbigg who lives in Hitchin with husband Mark (pictured) and their sons, recalls marking their tenth wedding anniversary with a second proposal

Mark had gone down on one knee and was proffering a small black jewellery box.

‘What?’ I laughed. I thought perhaps the altitude was messing with my mind.

It was our tenth wedding anniversary — and we had booked the holiday to coincide with it. Starting off on safari in Madikwe Game Reserve, then flying to Cape Town to enjoy all its gems: the penguins of Boulders Beach, an eye-opening trip around Robben Island and visiting the Cape Of Good Hope, where two oceans collide.

Table Mountain was the final thing on our South Africa bucket list, so when the shroud of cloud that often covers it had evaporated that morning, Mark said: ‘Let’s do it! Something memorable to mark the day.’

We’d parked our rental car at the bottom and, loaded with water, wound up the narrow path over huge stepping-stones, chatting in the spring sunshine.

While our boys were on the lookout for the wildlife, I contemplated ten years of married life and our dating years before that.

It had been a long journey to a first date for me and Mark. I had loved him from afar, a tall, dark stranger on the train on our daily commute. From the minute he started taking the 8.21am from Hitchin, Herts, to King’s Cross, in July 2003, it had taken me over a year to pluck up the courage to hand ‘Train Man’ a note, asking him to go for a drink with me.

It was the most excruciating moment of my life, standing on a packed carriage, somewhere between Finsbury Park and King’s Cross, and saying ‘Excuse me please, can I give you this’, as the train pulled into the station, and our fellow commuters looked on. 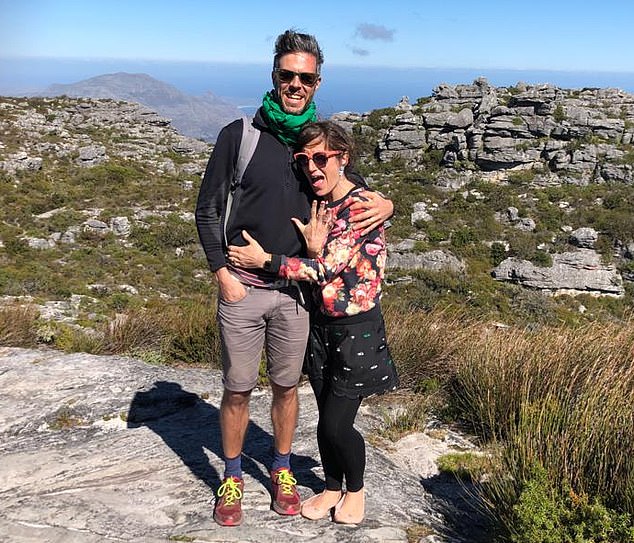 Mark contacted Zoe to go for a drink in 2005, after separating from the girlfriend he had when they first met on their daily commute. Pictured: Zoe and Mark on Table Mountain

Worse still was the rejection that was to come in response to my note. A polite email later that day saying thank you, but he had a girlfriend. This was followed by awkward months of me blushing on the train, embarrassed about my moment of madness. Of course he has a girlfriend, he was too lovely, his face too kind to be available. Guys like him always have a someone special.

Writing off any hope of Train Man, I continued my life of first dates that never led to a second.

But in January 2005, Mark, as I now knew he was called, emailed me again to say he’d been single for a few months, and did I still fancy that drink?

We went out the next night, and it was the best first date — and the last first date — I’ve been on. That had been the long journey to us getting together, and now, as Mark crouched down on one knee, among the red orchids and white confetti bushes that dotted the pathways, I felt utterly blessed.

Not just that our worlds had collided on that commuter train, but for the two boys who were now darting in and out of the bushes, howling with laughter about what was going on. 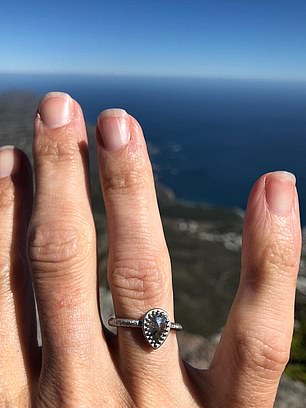 ‘But you already proposed,’ I said, stunned.

I had thought his first proposal, three years after our first date, was lovely, if a little nervous. We were backpacking as part of a year-long round-the-world trip, and what I didn’t know was that Mark had been trying to propose in all of these romantic locations, but kept losing his nerve.

He also worried that he hadn’t bought a ring (there weren’t many opportunities on the backpacking trail), and he had wanted to make a courtesy call home to my parents and run it past them — but we were always together.

Eventually, Mark proposed on a sleeper train in the middle of Australia, and as the sun had set over the red centre, he knew the opportunity was too good to miss. He didn’t have a ring and there had been no space to get down on one knee in our tiny train compartment, but I was elated. Train Man had proposed to me . . . on a train. I couldn’t have been happier. We married six months later.

Ten years after that, on top of Table Mountain, I said yes again. And Mark slipped the ring — a grey, pear-shaped diamond set on a platinum band — onto the ring finger of my right hand. 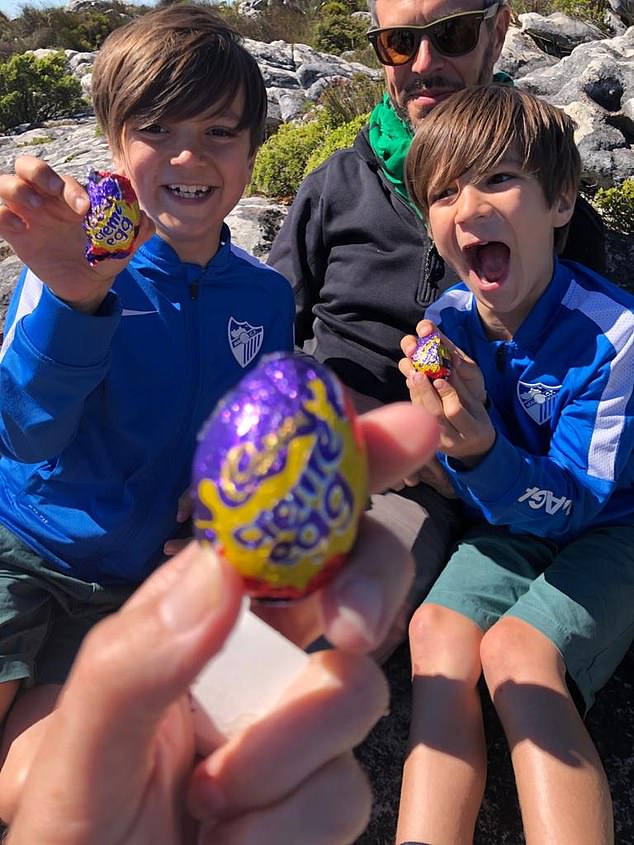 Zoe said they had rarely paused to take stock of how far they’ve come, before their anniversary trip. Pictured: The family on Table Mountain

Stopping to eat our Crème Eggs and take photos, I looked at my original engagement ring on my left hand — I had picked out a brown diamond in a jeweller in Brighton after we got home from backpacking — and the new ring on my right, shimmering in the sunshine. I thought about the ten interim years of married life: moving house, finding our feet, the exhaustion of having two children in two years, struggling to get my debut novel published, then write another three books.

We get so bogged down in the daily grind — especially this year, of all years, with the lack of socialising, parties and holidays that usually punctuate it — that we rarely pause to take stock of how far we’ve come.

If we’ve found a deep love, it’s easy to let that astonishing piece of luck pass us by without acknowledging it. Luckier still if it’s grown and strengthened, as ours has.

Of course, it’s impossible to sustain romance in a relationship all the time. Life gets in the way, especially in lockdown. Mark is a senior software manager for Just Eat and is on Zoom calls most of the day. I’ve found it hard to cope with a house full while I’m writing, and homeschooling was hellish. 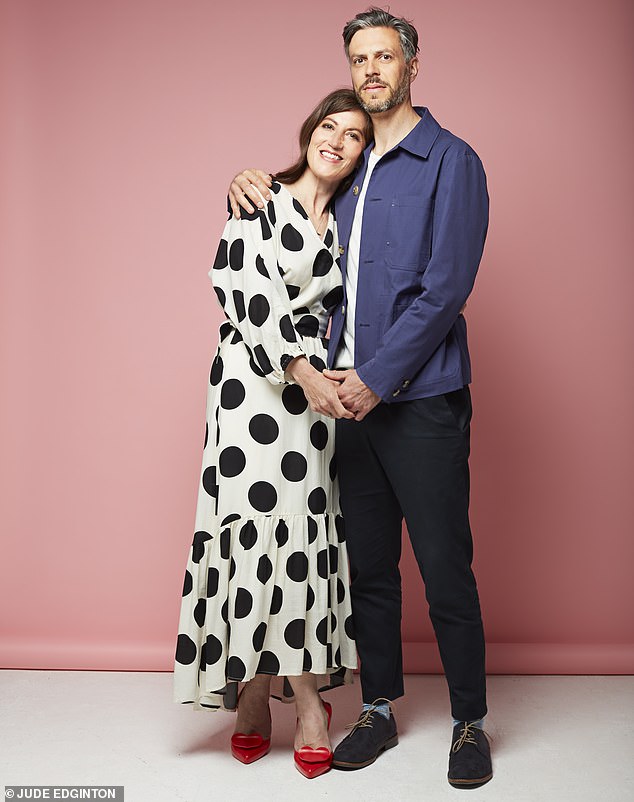 Zoe said ten years may seem a bit early to renew their vows, but she’ll take any excuse for a party after covid. Pictured: Zoe and Mark

Ten years may seem a bit early to renew our vows, but perhaps we’ll do it anyway. What better way to cut through last year’s struggles and show us what we’ve got? How incredibly lucky we are. Like the sun finally coming out after a downpour.

We’re not as broke as we were the first time around either. And frankly, I’ll take any excuse for a party after Covid. We got married the first time in a tythe barn near our home in Hitchin, and I wore a gown with capped Chantilly lace sleeves and a grey silk sash — but I love every wedding dress I see in the window of my local bridal shop, and I’d love to try some on.

Meanwhile, we’re saving up for our next adventure. I’m voting for Mexico, Mark covets Costa Rica. Daydreaming and hope got me this far. But if we can’t go abroad for a while, that’s fine. A UK holiday can be just as life-affirming and romantic as long-haul travel — so long as we go by train.