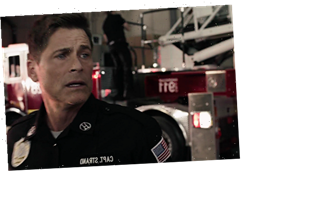 The first season of “9-1-1: Lone Star” comes to a shocking conclusion with a two-hour finale Monday night. Like, literally shocking if TheWrap’s exclusive sneak peek from the second hour is any indication.

In the clip from Episode 110, titled “Austin, We Have a Problem,” which you can view via the video above, you’ll see Owen (Rob Lowe) informed that Michelle (Liv Tyler) hasn’t checked in with the 126 this morning. But before he can figure out where she might be and what she might be up to, a power surge suddenly hits the station and makes everything that runs on electricity go haywire.

Naturally, the sequence is set to Oingo Boingo’s “Weird Science” because, well, it’s a super weird science-y situation. Now, we have no idea what this actually means, but we know it’s not good!

Owen and the 126 crew race to a gender reveal party gone horribly wrong, and a father/son trapped in a cave during a spelunking excursion. Meanwhile, Owen helps T.K. reconcile the past to help his future, Judd and Grace aid Judd’s aging father (guest star Barry Corbin) and Michelle learns the full truth about her missing sister, Iris.

You can check back in with TheWrap after the “Lone Star” finale to read our interview with Rubinstein, who plays T.K., about his character’s fate and where things stand for a second season of the “9-1-1” spinoff series.

'Young Sheldon,' 'The Simpsons' and 22 Other Spinoff Series Now on the Air (Photos)

Fox’s Rob Lowe-led “9-1-1” spinoff “Lone Star” premieres Sunday, Jan. 19, the latest in a long line of TV shows that are offshoots of other comedies or dramas. TheWrap has rounded up 24 spinoffs still on the air, including Dick Wolf’s “Chicago” franchise, “Big Bang Theory’s” little brother “Young Sheldon” and “The Simpsons” (You didn’t forget Fox’s long-running animated series is actually a spinoff, did you?) Click through our gallery to see them all.