Home » TV and Movies » A Million Little Things Recap: Second Chances All Around — Plus, Is Eve OK? 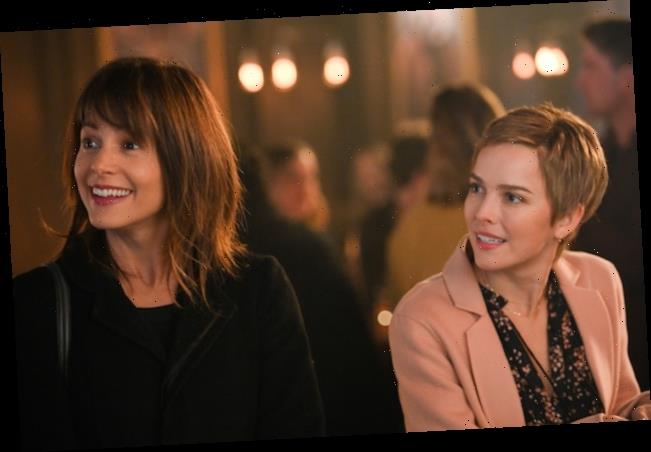 A Million Little Things Recap: Second Chances All Around — Plus, Is Eve OK?

For a family drama, A Million Little Things has quite a few stashes of unaccounted-for drugs, doesn’t it?

Another bit of illicit material shows up in Thursday’s episode, when Eddie finds a vial of cocaine in his home recording studio and immediately assumes that his visiting sister Lindsay isn’t as sober as she claims to be. On a related topic: What about the ownership of those loose joints Gary found in the bottom of Sophie’s sleeping bag a few weeks back? It seems like we get an answer, albeit a fleeting and context-free one, in this episode.

Unrelated but awesome: Katherine does probably the best thing she’s done since we met her. Read on for the highlights of “Change of Plans.”

HI, LINDSAY! OR HIGH LINDSAY? | When Katherine is called into work last-minute to help woo a potential client, Gary volunteers to take Theo to play laser tag with a friend. Eddie welcomes the help: He’s going to stay at home to greet his sister, Lindsay, when she arrives for a visit. Eddie and Katherine agreed that they don’t want Theo around when his aunt shows up: Though she says she’s now sober, Lindsay was as big of an alcoholic mess as her brother was back in the day, and “I can’t let her mess up our life again,” Katherine asserts. And seeing as how Lindsay apparently vomited into the flower girl’s basket on Eddie and Katherine’s wedding day, we’re assuming she means that figuratively and literally.

When Eddie eventually greets his sis solo, she’s warm and loving, and she totally gets why he wouldn’t want his kid anywhere near her. Well, the old her. (She’s also played by The Following‘s Sprague Grayden.) She says she’s on the wagon now, and she seems to have her stuff together. She calls him “Mr. Ed.” They hug. They talk about how she was always his biggest supporter. It’s cute… until he’s making up the recording studio for her to stay in, and he finds some coke on the ground. Even though Lindsay maintains that she’s clean and the drugs aren’t hers, Eddie kicks her out.

The minute Lindsay denies ownership of the blow, you just know it’s Dakota’s. And sure enough, when she comes looking for the capo she allegedly lost there, Eddie realizes what’s up. He reassures her that she doesn’t need the drugs to be great, but she says she’s been using the entire time they’ve been working together, and she’s not going to stop. Then she leaves.

KATHERINE, LGBTQ ALLY | We’ll put a pin in that for a moment and hop over to Katherine’s firm, where she makes a great impression on the potential client. But afterwards, Katherine confronts her bosses and wonders if she was only called in because she was a woman, and they wanted the optics to be favorable to the future client, who is female. They strongly disagree, calling Katherine one of the best litigators they have. But she counters by asking, if she’s so amazing, why they took a big case away from her and her assistant, Parker, a little while back? The bosses look uncomfortable, but then admit that the problem there wasn’t Katherine, it was Parker. The client on that case didn’t like that Parker is gay. Parker then chooses that moment to come in and be his usual, if somewhat slightly extra, self.

The next thing we know, Katherine and Parker are bringing cardboard boxes of her stuff into the foyer of her home. Off Eddie’s questioning look, she triumphantly announces that she told her bosses to shove it, then she quit, when they admitted how they’d coddled their homophobic client. A tearful Parker hugs her and thanks her for standing up for him in a way no one ever has. But after he leaves, reality sets in a bit: What’s she going to do now?

That’s when Eddie pipes up with everything that’s happened to him that day, though he doesn’t agree with Katherine’s assertion that he has to stop working with Dakota. “No, Dakota has a problem, but I can handle it,” he promises, outlining a plan where they’ll get through the album, he’ll get the young artist help and then they’ll get Katherine “the job you deserve.” Katherine… does not look convinced.

TAG, YOU’RE IT! | Gary is hitting on the young front-desk attendant at the laser-tag place when a woman behind him in line gets impatient and asks him to move it along. Turns out, the woman is the mother of Theo’s friend, Liam, so she and Gary are thrown into close proximity for the rest of the afternoon. The boys wind up getting into a little fight; Gary is way outta his depth in terms of helping them make amends, but the mom — whose name we later learn is Darcy (and who is played by Supergirl‘s Floriana Lima) — gently leads the kids to resolution, then the four of them play on the same team.

Afterward, Gary learns that Darcy is one of Katherine’s good mom friends, she served in Iraq and she is now divorced from Liam’s father. On the whole, they’re getting along a lot better than they did at first. And when she slips him a phone number, he assumes it’s hers — but instead she surprises him by revealing that she played wingman and got him the contact info for the way-too-young-for-him desk clerk, instead.

DELILAH’S DALLIANCE | Maggie and Delilah decide to go out for the evening. And when a cute guy (played by Suburgatory‘s Parker Young) keeps looking over from the bar, D assumes he’s into Maggie. Because she’s lit on a few tequila shots and some wine (side note: HORRIBLE COMBINATION, LADY), she waltzes over and invites him to sit with them. But Maggie soon realizes that the dude is into her friend, so she urges her to go for it. And go for it Delilah does: Miles winds up going home with her.

Meanwhile, tipsy Maggie gets a call from Oxford: Someone has had to drop out of the program she wanted to go to, and does she want to fill the spot? “I’m in,” she says, right there and then. Also? Earlier in the evening, Maggie mentions that the marijuana Gary found belonged to Sophie, so I guess that’s our answer to that one?

A CLOSE CALL | Rome and Regina haven’t really heard from Eve since she and Derek left the restaurant, and they’re worried. So they track her via the phone they got her and wind up at a hotel. Thanks to an understanding clerk at the front desk, they make their way to Derek’s room. But it sounds like things are going OK, and the Howards are debating what to do next — Rome wants to go in, Regina thinks they should go — when Eve and Derek exit the room. Derek is immediately suspicious, but Eve quickly defuses the situation, inviting the Howards inside so they can all get to know each other. However, when she refers to Regina as “Wendy” — aka Regina’s contact at the women’s shelter — it’s clear that it’s a distress signal.

Pretty soon, they’re down in the hotel’s business center, where the in-house notary is officiating the paperwork that will sign away Derek’s parental rights. He’s a little unsure for a moment, but Eve affirms the choice, saying that she’ll go back to Philadelphia with him and they’ll have a great life together. It almost goes sideways when the notary refers to Regina by her actual name (because she and Rome served as witnesses), but Gina plays it off that Wendy is her middle name, the one she goes by. Derek seems to accept this, and they say their goodbyes. But Regina makes sure to say (in a very pointed fashion) that they have to stop by Cabot’s ice cream shop before they go, and Eve seems to understand what she means.

Later, Regina is on the phone with Wendy: Eve is safely at the women’s safehouse, and the order of protection is all set up. Just then, Derek busts into the restaurant, yelling for his girlfriend. He makes his way into the kitchen, where Rome informs him that they know who his boss is, and they’ll tell him everything if Derek doesn’t leave Eve alone. It’s a very tense confrontation, and Rome and Derek almost get into it physically, but eventually Derek backs down. “It doesn’t matter,” he scoffs on his way out. “She’s just going to end up coming back to me, anyway.”

UNWANTED BLAST FROM THE PAST? | Back at Eddie’s, before Lindsay leaves (wait, I thought she was staying a while?), she asks him about the lake house their family used to visit. “Did you ever think about why we stopped going?” she wonders. He mentions that someone died in an accident 20-ish years ago, and he just assumed their parents didn’t want to return after that. She seems to have more to say but doesn’t say it, leaving Eddie to ponder her meaning after she’s left.

When is Italy vs England rugby rescheduled date and why was Six Nations match postponed? – The Sun
Recent Posts