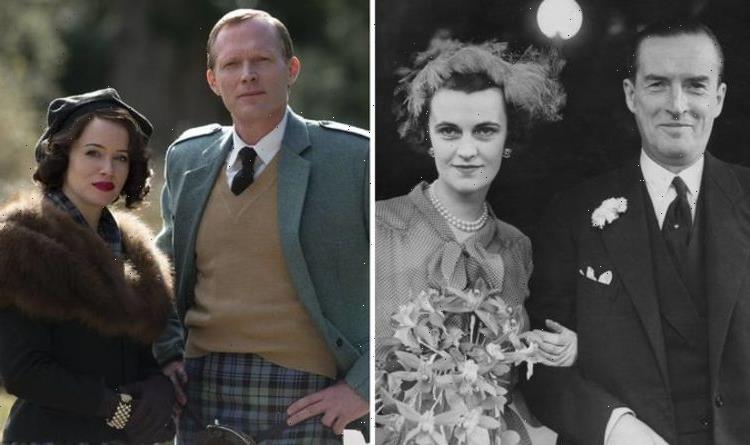 A Very British Scandal premiered on Boxing Day on BBC One and has gone down a storm with viewers. The series depicts the divorce of the Duke and Duchess of Argyll in the 1960s and the drama that revolved around their split. Express.co.uk has everything you need to know about the stars of the show as well as the royal couple in real life.

Duchess of Argyll in A Very British Scandal

In the BBC One mini-series, the role of the Duchess of Argyll is portrayed by actress Claire Foy.

Fans will probably know her best for playing Queen Elizabeth in the first two seasons of The Crown on Netflix.

She was also Anne Boleyn in the period drama Wolf Hall, Lady Persephone Towyn in Upstairs Downstairs and Charlotte in White Heat.

Foy took on a very different role when she starred in The Girl in the Spider’s Web in 2018.

Duchess of Argyll in real life

Margaret, who was born Ethel Margaret Whigham, was the only daughter of Helen Mann Hannay and George Hay Whigham, a Scottish millionaire who headed a large tech company in America.

The well-known socialite went on to marry American businessman Charles Sweeny after a failed engagement to the 7th Earl of Warwick.

They went on to divorce in 1947 after having three children together, a daughter who was stillborn at eight months, daughter Frances Helen and son Brian Charles.

Four years later and Margaret went on to marry the Duke of Argyll.

Duke of Argyll in A Very British Scandal

The duke in the three-part BBC drama is portrayed by actor Paul Bettany.

In the earlier days of his career, Bettany had been in The Suicide Club, A Beautiful Mind, Every Woman Knows A Secret and The Da Vinci Code.

But in recent years, he is remembered for playing J.A.R.V.I.S and Vision in the Marvel Cinematic Universe films such as Iron Man, The Avengers, Age of Ultron and Captian America.

He also starred in the Disney+ series WandaVision alongside Elizabeth Olsen as Wanda Maximof.

Ian Campbell, better known as the Duke of Argyll, was married four times, three of which ended in divorce.

His first wife was Janet Gladys Aitken who he married in 1927 and had daughter Lady Jeanne Campbell with.

The Duke then married Louise Hollingsworth Morris Vanneck in 1935 and had two sons together, Ian and Lord Colin Ivar Campbell.

In 1951, he went on to tie the knot with Margaret which is the focus of A Very British Scandal.

The same year as their divorce in 1963, the Duke married Mathilda Coster Mortimer but he died in 1973 in a nursing home in Edinburgh.

A Very British Scandal concludes tonight, Tuesday, December 28, at 9pm on BBC One.

The synopsis for this final instalment reads: “Battlelines are drawn as the Duke and Duchess of Argyll enter into a bloody separation, all played out in the white-hot glare of a ravenous press.”

But how will it all play out for the Duke and Duchess by the end of the series?

A Very British Scandal is available to watch on BBC One and BBC iPlayer.

Environmentally minded owners switching to insect diets for their pets