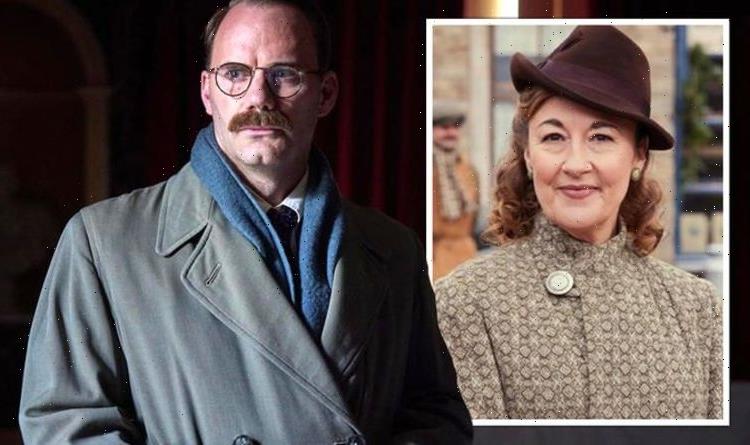 All Creatures Great and Small: Cast on lack of 'villains'

All Creatures Great and Small returns to Channel 5 on Christmas Eve and Skeldale House is decked out for a huge celebration. With James Herriot (played by Nicholas Ralph) and Helen Alderson (Rachel Shenton) having celebrated their engagement, they are torn over where to spend their first Christmas together. Some guest stars will be creating more obstacles for them along the way and here is all you need to know about the cast.

Who is in the ACGAS Christmas special?

Dave Kitson appeared in the second season of the uplifting family drama as a farmer in the Yorkshire Dales.

As one of James’ clients, the dedicated vet will pay him a visit to check up on some of his animals.

He does not always see eye to eye with James, but he will have an important role to play for Helen.

The farmer could end up being the solution to Helen finding her feet at Skeldale.

He also provides some vital information that could save a beloved pet’s life.

Dave is played by James Burrows, a 30-year-old actor best known for his role as Ali Neeson in Coronation Street.

He also had recurring roles in Safe House and Mount Pleasant.

Maggie is one of Tristan’s (Callum Woodhouse) love interests in the series and she has had regular appearances throughout.

On Christmas Eve, Tristan hopes to get lucky as he tries to win the barmaid’s affections once more.

Maggie and Tristan share very similar personality traits, but will they finally get together?

The barmaid is played by Mollie Winnard, a 24-year-old actress who has previously starred as Kayla Clifton in Coronation Street.

She also starred in Love, Lies and Records.

Gerald Hammond is Mrs Hall’s potential love interest in the escapist drama and he made a regular appearance in season two.

Having plucked up the courage to ask the housekeeper out, he hopes she will start to feel the same way.

Mrs Hall has been reluctant to admit she is attracted to Gerald, but hopefully, the Christmas spirit will help her embrace her feelings.

Kind-hearted Gerald is played by Will Thorp, a 44-year-old actor who starred in Scott and Bailey, Law and Order UK and Casualty.

He is perhaps best known for playing Paul Woody Joyner in the medical drama between 2004 and 2005.

She has made herself known as one of the prominent female characters of the second season and shares Siegfried’s sense of humour.

Hopefully, the pair will become even closer thanks to the magic of Christmas.

Diana is played by Dorothy Atkinson, an actress in her mid-50s who was a series regular in Call The Midwife, Harlots and Pennyworth.

She also starred in London’s Burning and Mr Turner.

Also joining James and Helen will be familiar faces Siegfried and Tristan Farnon.

Mrs Hall (Anna Madeley) will continue to consider her feelings for her new friend, Gerald.

Of course, the festive special would not be complete without the eccentric Mrs Pumphrey (Patricia Hodge).

Her beloved Pekingese Tricki Woo will be the centre of attention as he falls ill ahead of Christmas Day.

The All Creatures Great and Small festive special airs on Christmas Eve at 9pm.

'Christmas is a reminder of freedom': What estrangement looks like at Christmas