Home » TV and Movies » American Idol 5th Judge: Sorry Dawg, But Pat Sajak Is Not a Judge on This Show 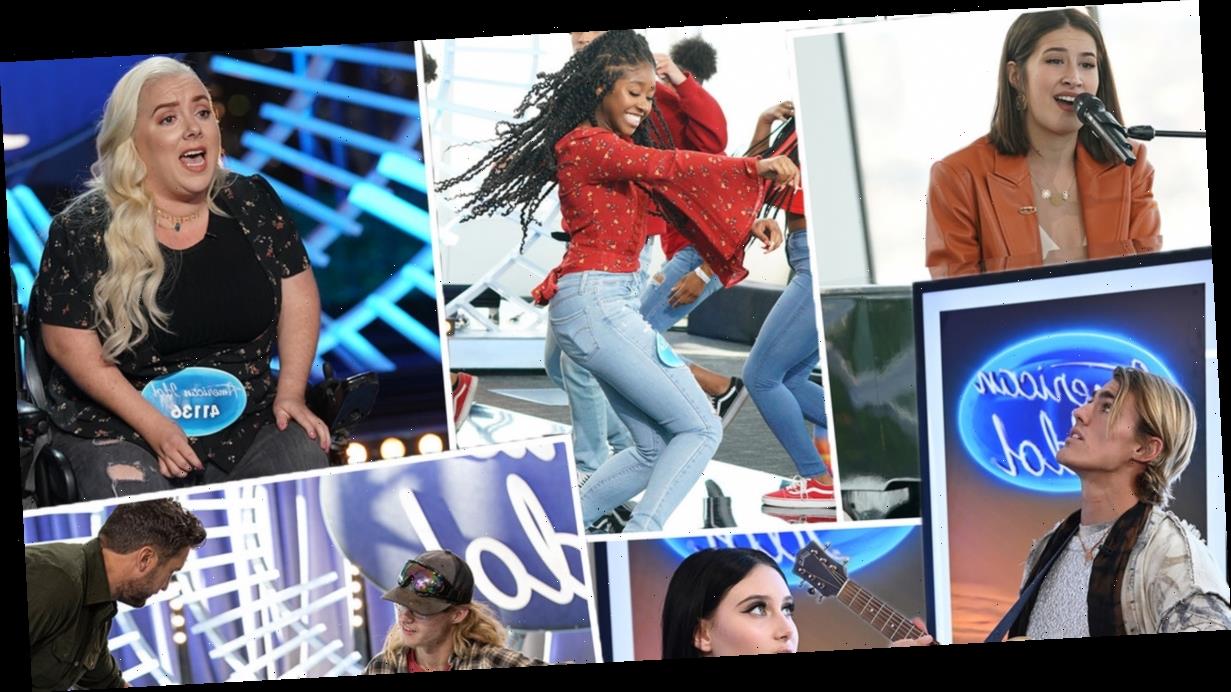 American Idol 5th Judge: Sorry Dawg, But Pat Sajak Is Not a Judge on This Show

On a night of incredible talent and powerhouse vocals, we can’t stop thinking about Lou Dawg trying to figure out who these three judges are.

We’ve seen some good talent this season on "American Idol," but this week we got to see some incredible talent.

This is not exaggeration or hyperbole, either, as there were some genuinely heartbreaking moments on that stage just from the power and emotional vulnerability of some of these contestants.

And then there was Lou Dawg, probably one of the coolest dudes to ever hit this stage. Previews showed us he had no idea who the judges were, which was funny enough, but then he tried to identify them.

Luke was flattered to be Justin Timberlake, but how Lou settled on "Wheel of Fortune" host Pat Sajak for Lionel Richie is beyond us. We get that he is a cool surfer dude who spends most of his free time catching waves, but is it possible to be that totally disconnected from music and pop culture.

Especially if you consider yourself a musician as well? It was easily one of the funniest audition moments we’ve ever seen.

This was also the week for duos, with an incredibly sweet and adorable couple taking on "Shallow" while another pair who’d only met 48 hours ago had the gal-mance we all only wish we could aspire to.

While there weren’t as many originals, one West Virginia boy brought all the mud from his truck into his audition (literally and vocally), while several others proved you can still show who you are as an artist on a cover. It’s all about your interpretation of the original message.

Fair warning, since I’m safe at home, I’m probably going to be a little harsher than my colleagues Lionel Richie, Katy Perry and Luke Bryan.

And just for giggles, I’m going to rank the auditions each night from worst to first to see who my favorites are. Will they move on? Will they win the whole thing? Will the judges recognize talent when they see it? Let’s find out!

(29, Compton, CA & 29, Compton, CA) While we love this duo as a pairing of pals (who’ve known each other for 48 hours at this point), Tavia just was not there vocally. She was all over the place on Gloria Gaynor’s "I Will Survive." The attitude was right, but the notes were all wrong. She could probably wrangle something there, but for this show, she’s out of time. Thankfully, there are other avenues if she’s determined to go reality competition. And hey, she got Terry out of the whole thing, the world’s coolest girl-tarist.

(22, Sweet Home, OR) With just a few bars, Emma showed she has a nice country tone to her voice, but it lacked that special something to take her over the edge for us.

(23, Oahu, HI) Lou is an interesting juxtaposition of a musician with a decent voice, the ability to play and absolutely no idea who any of the judges are, nor does he even know what Justin Timberlake looks like. So what is his musical background? Musical influences? He had a pleasant voice on a pleasant, airy song that fit his island vibes perfectly. We weren’t as hard on his talent or songwriting as the judges, but maybe because we’re okay with him having no idea who we are. Alas, the judges cut his journey short. Does he know Journey?

Interestingly, we got a little bit of the coaching process with Faith’s audition. We picked it up with her second song and saw as she was too hoppy and then didn’t quite pour her soul into the singing, even as her voice has some interesting qualities, cool character and a ton of range. She’s got the tools to really be something, but hasn’t taken the time to discover what moves her and what she wants to say as an artist.

(27, Costa Mesa, CA) This wasn’t the perfect vocal, but Marna has a "Million Reasons" to be proud of what she brings to the stage, and when she really belts, she’s got a very unique quality to her voice. We’d classify her as one of those diamonds in the rough who could probably use some training in bringing out the best qualities of her talent and voice. And we say all of that before acknowledging her disability and that she’s in a wheelchair, but that’s why she could use the guidance, because singing sitting is a different animal for many than doing so with a fully extended chest cavity. We love that Katy coached her a bit and she took the notes because that’s — in our mind — all she needs to really be something special, just some guidance.

(20, Goodrich, MI) We’re not sure about the "invisible earpiece," but if Jimmy could shake off some of those nerves and lose the crutch and really own his talent, he could be something really remarkable and special on this show. We think he’s really interesting and would love to follow his journey to see if he can break out of his shell and really start blowing people away.

(24, Pocatello, ID) There was a very funky, different old-school vibe to Chase chasing the fiddle with grit and growl. Does it have enough range to compete, it was hard to tell from this small bit, but he’s certainly interesting.

(19, Miami, FL & 26, Pembroke Pines, FL) Kat was definitely feeling more of the nerves, but she had more of the heavy lifting as this adorable couple took on "Shallow," though Space Cowboy had a very cool — and kind of Bradley Cooper-esque — tone to his own vocals Kat settled down as it went along and they were positively mesmerizing in their harmonies. By the end we were feeling as good about them as they clearly do about one another (though he’s still the slightly stronger singer … slightly).

(28, Phoenix, AZ) What a cool, authentic rock growl, though we didn’t quite get enough to ensure he has the goods all the way around his voice. But from this snippet, he’s definitely got raw talent.

(18, Clay, WV) What an interesting raw talent Zack has. First of all, he’s brilliantly fun to watch play guitar, even if he didn’t even realize he was out of tune. Then, his voice has such grit and growl to it, it’s as if he sings as muddy as his truck and boots are. And yet, there’s something so compelling and real about him. It’s as if the simplicity of his small life carries its way through his music in a way that touches your heart and draws you into his worldview so different from almost everyone else. Yes, he needs some training vocally, but you’d almost not want to touch it too much.

(20, Long Beach, CA) The progeny of musicians, Sophia "Star" may just be a prodigy herself. She had a very cool singer-songwriter vibe as she took on Bishop Briggs’ "Water." There was only one notable pitch issue in the early part, but after that, she settled into a gorgeous tone and emotional presentation that really had us. On top of that, she has an engaging and delightfully joyful personality, making her a keeper all the way around in our eyes.

(17, Temecula, CA & 22, Sonora, CA) Makayla was all grit and confidence taking on The Jackson 5’s "Who’s Lovin’ You," but she brought incredible pitch and control to it. She almost veered into the over-run problem, but managed to stay just this side of it, using them to showcase her control, rather than overcompensate an inability to immediately find the right note. They then cut to Devon, who was doing exactly the same things vocally on Sam Smith’s "Not in That Way." It’s like they’re the exact same artist in different genders, which was remarkable side-by-side. At least we can rank these lifelong fans at the same spot, which helps our list. They’re both fantastic.

(23, Springfield, IL) Sounding like an old blues musician sitting in a smoky club in New Orleans, Mosean has a smooth ease to his delivery. The song was somewhat lacking in dynamic range, but his voice itself was so impressive even on a repetitive rhythm. There’s no denying he has lived life and experiences his emotions through his music because it felt so raw and real and lived in in a way that no 23-year-old voice should.

(16, Menifee, CA) We were not ready for this to end. When Olivia hit her first note, we were throwing our pen right next to Katy’s because sometimes you just have it. At 16 years old, she brought every bit of attitude the song demanded and then she poured some stank on top of it just because she could. That’s a natural talent right there and someone who has absolute mastery over something that probably comes easy to her. It was a great first audition; everything she needed to do.

(26, Cypress, TX) Robyn’s "Dancing on My Own" is a tall order for any singer because it’s such a signature piece and it requires such depth of emotional connection and passion to really sing it. Ren had no problems with any of that, and she managed to both make it sound like her song without stripping too much of its originality away. This was recognizable appropriation for a good cause and one of the best ways to perform a cover tune. Ren is the real deal, with so much heart and soul in her voice she can break yours with almost a single note.

(24, Birmingham, AL) This aspiring dentist brought incredible artistry and vision — even as he kept his eyes closed — to Lorde’s "Royals." It was a beautifully fresh take on her song with new tricks and nuances every line and almost every other word. He had us hanging on every syllable excited about what he was going to do next, which is the kind of musician that can win this show.

"American Idol" shifts to Sundays and Mondays at 8 p.m. ET, starting next week on ABC

When are the Indian Wells Masters? Are Federer and Nadal playing? How to watch on TV and online – The Sun
Recent Posts