Home » TV and Movies » An Essential Guide to 'The Handmaid’s Tale' Terms, Because There Are Many Of Them 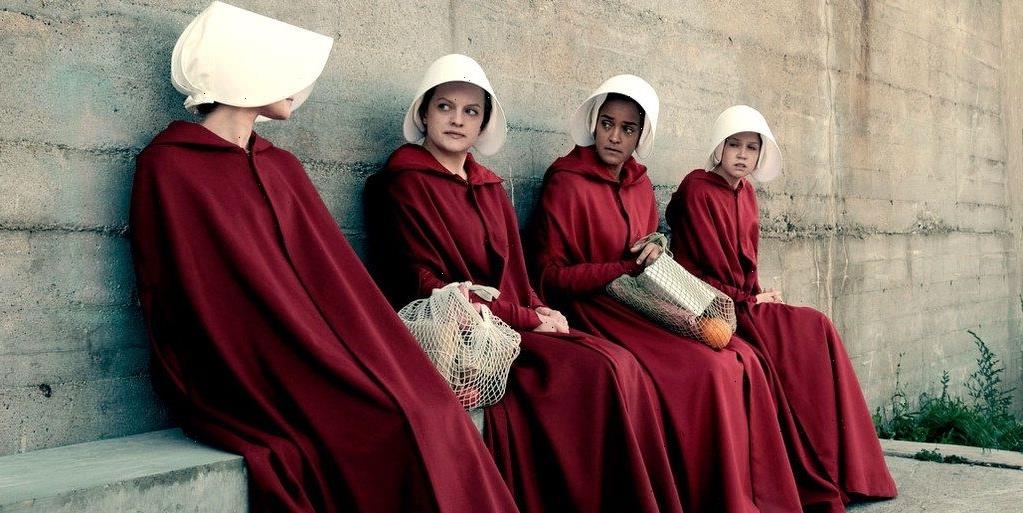 An Essential Guide to 'The Handmaid’s Tale' Terms, Because There Are Many Of Them

Hulu’s fourth season of The Handmaid’s Tale is just a day away from premiering on April 28 (eeek!). Now, the show may be based on Margaret Atwood’s wildly popular dystopian classic that came out way back in 1986, but the story still remains extremely relevant (almost too relevant) to today’s political climate (you know, protests, terrorism threats, threats to women’s reproductive rights… sound familiar?). It paints such a stunning portrait of the nightmare that could happen that you just can’t look away.

Atwood’s creation and the Hulu original both come with a myriad terms and phrases, some with more obvious definitions than others, that feel like their own language. Before diving into the new season, here’s a refresher on all the terms you’d need to know to navigate your way around Gilead.

Angels: Considered heroes in Gilead, the high-ranking army of soldiers fight against various enemies and keep guard of significant locations.

Aunts: A class of typically older women who are “true believers” of the totalitarian ways of Gilead. They are responsible for teaching the Handmaids and grooming them for their duties under the respective houses of the Commanders.

A Woman’s Place: the book written by Serena Joy prior to Gilead detailing her conservative beliefs. One passage from her opus: “Do not mistake a woman’s meekness for weakness.”

Birthmobile: A small van that transports Handmaids to a fellow Handmaid’s birthing at her Commander’s house. Handmaids are present at birth to encourage labor through repeated breathing chants.

“Blessed are the meek”: Aunt Lydia quotes from Matthew 5:5 but eliminates the subsequent “the meek…shall inherit the earth.” Offred points out this omission while taking a bath ahead of a Ceremony with the Commander and his Wife.

“Blessed are the silent”: As Offred notes, this phrase was added by an Aunt or someone more powerful to teach the Handmaids that silence and submission are valued.

“Blessed be the fruit”: How the Handmaids greet each other; this is said to encourage fertility.

Ceremony: When a Handmaid is ovulating, she is invited to the Commander’s bedroom to have sex with him while lying between his Wife’s legs with hopes of conceiving.

Colonies: Toxic areas that are cleaned by people shunned by Gilead, including Unwomen (see below).

Commanders: The highest-ranking men in the Gilead army; the only men assigned Handmaids to conceive.

Econowives: Working-class women who are married to men who do not become Commanders during Gilead rule; these households are not assigned Marthas (see below), and econowives do everything.

Eyes: Secret police officers who work for the Republic of Gilead; they are responsible for detecting traitors and monitoring all suspicious activity in Gilead. Eyes drive in black vans and also have the power to make arrests in public.

Gender Traitor: Someone who engages in same-sex activity; gays and lesbians who are discovered by the Republic of Gilead are sent to the Colonies (where they will eventually die of radioactive poison) or hanged.

Gilead: What the United States has become after a sweeping formation of a theocratic military dictatorship. Here is a map of Gilead’s territories.

Guardians of the Faith: Typically young men who are low-ranking in the Republic of Gilead. Some, like Nick before he got promoted, are responsible for washing cars and driving Commanders around while others maintain order on the street and carry machine guns.

Handmaid: A fertile woman who is assigned to a Commander and his Wife for two years to help the couple conceive. A Handmaid is typically divorced, was married to a man who had been divorced before Gilead, or has never married. Handmaids are assigned to a maximum of three houses and sent to the Colonies if she fails to conceive for all three.

Identipasses: ID cards used in Gilead; Offred and Ofglen show their Identipasses at various checkpoints during their walks to the market.

Jezebels: Prostitutes who are employed by a government-controlled club frequented by foreign ambassadors and Commanders like Offred’s Commander when he takes her out for the night. Moira becomes a Jezebel after getting caught following her escape from Handmaid training. Jezebels are allowed drugs and alcohol.

Little America: The area of Toronto where Gilead refugees who fled to Canada for safety have settled down.

Loaves and Fishes: The name of the grocery store where handmaids do their shopping. None of the products sold there have any words on the packaging, only pictures, because it is illegal for women to read in Gilead.

Marthas: Women who are infertile and work as cooks or servants in the house of a Commander.

Mayday: A secret underground resistance group that uses the term “mayday” to identify each other. Anyone at any level can be a Mayday.

“May the Lord open”: How the Handmaids greet each other; this is said to encourage fertility.

Nolite te bastardes carborundorum: Translated from Latin, “Don’t let the bastards grind you down.” The phrase was carved in Offred’s closet by the Handmaid who lived there before her. The Handmaid hanged herself shortly after.

Particicution: A form of execution in which a prisoner who has committed a serious crime like rape is beaten, trampled, and eventually killed by a circle of Handmaids.

Prayvaganzas: Public ceremonies sorted by gender. In the book, high-society girls raised in Gilead are married off to Commanders and other high-ranking officials in Prayvaganzas.

Red Center: A colorful short-hand name for the Rachel and Leah Re-education Center that just so happens to match the color the handmaids are forced to start wearing there.

Quakers: Viewed as outlaws of Gilead, along with Jews, Quakers are a group of religious and peaceful individuals who know the ins and outs of the Underground Femaleroad (see below). Following her great escape from Handmaid training, Moira is helped by a Quaker family.

Salvagings: Public executions sorted by gender. One type of salvaging is Particicution.

Sons of Jacob: The religious group that formed Gilead and staged a coup against the U.S. government.

Testify: A Gilead ritual where handmaids-in-training are forced to confess any “sins” (usually sex-related ones) like having had an abortion.

Tokens: Currency for Handmaids, Marthas, and other women which have illustrations that demonstrate what they can buy (since women are not allowed to read).

Wings: The white bonnet worn on Handmaids to hide their faces and leave them with almost no peripheral vision to “prevent us seeing, but also from being seen.”

Unbaby: A baby born deformed and will unlikely survive in Gilead. Also known as a Shredder.

Unwoman: Someone who is any of the following: infertile; not married; widows; feminists; lesbians; nuns; anyone else who questions Gilead rule. Unwomen are typically sent to the Colonies.

“Under His Eye”: How Handmaids formally say goodbye to each other in person. By extension, the phrase suggests that someone—a Guardian, a Commander, a fellow Handmaid, God—is always watching.

Underground Femaleroad: An underground network connected by various Quaker stations. Moira uses this network after her escape but is intercepted by Gilead officials before reaching her destination.

Marvel Studios Has First Oscar-Winning Director But How Many Oscars?