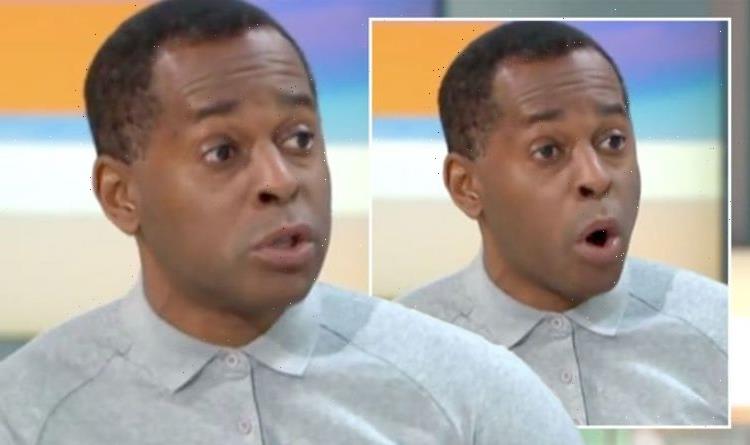 On Sunday evening, England lost the Euro 2020 final to Italy on penalties, with players Marcus Rashford, Jadon Sancho and Bukayo Saka missing their decisive spot-kicks. In what should’ve been a celebration of the national team reaching its first major tournament since 1966, sadly the fallout has been marred by vile racist abuse aimed at players online, something which the FA and several members of the squad have since spoken publicly to condemn. Discussing this on Good Morning Britain on Tuesday, a passionate Susanna Reid asked for co-star Andi Peters’ thoughts on the horrific trolling.

And Andi candidly responded to the horrific racism online, admitting seeing the abuse aimed at 19-year-old Saka left him “genuinely emotional” for the first time.

Susanna described the messages posted on social media as “disgusting” and “hideous” before asking Andi: “I can’t imagine what it would do to you (to see the messages)…”

Andi weighed in: “Do you know what? We’ve all spent the last month, you know, willing on our team. Our team.

“Willing on our team to do well so yesterday when I watched the show, I thought, ‘Oh, I didn’t know this was happening’.”

He continued: “So of course I went online and had a look and genuinely, for the first time ever, I was quite emotional.

“How a 19-year-old boy who has done everything for his country can be abused online by people he doesn’t know.

“And I pray he never sees what was online yesterday,” Andi added before admitting he became “sort of obsessed” with the horrific abuse to see the horrific extent it went to.

Taking aim at the social media companies, he said: “I’m sorry, Twitter, you can take out the N-word from anybody’s tweets. That is an algorithm.”

Richard Madeley then weighed in to ask if the people who write such disgusting things online should far prison time for publishing them.

“I think they should be – two things, educated,” Andi began, “and punished.

“I don’t know how you marry the two together. There (needs to be) an education piece about being black and British is as valid as being white and British,

“We have the most ethnically diverse government that I’ve ever seen, you’ve got Priti Patel, Rishi Sunak, there are so many people of colour in this government,

“Yet, why weren’t there phone calls yesterday being made saying, ‘Do you know what, Cressida [Dick], find all these people who sent all these tweets, at least I want the doors knocked on them.’”

However, when Richard asked if there was a sense the country was at a “watershed moment” when it came to discussions about race, Andi was emphatic in his response.

“I think it’s wishful thinking on your part,” Andi said. “I think this tanker of racism is so big, it’s so hard to steer.”

The competition host then lauded his ITV colleagues for their openness to learn, adding that he “can’t speak to everybody” but surrounded himself with people willing to learn.

He concluded: “Gradually, it’s going to be so – I don’t think I’ll see equality in my lifetime.”

Where is Shannon Matthews and when did she go missing? – The Sun