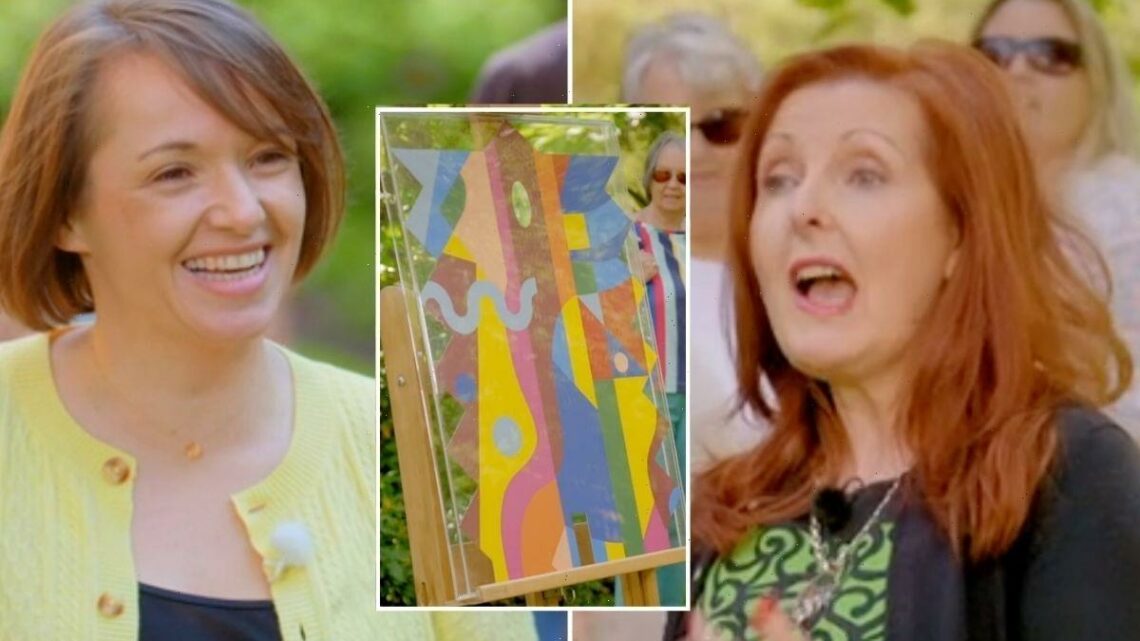 Fiona Bruce and the BBC team travelled to Bishop’s Palace in Somerset, a site of special religious significance, in a recent episode of Antiques Roadshow. Visitors from across the country had travelled far and wide with their precious heirlooms ready to be valued by some of the UK’s leading antique experts. Furthermore, one guest left the site with a huge smile on their face when they discovered the price of their abstract brightly-coloured painting, which had been bought at a garden party for 50p, had been priced up at a huge profit.

Specialising in her field for three decades, TV auctioneer Lisa Lloyd has worked with textiles, jewellery, and Grand Tour souvenirs and ceramics.

Her background as an auctioneer and director of Rosebery’s in south London for 16 years set her in good stead as an eclectic generalist.

While inspecting the print, Lisa began: “It really is a riot of colour, isn’t it?

She continued: “It’s a screenprint, so each of these colours has to be printed individually, the way it’s actually cut out and the way it’s mounted in the perspex frame obviously really sort of adds to that.”

Addressing her guest, Lisa asked: “What can you tell me about it?”

The owner replied: “It came to me about two years ago, mum bought it in a garden fete for 50 Pence.

“I went round to see her and thought, if I’m honest, I wondered what on earth she’d bought!” she chuckled.

“But she said she thought it would look wonderful in my house so I duly took it home and she’s right, it does look really good.”

Lisa then informed the owner “Well, it’s by Studio Alchimia, which is Italian for alchemy.

“Very avant-garde design movement that was founded in 1976 by Alessandro Guerriero.

“[They were] Furniture designers, artists that did experimental videos, [they did] theatre and theatre design.

“So, it was just a group of people that came together with similar design ideals.

“They rallied against the idea of brutalist design movements after the war.

“Like the Bauhaus, for instance, in the earlier 20th century where it really was kind of form and function, really, very industrial.

“These were very playful people, you know, they took very sort of ordinary-looking chairs but they made them very playful and painted them.”

A close up of the painting was shown to viewers at home while Lisa revealed: “There’s a little label on the back, which says this is a limited edition number 92 out of 208,” she asked: “I wonder how we got to a garden fete?”

“No idea, absolutely none,” the bemused guest responded and laughed.

Weighing up the price, Lisa told her: “We don’t really see an awful lot of their work in the UK.

“I would think that if this were included in an auction you’ll probably be looking at a pre-sale estimate of around five to 700 pounds for it.”

The guest, who was visibly gobsmacked by the estimate, said: “Okay.”

The TV specialist was quick to point out: “So, quite a good profit on your mum’s 50p.”

Antiques Roadshow is available to stream on BBCiPlayer

Meghan Markle news: Duchess has led Prince Harry 'by the nose' as Royal author SLAMS Duke as 'not too bright'
Recent Posts