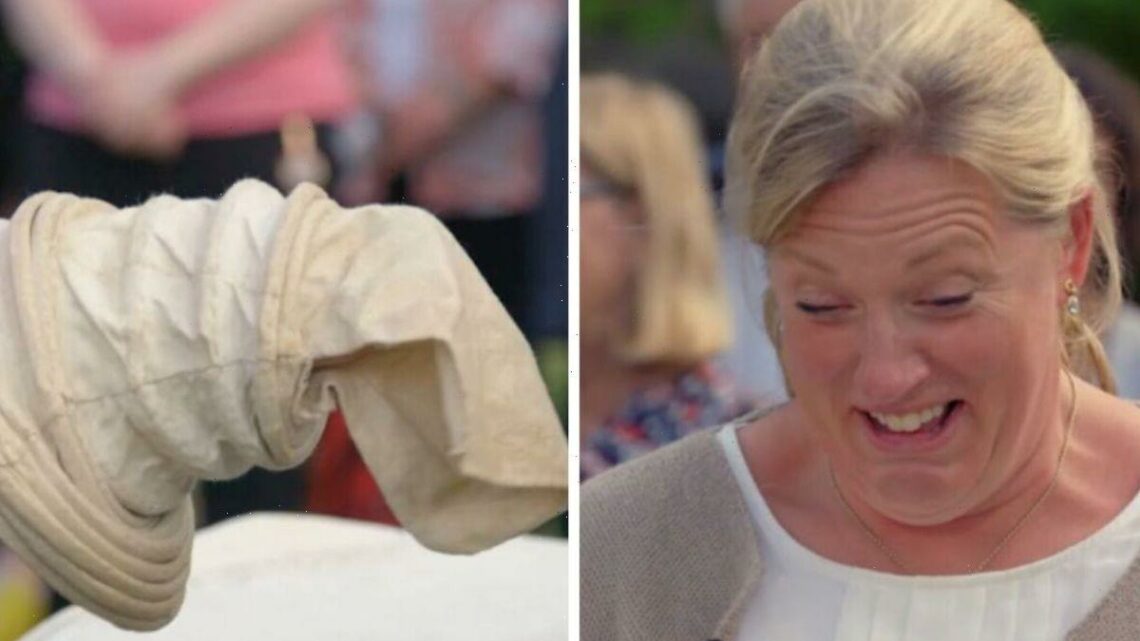 On Sunday night’s Antiques Roadshow, viewers tuned in to watch Fiona Bruce greet guests at Wollaton Hall in Nottingham. The revellers brought a number of unique items to be valued ranging from Victorian rings to rare teapots and unique bird cages. However, it was a Tudor sleeve which caught the attention of expert Hilary Kay.

The expert couldn’t contain her excitement when the guest brought the 500-year textiles to be valued.

The items included a bedspread and two pillowcases sewn by Elizabeth I and her ladies-in-waiting.

But the main item was an ivory silk satin sleeve and support, which Hilary explained would have fitted inside your sleeve to give it volume.

The guest began by explaining who the items belonged to and how she received them.

The items belonged to the Willoughby family who built Wollaton Hall in 1588 and, until their discovery, no examples of sleeve supports were known to exist.

“It may not look very exciting,” Hilary explained. “But I can tell you that the hair on the back of my neck is rising.”

As she inspected the items further, the expert continued: “I tell you, it doesn’t get much better than this. The condition is incredible.”

As she picked up the sleeve, Hilary admitted she had never seen another one like it.

The expert added: “This is really unexceptional collection that you’ve got here.

“But it gets better, the sleeve I have to say, I’ve never seen another.

“I mean it is such an exciting moment to be faced with something from the 16th century, which is in such incredible condition.”

Sharing the history of the sleeve and who owned it, the guest replied: “It is the sleeve from Lady Willoughby.

“She was called Elizabeth and she was the wife of the man who built this in 1588.

“And this is a picture of her here, not in this costume but in one of her very decadent costumes and apparently her daughters fought over her clothes when she died because there were so many jewels on them.”

Admiring the sleeve, Hilary went on: “Let’s just enjoy it for a moment.

“So it’s this fabulous ivory silk setting and the decoration which you can probably see more clearly on this panel here.

“It has been hot-stepped into the fabric to give it that pattern.”

After demonstrating how the sleeve would have been worn, Hilary turned her attention to the value.

She said: “There isn’t one in any of the museums. That is amazing. I mean it is a fantastic, incredibly important historical collection. And what’s it worth?”

“I think it was in a box,” the guest admitted before adding: “I have no idea. I didn’t even know anything about this at the beginning so I don’t think I want to know.”

The guest looked on in shock as Hilary added: “Who knows how much more it could go for?”

Antiques Roadshow airs on Sunday at 8pm on BBC Two.