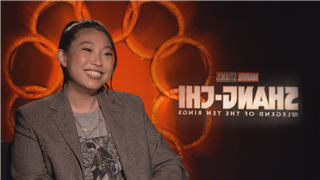 Awkwafina on 'Shang-Chi' and Karaoke With Simu Liu (Exclusive)

Peik Lin and Rachel Chu. Nora and Edmund. Sisu and Raya. If you cast Awkwafina in your project, you know you’re going to come out on the other end with a happy bestie-ship between her character and someone else. In Shang-Chi and the Legend of the Ten Rings, that someone is Shang-Chi himself, with Awkwafina as his best friend, faithful fellow slacker and would-be hero, Katy.

“Aww, man. It feels, like, so cool and exciting,” the actress says of her induction into the Marvel Cinematic Universe. And though she hasn’t taken it to DMs with any of her fellow MCU stars — and potential friends-to-be — she says, “But you know, maybe they went to another inbox or something. No, I think just being in it is kind of cool enough.”

On Zoom with ET’s Lauren Zima, Awkwafina discusses doing her own stunts, karaoking with Simu Liu and whether their characters’ friendship could become something more.

ET: It seems like you and Simu had a pretty fun time making this.

Who’s the bigger jokester between you two?

I think we both equally are definitely jokesters. I think we would often ramble off into mostly useless improv, where they’re just like, “OK, you can do improv, but can it just be relevant to the characters?”

They’re like, “We’re doing an action sequence, so we need less improv and more action.”

[Laugh] Yeah, but you know, we’re doing a whole bit.

Speaking of, let’s talk about your bus scene. Did you think to yourself, “Sandra Bullock, move over. This is my Speed moment”? Because that’s how it seems to me.

I appreciate that! [Laughs] I mean, if it was only as badass as Sandra Bullock’s Speed performance. And it’s funny that you even said it was my bus sequence, because I was doing such the least in that sequence. In terms of like, I was just driving. It was such a complicated and intense sequence to shoot — I think it took like four weeks — and I remember just looking in the rearview mirror and being like, “They’re doing insane things behind me on a moving bus.” And all I’m doing is, well, driving. But it was still cool.

What was it like for you to see all those fight scenes and the training and the work that goes into all that? What did you take away from it all?

Just that it’s not easy, and these are labors of love for everyone involved. Luckily, there’s an incredible net of support, but also you really are working with the best of the best and it’s really, really mesmerizing to watch.

Simu has talked about how much training he had to do for these action sequences. Did you ever help him practice that?

Did I spot, like, Simu? [Laugh] I don’t think I am capable of that. Like, you don’t understand, the choreography on some of these stunts was just really, really insane that I just really did not want to get in the way. Because you really have to be in the zone for that kind of a thing and you have to be on the top of your fitness game in terms of being ready for that. So, I really gave it up to Simu and our stunt team, yeah, they’re very impressive. While I’m making multiple trips to crafty and what not.

Kind of more fun for you though.

Well, I enjoy it.

You also got a karaoke moment, which is pretty great. Did you ever take that into the real world and go and do some karaoke together?

Simu and I have done karaoke a bunch of times, yeah. That day, that was like more forced scenario, but it was still very fun.

Do you have a go-to karaoke song?

Yeah, my go-to karaoke song is Michael McDonald, man. “What a Fool Believes.” Come on! Are you a fan?

Well, now I’m not sure if I’m thinking of the right song.

“What a Fool Believes”? Is that not Michael McDonald? [Reader: It is. McDonald and Kenny Loggins wrote the song, which McDonald’s Doobie Brothers released in 1979. It won the GRAMMY for Song of the Year the following year.]

Can you sing it for me?

Please don’t stop. I’ll take the rest of my time of you singing.

I can’t believe I did that. Are you blushing? Are you nervous for me?

I’m so happy that this is happening.

Are you cringing? OK, good

I also got to ask you about the relationship between your and Simu’s characters. There’s an “are they or aren’t they” thing going on. What is your verdict?

I dunno. I think they have a really, really strong friendship, and that friendship is one based on loyalty and a blind trust on Katy’s part, for sure, and also kind of an unspoken understanding. I think Shang-Chi is going through a lot in this movie, maybe taking on a kind of neurotic girlfriend [is] not the best thing that you want to do. But I think if anything were to happen, it would be founded on that friendship.

Right? Thank you. Maybe don’t. And then he’s like, “But now I want you more,” as is real life.

I mean! How much time do we have?

Right? We can take off our shoes and just do all of that.

What would you tell the fans about this movie? It’s a big question, but what does it mean to you to give them this movie and what do you think they’ll take away from it?

Oh, man. Well, it just means so much to be a part of a movie like this, and I think that there’s a really beautiful story here that I think is reflective of where we are right now. And I think it’s enjoyable. I just really want people to have fun, because it’s been a while since we’ve been able to return to any sense of normalcy, and I just hope that this can be a little bit of a glimmer of light in some, like, dark times.

Shang-Chi and the Legend of the Ten Rings is in theaters on Sept. 3.

Mystery over sixteen remains that were found in an unmarked grave