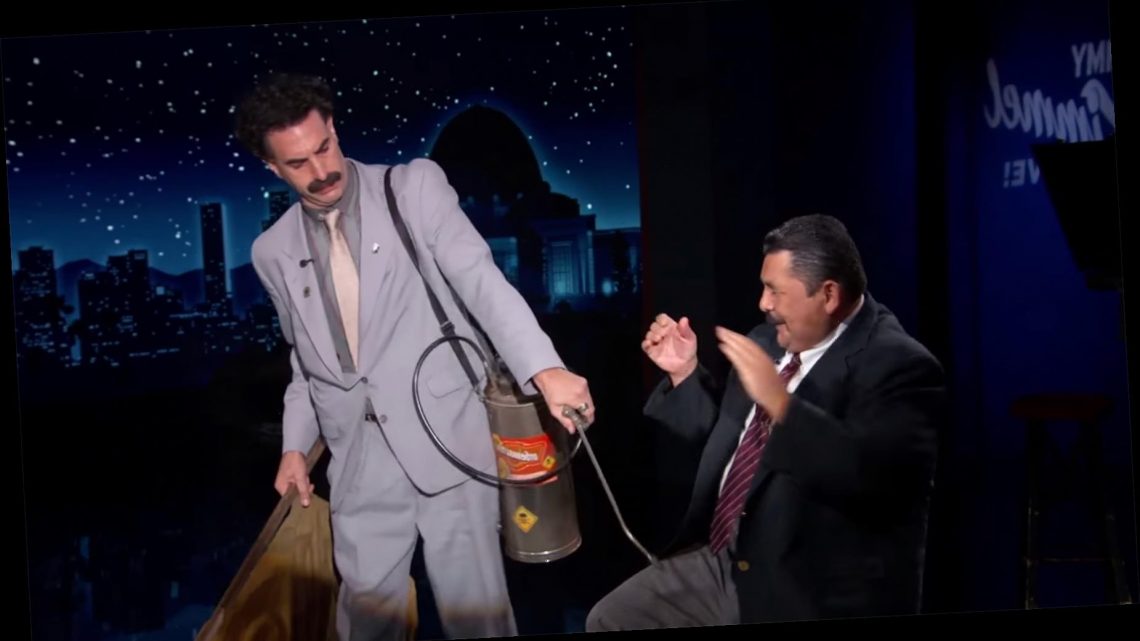 The bit started with Borat walking on stage with a magnifying glass and frying pan, searching for and smashing any remnants of the virus he could find. Things, obviously, only got weirder from there. Borat’s “examination” included a conspiracy theory-riddled questionnaire (such as when was the last time Kimmel consumed unpasteurized children’s blood), a rectal temperature check using a thermometer duct-taped to a large stick, and a hook that latched onto Kimmel’s fly, which Borat claimed would tell whether or not the host’s scrotum had turned green.

To complete the test, all Borat needed was a “liquid release” sample, and to show exactly what he meant, he pulled out two jars of semen he claimed came from Jimmy Fallon and Conan O’Brien. “You can put yours on top of Conan’s,” Borat cracked, “I’m sure it’s not the first time your sperm has been mixed.”

The second half of the “interview” featured an appearance from Borat’s daughter Tutar (in typical Cohen fashion, the film is being rather coy about who exactly is playing Tutar in the Borat sequel, but it’s believed to be Bulgarian actress Maria Bakalova). Like father, like daughter, Tutar also tried to get hold of Kimmel’s pants, and while the host was apprehensive at first, Borat offered him a deal he couldn’t refuse — his own slacks in return.

Borat: Subsequent Moviefilm: Delivery of Prodigious Bribe to American Regime for Make Benefit Once Glorious Nation of Kazakhstan is set to premiere this Friday, October 23rd, on Amazon Prime Video.

TikTok’s Larray Calls Out Influencers in His Diss Track 'Canceled'