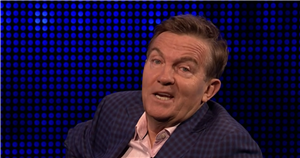 The Chase presenter Bradley Walsh was left fuming on Wednesday, as the first contestant up dissed his suit in front of the entire audience.

Contestant Katherine was first to face chaser Mark Labbett – AKA The Beast – on Wednesday's show, supported by her team who were made up of Ollie, Carlton and Sharon.

But Katherine left a rather sour taste in Bradley's mouth as she made her introductions.

She explained that she's "very into" upholstery, leading to some quizzing from Bradley.

He asked: "What does that mean – you do a lot of sitting down?"

Katherine cheekily replied: "A lot of sitting down, a lot of taking fabric like your suit and covering sofas with them!"

An offended Bradley looked down at his dapper checked purple suit in horror as the implication of her words settled in, an affronted expression on his face.

And fans at home were similarly unimpressed, as one penned on Twitter: "Katherine has really endeared herself by dissing Bradley's suit! #TheChase."

Another baffled fan wrote: "She does what? Takes suits etc. and attaches them to sofas? #TheChase."

Unfortunately, Katherine was caught by The Beast before she could really get going, having opted for the £8,000 she'd gathered in the Cashbuilder rather than a low offer of £2,000.

And there was some stern advice to her fellow contestants from Mark, who suggested taking the low offer isn't always the worst choice.

Second contestant Ollie, however, was much more successful after taking his advice, and soared through to the Final Chase after securing £1,000 for the prize pot.

Later on the show, it was The Beast's turn to be cruel to Bradley, as the pair discussed the etymology of 'dexterity' – meaning right-handed.

"So your whole family is sinister, then?" Mark clarified with a giggle, as Brad self-consciously wrung his hands.

Fans at home quickly agreed: "I'm a sinister person then? No wonder I'm the oddball of my family!"

The Chase airs from 5pm weekdays on ITV.