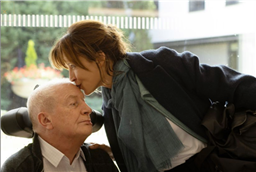 Beautifully upholstered and decked out with a starry cast, Everything Went Fine (Tout S’est Bien Passé) is the sort of comforting, thoroughly mainstream commercial film not often seen in competition at the Cannes Film Festival. Although the subject of euthanasia does not normally suggest a good time at the movies, French director François Ozon serves one up anyway with the help of a raft of crafty and appealing veteran actors, lush filmmaking and savvy and deft handling of the central emotional dynamic.

Shortly after family patriarch André (André Dussollier) suffers a debilitating stroke, the 85-year-old insists to his daughter Emmanuèle (Sophie Marceau) that he wants to end to it all, on his own terms. He seems something of a borderline case, alternating between misery and a kind of crabby alertness about his condition that nonetheless leaves him keen to pass over into the great unknown.

This naturally becomes the only subject on the table for his family, which also includes Emmanuèle’s sister Pascale (Geraldine Pailhas) and their mother Claude (Charlotte Rampling), a noteworthy sculptress who herself has Parkinson’s and maintains a pronounced emotional remove from her husband, whose own private life has evidently long centered on a man.

The film is based on a novel by Emmanuèle Bernheim, and these complex sentimental underpinnings provide the film with fresh and nuanced perspectives on an ordeal confronting the diverse family members.

His age and condition notwithstanding, old André is a man accustomed to getting his way and starts the ball rolling by telling Emmanuèle, “I want you to help me end it.” This involves some discreet investigation with an organization called The Right to Die With Dignity, as euthanasia is outlawed in France. Hana Schygulla is in briefly as a contact in a shadowy world in which Emmanuèle and the others must operate with the utmost care.

But while the family understandably frets over the situation, albeit in a highly civilized way, old André embraces the occasion, ultimately celebrating with a fabulous send-off meal at his favorite restaurant. For a film about impending death, this one goes down very easily.

The prolific Ozon, who is still best remembered internationally for some of his early hits, including Under The Sand, Swimming Pool (both with Rampling) and 8 Women, directs with a cool, confident hand. The dramatic conclusion feels just right and you have to hand it to Ozon for pulling off the trick of making a vibrant man’s death a happy ending.