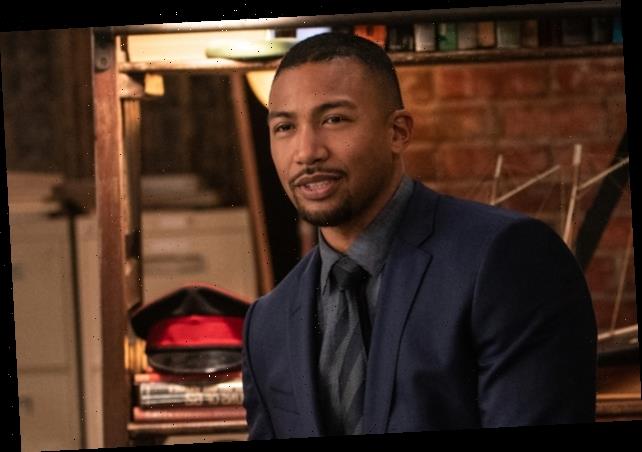 This Sunday on NCIS: New Orleans (CBS, 10/9c), while Pride undergoes a specialized treatment to help him figure out the Man in the Red Suit’s identity, a new officer, Special Agent Quentin Carter, pops up at the office to meet his colleagues.

Charles Michael Davis, whose previous TV credits include The Originals and Younger (where he is also a series regular), previewed Carter’s arrival and the semi-warm welcome that Lasalle’s successor receives.

TVLINE | Under what circumstances do we first meet Special Agent Quentin Carter?
He is making coffee, I believe. I think you catch him during his coffee break. Nothing too crazy or dangerous.

TVLINE | He just kind of pops up there at the office? He’s not specially recruited for a case or something?
No, I think he just shows up for work early. [Laughs] He’s an overachiever. That’s the first instance of him on the screen, but you get to see him in action right away.

TVLINE | Does he already know anybody on the team?
Well, he was recruited by Special Agent Pride, and he came all the way from Hawaii. No, I’m only kidding — I personally just came from shooting something in Hawaii. But yeah, the character has a history of bouncing around. We find out later that he was in Sicily, he usually stays somewhere for an average of eight to 11 months, and then he gets a new position. He’s a bit of a nomad.

TVLINE | How do the team members take to him? The synopsis describes him as “arrogant.”
From his perspective, he thinks that he charmed them. From their perspective, though, he might be a little much at first.

TVLINE | Because in some of the photos, Sebastian is looking a little standoffish with you.
No. That’s just Sebastian’s natural resting face. [Laughs]

TVLINE | Does Carter feel any burden in being the “Lasalle replacement”? Does that come up?
No, there’s no burden from that. I think Carter has his own standards, so it isn’t about necessarily fitting in with the team as far as being liked, or chemistry, or group dynamics. He’s there to set a high standard — that’s first and foremost, to protect and serve and not, like, get along well with your colleagues and make friends. For him it’s about doing his job very, very well.

TVLINE | Speaking of high standards, he’s looking very dapper. I mean no henley, no flannel, no combat pants. Is that just his style?
I just don’t think he’s experienced summer in New Orleans. [Laughs] He could wind up in cargo shorts. Or be wearing linen suits like Miami Vice. I think it’s just part of his character. He likes to keep it all together and look sharp. I think he goes by Dion Sanders’ quote: “If you look good, you feel good; you feel good, you play good; you play good, they pay good.”

TVLINE | Are there any early hints that he has any secrets, any baggage?
There’s a hint, as far as you don’t know much about his personal life. What we do learn in the first episode is that he comes from a line of family members who were in the service, whether it’s Navy or Army or whatnot. So, there’s a part of his family that he’s in sort of competition with.

TVLINE | Having been on The Originals (which shot Atlanta for the Big Easy), how does it feel to be “back” in New Orleans?
We used to drive to work and pretend to be in New Orleans and now I actually live in New Orleans, so it seems strangely familiar. I was walking by a graveyard the other day—

TVLINE | Oh, boy….
Yeah, I was like, “We had one of these built on set in Atlanta, and here I am just walking by one on my way to pick up hot dogs down the street.” It’s kind of funny to me.

TVLINE | What’s warmer, the Atlanta version of New Orleans or the real deal?
It’s only March here and already I can tell it’s definitely warmer!

TVLINE | Before you go, a Younger Season 7 question: Do you think that Zane has accepted that Liza lied to everyone, or might he still be bitter about it?
Hopefully, when we come back, he’s understanding of it. We start filming [Season 7] at the end of this month. I think he’s just bitter because he is so pissed off that he was the last one to find out, and I think he’s so used to being a step ahead, right? Like, he did not see that, and it was right in front of him. So, I just think he’s just upset. He’s upset at himself.

Want scoop on any of the above shows? Email InsideLine@tvline.com and your question may be answered via Matt’s Inside Line.