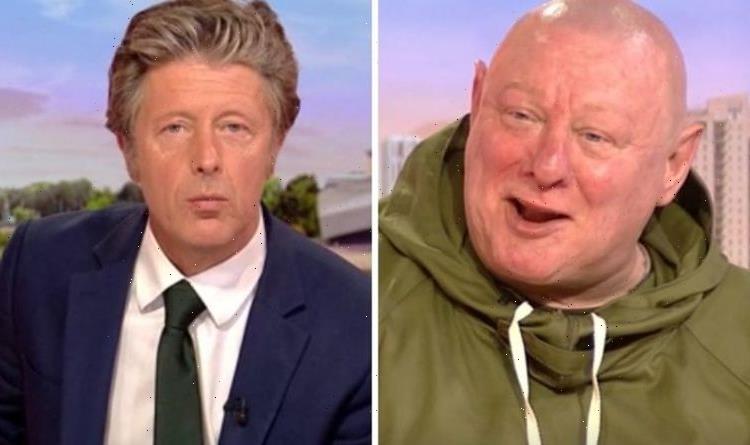 Charlie Stayt mocked by Shaun Ryder over BBC Breakfast hairdo: Has a mullet!

During Wednesday’s BBC Breakfast, Shaun Ryder spoke with BBC hosts Dan Walker and Louise Minchin all about his new album. However, the interview soon took an unexpected turn when the Happy Days frontman discussed his time on Celebrity Gogglebox. The show played a clip of Shaun and his Gogglebox co-star Mark Berry, also known as Bez, while they watched and commented on an episode of BBC Breakfast. Although, during the clip, Shaun could be seen poking fun at host Charlie Stayt’s hairstyle.

“He’s giving mullet vibes off, isn’t he?” Shaun said to Bez in the clip.

BBC’s Dan then brought up how he knew Shaun was a fan as he was under the impression Louise had already departed the show after announcing her exit earlier this year.

“You are a viewer as the first thing you said to me was that you thought Louise had gone already.”

As he scratched his head, Shaun said: “Yeah, I thought she had gone.”

“She’s going to be here for a while you’ll be pleased to hear.”

Shaun added: “I thought you’d gone around the world on a yacht.”

Turning the interview to chat about his upcoming tour, Louise asked: “You’re going to be going on tour, aren’t you? That’ll be exciting.”

“Yeah, we are,” the singer replied as he explained he was meant to tour last year but it was cancelled due to the pandemic.

Louise went on to ask whether the past year was the longest time he had been at home.

“I know people have had a hard time and it’s been really nasty for a lot of people, but I actually enjoyed spending time with my family and the kids.”

“That’s been one of the benefits,” Dan weighed in.

Viewers were delighted to see Shaun on the breakfast programme and many took to Twitter as they anticipated the singer would swear.

One tweeted: “Waiting with great anticipation for Shaun Ryder to take #bbcbreakfast off-air with his antics. Something that the vast majority of the great British public would be very grateful for.” (sic)

A third added: “Shaun Ryder, best guest #bbcbreakfast has had for years, good tune too.” (sic)

“Waiting for Shaun to swear,” a fourth joked.

Luckily, Shaun kept his language clean as the interview concluded without a hitch.

BBC Breakfast airs weekdays at 6am on BBC One.

The Beckhams lay out plans for their Cotswolds 'wildlife corridor'