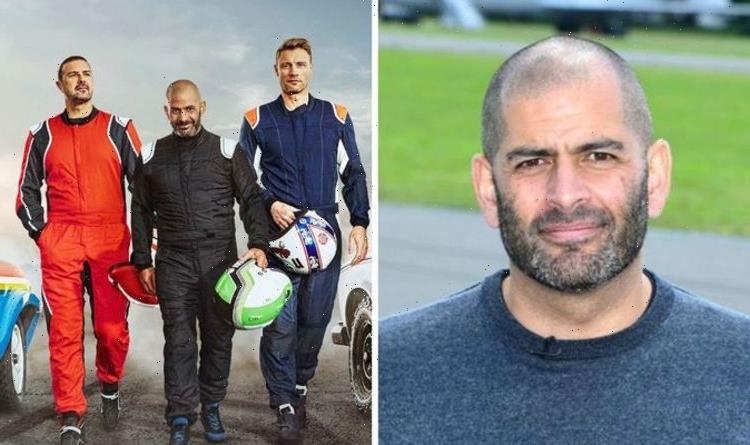 Chris Harris, Andrew ‘Freddie’ Flintoff and Paddy McGuinness are back behind the wheel with a brand new series of Top Gear on BBC One. The new series kicks off on Sunday as the trio head to the British Grand Prix for the competition of a lifetime with some of the top F1 drivers. With the COP26 conference still underway in Glasgow and after the fuel shortage crisis, Chris opened up on his feelings of “guilt” when driving petrol and diesel cars.

In September 2021, petrol stations across Britain had cars queuing for fuel as a crisis circulated at the shortage of tanker drivers.

Many drivers were concerned with how they were going to manage getting to and from places without having petrol in their cars.

Climate change has also been a big issue over the years, and people have been warned by naturalists such as David Attenborough and Greta Thunberg that “time is running out”.

The COP26 conference in Glasgow has been underway for a few weeks, where world leaders came together to put forward a plan to begin to save the planet.

Sales in electric cars have seen a rise over the last few years, and with the fuel crisis and climate change warnings, they have grown more popular.

When asked about feeling “guilt” at driving, Chris admitted to Radio Times: “I can’t deny it’s at the back of my mind all the time, so I have started driving a bit less.

“I now put my bike on the train when I’m heading into the BBC’s London office. I’m not doing it to be morally superior. It’s quicker and a whole lot more fun than sitting in a traffic jam.”

Also speaking on whether he would buy electric cars in the future, he said: “I’m about to buy a hybrid car that has a 100-mile electric range and a petrol engine.

“But on a long journey, you need an efficient petrol engine because we just don’t have the infrastructure for electric yet.”

Chris also admitted he and those at Top Gear have “taken on board” environmental concerns when it comes to racing around in petrol cars – so could a lot more electric vehicle be making their way onto the show?

The trio goes abroad for the first time in 18 months and gets more competitive than ever in the new series of Top Gear.

They tackle the icy winds of Iceland in some British ‘classics’, head to Cornwall in some bargains for new drivers and reinvent the great British camping holiday with the help of three new electric cars.

In an interview with the BBC about their time filming the new series, Paddy commented on the chemistry the trio have.

“Our chemistry comes naturally. You watch a lot of shows, and people are striving for that chemistry. But it either happens, or it doesn’t, and from the off, it just happened for us without even trying.

“Even when we were messing about together before we had even filmed an episode, it was insane. Nothing is off-limits with us. We have a great laugh off-camera, as well as on it.

“I think that’s why it’s been such a success – because people believe us. Long may it continue!,” he revealed.

The synopsis for Sunday’s first episode reads: “Track specials. They’re some of the most exciting cars on the planet.

“Road-going sports cars made faster and sharper, all to make you feel like a hero around a race circuit.

“Armed with some of the latest, most potent track-special offerings from McLaren, Aston Martin and Alfa Romeo, the presenters headed out to see how they’d fare at the ultimate track day: the British Grand Prix weekend at Silverstone.

“And against a trio of the fastest drivers on the planet: F1’s Sebastian Vettel, Lando Norris and Antonio Giovinazzi. No pressure, lads.”