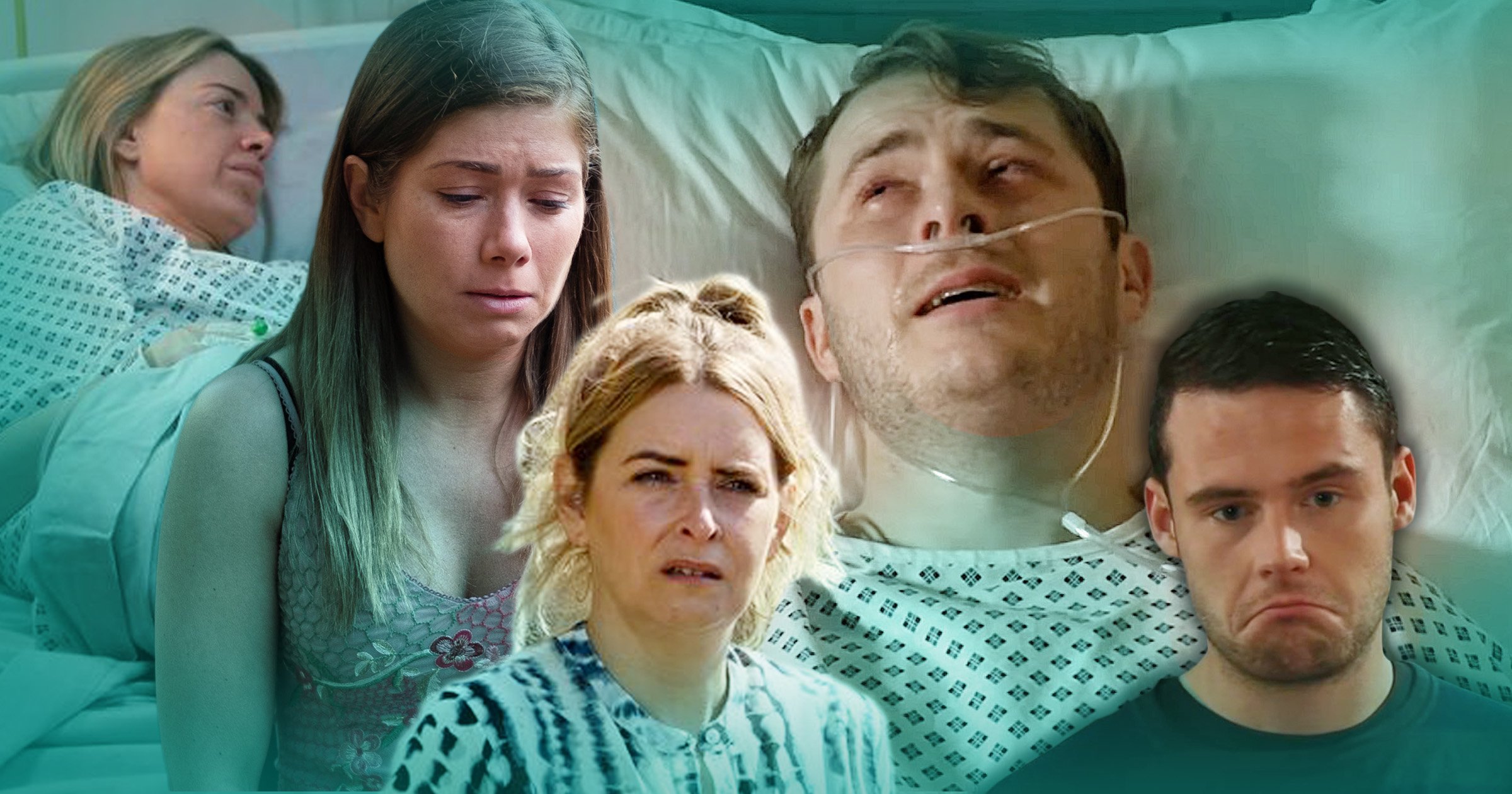 Blazing into the Queen Vic in full party mode, dressed in every colour of the rainbow and with joy in their non-sunken eyes, Ronnie and Roxy Mitchell were a breath of fresh air in EastEnders.

Who would have guessed the downward spiral that would destroy their lives right up until a double drowning on a New Year’s Day wedding?

Ronnie in particular was hit with trauma after trauma, cheated on, facing her sexually abusive dad, watching her long lost daughter die before her very eyes, swapping her baby with another after it died, being imprisoned, killing a man with a car boot, being stalked (twice) and suffering a devastating miscarriage to name a few.

And Roxy fared almost equally as badly, with a drug addiction, an attempted rape, being almost killed in a car crash and falling through an icy lake. Both at New Year incidentally, a time for many to reflect but for the Mitchell sisters to fight (and eventually lose) their lives.

It was absolutely exhausting to the point that the excuse for killing them off was that you could hardly see Ronnie going to buy a pint of milk after everything she had been through.

Whether or not you agree with that extremely controversial decision, there’s no denying that the torment eventually signed the death warrants for characters who simply ran out of bad things that could happen to them.

Between their arrival and their ending, their brightness and sass was lost, save for a few short-lived romances and, um, Ronnie buying a gym.

In fact, the only time they fully recovered that bright and feisty, party animal promising atmosphere was at Ronnie’s wedding do.

Yeah the one that preceded her death with her sister. It was pretty typical of Ronnie’s luck that she was dragged to the bottom of a swimming pool by a dress that was meant to signify the best day of her life.

Ronnie and Roxy were – and still are – fan favourites, with outstanding actresses in Sam Womack and Rita Simons.

Everyone loves Abi Webster, played by the absolute revelation that is Sally Carman. Lauded by fans and critics alike for her astonishing performances, particularly when her son Seb was murdered, she is a captivating star and one of Corrie’s best.

But, even that can’t stop it being too much when she is seen to be devastated on screen every waking moment. Fans find themselves (somewhat guiltily) stopping caring about what happens to her.

Really? Again? How much more can this poor woman suffer?

Abi entered Weatherfield as a drug and alcohol addict, broken by her lot in life and the destructive downfall that followed.

It led to her losing her beloved twins and turning Seb against her, but this was only the start for her. Oh yes, the writers had big plans for her. Or against her anyway.

Several relapses, the murder of her son, being attacked by her ex, being abandoned at a roadside, falling through a sinkhole, being taken hostage at gunpoint in a flash flood, having her marriage fall apart due to infidelity and facing a custody battle for her son, fans were wondering when it would stop.

She recently had an uplifting reunion with Kev, Jack and Alfie, and it was odd seeing Sally allowed to smile during a scene.

With all she has been through, we are just waiting for it all to crash and burn once again. Which removes the point of the (temporary) happy ending.

I can see the appeal of utilising strong actors again and again. When you have talent like Sally, who plays tragedy so well, it seems logical to hit her with all your that pen of doom has got.

But it’s short-sighted. The risk is having a character sapped of any joy or lightness, to the point that viewers get more annoyed than engaged.

These stories can all be played out over time, but there needs to be a respite. You can have the best actors in the world, and the most explosive storylines, but if viewers lose that connection with a character, then all is lost and you are culling your golden goose.

Once that first storyline hits a chord and you realise the talent you have on your hands, a tricky balancing act needs to be struck.

Aaron and Charity are following an Emmerdale formula of tormented back stories, heaps of loss, and abusive relationships.

By the time Aaron left, it felt like more like a relief; a feeling which surprised many when he departed, as years previously, losing such a prominent character was unthinkable.

And I fear the same trajectory for Charity. Her acerbic quips and OTT and hilarious schemes are few and far between.

After spending years on the radar of Cain Dingle and Ross Barton, in mutually destructive partnerships, she found some respite in a relationship with Vanessa.

Which was shattered with absolute brutality, another excuse to highlight that Charity makes mistake after mistake. We get it, Charity is the arbiter of her own misery.

She now finds herself in what feels like a directionless relationship; and with a pregnancy it appears she doesn’t seem to want.

EastEnders has a similar problem with Ben Mitchell, who goes from horrible criminal actions like people trafficking and taking hits out on his own family, to a hauntingly sympathetic character plagued with traumas you would wish on nobody, such as losing his hearing in a terrible accident, homophobic abuse and rape.

Maxine in Hollyoaks has had a minimal rest from trauma before the announcement of The Long Walk Home episode ahead, which will see her face terrifying experiences after a night out.

An important storyline, one which Hollyoaks will do well, but one which might be undermined by the sheer fact that Maxine has already been through way more than any human could ever recover from.

And therein lies the issue with the endlessly tragic characters.

Soaps have a high degree of artistic licence in this sense; grief over a death is often fast forwarded, recovery from illnesses and injury seem to be more swift, and events that would leave many scarred emotionally for life are long forgotten to the storyline archives after a couple of years.

The reason being, that watching this play out in a more realistic time frame would take away any entertainment value and leave BBC News feeling uplifting.

However, there is a line here.

When a character is just a vessel for horror after horror, they are no longer relatable, and sympathy risks being turned into frustration and apathy.

With so much happening, characters are changing their values.

Child kidnapper to teacher. Killer to love’s young dream. Violent attacks to mother of the year. Vicious bully to staple of the community.

Each storyline forces us to change our perception over and over, and this lack of consistency makes characters harder to invest in.

Soaps have a lot of successes in shining a bit of light and dark throughout long stints – it’s the only genre of drama that is capable of doing this.

But mistakes are being constantly made when a character becomes a fan favourite and subsequently a poster person of every ‘dark and gritty’ theme the show tackles.

It’s too late for Ronnie and Roxy, a soap scar for me that will never heal.

I implore soaps to scale things back before the current wave of similar characters suffer the same burnout.

They’re not doomed yet, but some of them are very damn close.