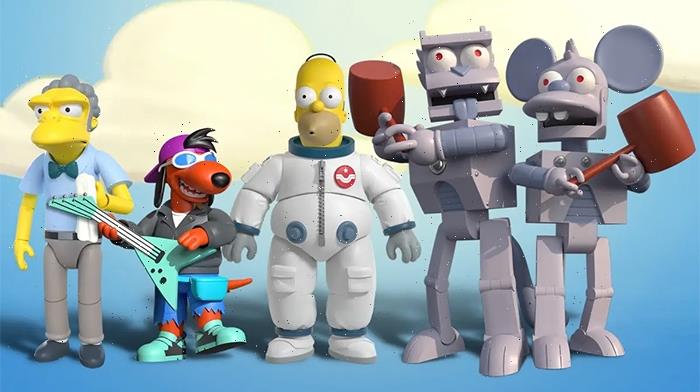 Following their outstanding new line of action figures inspired by Mighty Morphin Power Rangers, the toy makes at Super7 are tackling the longest-running, primetime scripted series of all time: The Simpsons.

Super7’s first wave of The Simpsons action figures isn’t keeping things simple by starting off with the regular versions of the main members of the family. Instead, they’re releasing some figures from fan favorite episodes and one of the signature supporting characters who knows how to sling a drink or two.

First up, inspired by The Simpsons episode “Deep Space Homer,” we have the family patriarch suited up for a little trip to space. Along with Homer in his astronaut gear, you’ll get an ant farm (try not to break it), the loose potato chips that are so elegantly eating in zero gravity, and the inanimate carbon rod. Plus, there are some interchangeable hands and heads to create a variety of poses.

From “Itchy & Scratchy Land,” we have the terrifying robot versions of the famous cartoon cat and mouse, Itchy and Scratchy. The mechanical mascots start attacking humans in the park, which is pretty scary since they have all the dangerous weapons that they use on each other in the cartoons, such as a chainsaw, a mallet, an axe, a tommy gun, and a tiny walking axe. Scratchy even comes with a nice “Bort” souvenir license plate.

Not every figure in the first line of Super7’s toy line for The Simpsons is inspired by a specific episode. In this case, we have the average Moe, owner of the tavern that Homer and his buddies head to after work. Moe comes with the red phone that gets prank calls from Bart, a jar of pickled eggs, a panda in a box, a cloth apron, a rag to wipe down the bar, and the signature “Flaming Moe” drink.

Remember when Itchy and Scratchy added a new friend to the mix? Of course you do! Poochie is one of the most famous characters from The Simpsons, despite only prominently appearing in a single episode of the series, within The Itchy & Scratchy Show, which is itself within The Krusty the Clown Show.

After ruining the perfect formula of the violently slapstick cartoon, he was quickly dispatched with and shoddily sent back to his home planet, a trip which also killed him. But now you can bring Poochie back to life with his surfboard, skateboard, guitar, and fanny pack. So here’s hoping that the regular Itchy and Scratchy will soon get figures that Poochie can hang out with.

Each of the Super7 The Simpsons action figures are $55 each. That’s a bit salty, but these look like the best action figures that the animated series have ever received. However, because they’re made-to-order, they’ll only be available for pre-order until September 20, 2021. After that, you won’t be able to order them. Hopefully this is just the beginning of a huge collection, and the pricetag won’t keep collectors away.

Paypal launches UK cryptocurrency trading service – how does it work and what are the risks?