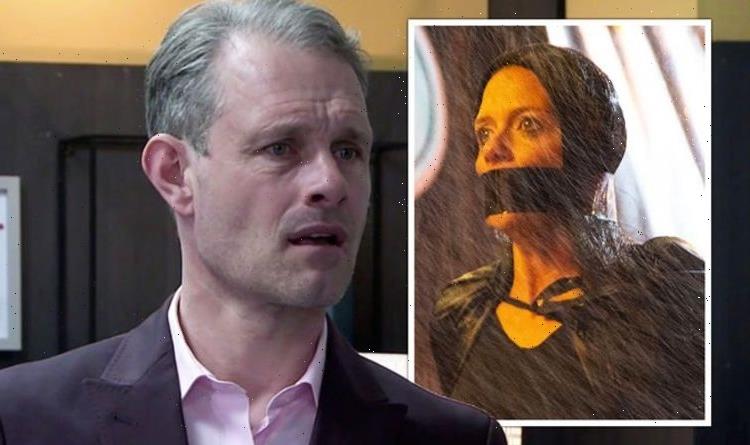 Coronation Street’s fan favourite couple Nick Tilsley (played by Ben Price) and Leanne Battersby (Jane Danson) could soon be hit by heartbreak. The duo have had a difficult year after they were forced to go into hiding after Leanne helped police get dangerous criminal Harvey Gaskell (Will Mellor) arrested for his drugs crimes. With Harvey in jail, the couple have felt safer in recent months, but that could all change. According to official ITV soap spoilers, Harvey will soon escape from prison in a bid to get revenge. Will he end up killing Leanne, leaving Nick distraught?

In upcoming scenes on the soap, Harvey deliberately injures himself in prison and demands to go to hospital.

Later on, as an enormous storm hits, the prison van carrying Harvey is driving along the same lane in which Dev (Jimmi Harkishin), Aadi (Adam Hussain) and Asha Alahan (Tanisha Gorey) are sitting in their stationary car.

The family are lost on the way to their holiday destination, with a fallen tree blocking their way on the country road.

When a guard on the prison van pulls a knife, the van swerves and hits the Alahans’ car, causing serious damage.

Meanwhile, using the crash to his advantage, Harvey pulls himself from the van out into the torrential rain and prepares to make his escape.

Kevin Webster (Michael Le Vell) soon arrives at the scene of the crash, but Harvey attacks him and steals his pick-up truck, driving away from the scene.

Later on, Leanne is alone in the bistro dressed up for Halloween as Morticia from The Addams Family.

However, it’s not long before she finds herself face to face with Harvey who traps her in the Bistro.

When Leanne attempts to escape, Harvey gets physical, gagging her and binding her hands together with gaffer tape.

It’s clear Harvey is intent on murder and as Leanne tries to make a run for it, he gives chase.

However, suddenly the ground opens up beneath them as damage from a sinkhole spreads.

If Leanne falls into the sinkhole she could find herself with no escape from the villainous Harvey.

Will the criminal succeed in killing her in a violent act of revenge?

Later on, Nick makes a shocking discovery at the flat. If he finds a clue about Harvey’s escape he will likely rush out to find Leanne.

But, will he get to her in time before Harvey strikes? If not, he could be the first to discover Leanne’s body.

Nick would be heartbroken if he lost Leanne, as the pair have had an on and off relationship over a number of years.

The pair first married as teens in the late 90s, before their relationship broke down, but they rekindled their romance later on in life.

If Leanne was killed by Harvey, Nick would be devastated and may want to move away as a result.

Staying in Coronation Street could be too painful for him, as there would be many memories of his time with Leanne there.

Could fans soon see business owner Nick leave the cobbles for good if Leanne is killed?

Leanne is not the only one at risk from Harvey’s escape as her sister Toyah Battersby (Georgia Taylor) is also in danger.

Harvey also vowed to get back at Toyah for her role in compromising his appeal.

Could she also be mixed up in Harvey’s plan for revenge? Will the Battersby sisters survive the night?

Viewers will have to tune in to find out their fate.