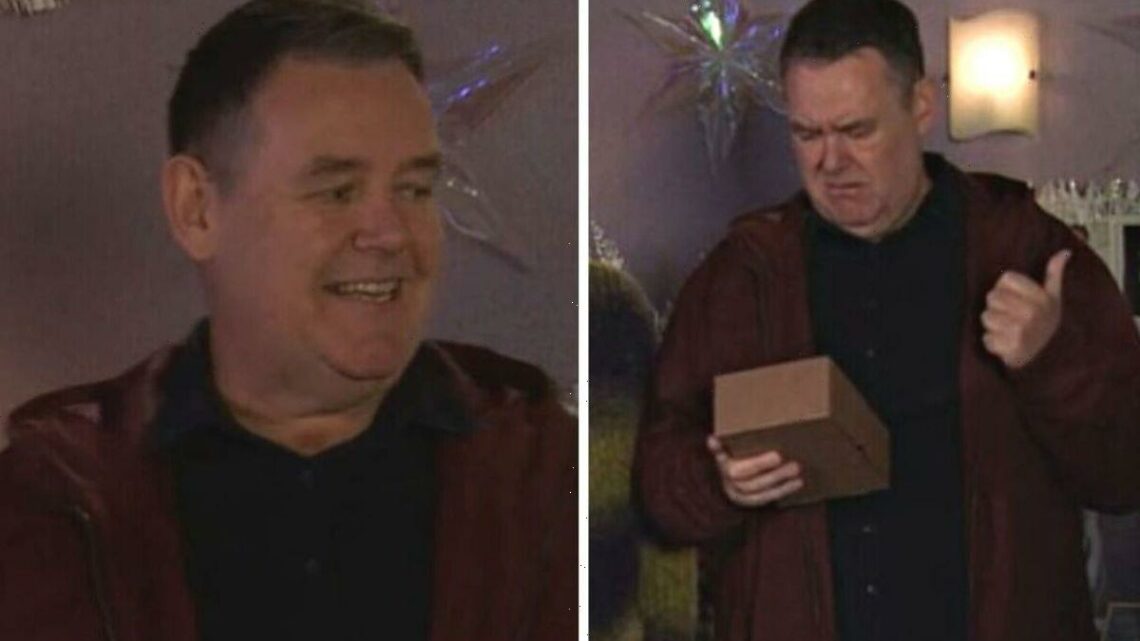 Coronation Street: Stephen lunges at Leo after being confronted

Undertaker George (played by Tony Maudsley) just wanted to surprise Eileen Grimshaw (Sue Cleaver) with a Christmas present he knew she’d like, so he arranged for her old sofa to be removed while he awaited the delivery of a new one. However, when the highly-anticipated sofa arrived it ended up being a tiny one built to go in a doll’s house. While some Coronation Street viewers found the plot hilarious, others questioned how George could have purchased the item and believed it to be a regular-sized settee. Some even claimed the idea was taken from an advert.

Eileen initially became suspicious that George was up to something when he tried to deter her from going home.

As they sat in the cafe, Geroge panicked when Eileen announced she’d be heading off.

“I haven’t even started prepping for Christmas dinner,” Eileen informed him as he tried to convince her to stay out a bit longer.

“Yeah, exactly, £20 they haven’t even peeled a sprout between them!” Eileen replied.

As she began to leave, George followed her and Eileen soon clocked he was up to something.

“I really think Todd might feel undermined, he doesn’t like to be micromanaged, does he?” George continued.

“Out with it,” Eileen demanded as she sussed George was hiding something.

Eventually, George admitted: “The truth is that your Christmas present’s arriving today, it’s quite a hard one to hide so I’ve got Sean and Todd and Dylan (Wilson, Liam McCheyne) trying to help me out.”

“Really?” Eileen smiled, to which George responded: “Cross my heart.”

She added: “When you say difficult to hide?” and George confirmed: “It’s pretty big!”

“Starting to look forward to Christmas now!” A delighted Eileen commented as she walked away from the house.

Later, George raced home to see if the sofa had arrived.

“Is it here yet?” He asked as he walked into the living room. Todd sarcastically answered: “Yes it’s here, it’s one of those invisible ones.”

“Yes alright, I’m just excited,” George remarked before adding: “So is Eileen… Actually, I think I might have got her expectations too high.”

George hurried to the door after there was a knock, but he returned with a small box.

“Are they bringing it in?” Sean asked, but George explained: “No, they’ve left.”

When Todd asked what he was holding, George replied: “I don’t know. It’s from the right place though – Gulliver’s Furniture.”

He opened the box to reveal a miniature sofa and stated: “I don’t understand.”

Grabbing a leaflet that was placed in the box, Sean read: “Thank you for shopping at Gulliver’s Furniture, furnishing doll’s houses since 1952…”

Responding to the scene, some viewers branded it “ridiculous”, while others noted it shared similarities with an advert.

Twitter user @I_am_KenBarlow pointed out: “#Corrie Did George not suspect something when Eileen’s settee cost about £7.99 instead of two grand?”

@158Deb fumed: “What a stupid storyline #corrie That sofa mustn’t have cost anywhere near. B***** ridiculous.”

@DanJBrownMUFC added: “I can’t believe George got that sofa I’m looking forward to the Christmas Day episode, especially Eileen’s reaction at the sofa and Fiz when she finds out what is really happening. #Corrie.”

@tmoraitauthor shared: “Didn’t George check the dimensions of that sofa before he bought it? #Corrie.”

Some fans found the classic moment hilarious though, with @babynewt_ writing: “I’M CREASING AT CORRIE AND THAT SOFA #Corrie.” (sic)

Coronation Street continues on Christmas Day at 7pm on ITV.