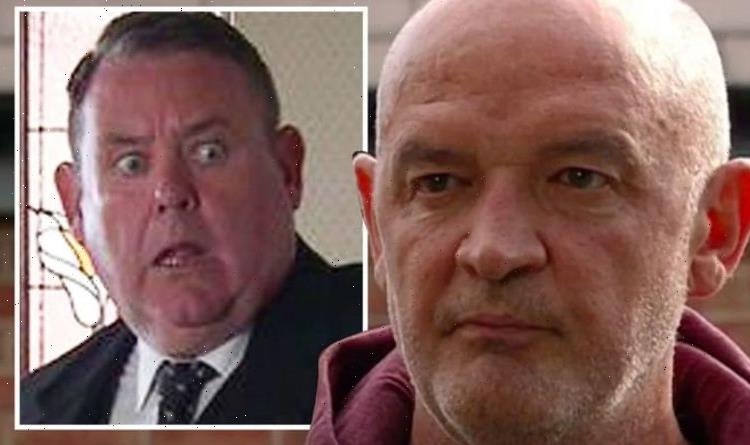 George (played by Tony Maudsley) has made an impression with the Coronation Street locals since he first turned up on the cobbles last year. One person he has found himself navigated towards is ITV soap favourite, Eileen Grimshaw (Sue Cleaver) and the pair have been enjoying a romance of sorts. However, recent scenes on the weeknight serial drama revealed he is harbouring the ashes of killer Phelan (Connor McIntyre) in the funeral parlour and it could be he has a rather familiar link to the villain.

As the mystery as to why George has them in his possession unravels, the funeral director assures his employee he will get rid of them.

He explains he will do it in a respectful manner as soon as he can, raising the question as to why the beloved character wants to give him a send-off after the way he terrorised the residents of Weatherfield.

When George’s back is turned, Todd tries to get his hands on the ashes but as he leaves the funeral parlour, he’s caught red-handed.

Worried about the ashes getting taken away from him, the funeral director chases after Eileen’s son but it’s not long before Phelan is flying all over the room.

With the last remains of Phelan spread all over the funeral parlour, George is not best pleased, again raising the question of why he cares so much.

Just as he and Todd are about to clean up the mess, Eileen walks in and wonders what on earth has happened.

Not wanting to upset his mother, Todd explains they are the ashes of elderly Patsy Freeman who had no living relatives.

Unaware they are the last remains of her killer ex-husband, the soap stalwart is saddened to hear of Patsy’s story.

Wanting to give the deceased a send-off, Eileen says she would like to help out and her son begins to feel immensely guilty.

George will be related to Pat

This could work in George’s favour, however, giving Phelan a send-off with Eileen there but under the guise of Patsy’s story.

The funeral parlour is well aware of his love interest’s connection to the killer and so might want to keep his link undercover.

With the guilt eating him up, the beloved character might not be able to bite his tongue any longer.

After spreading the ashes, George could explain they are the ashes of his cousin, Phelan, leaving his girlfriend rocked to the core.

Having found herself drawn to another member of the troubled clan, the stalwart could call time on her relationship.

Unfortunately, this could create a dilemma for Eileen as she knows George is nothing like his cousin, Phelan.

Not wanting her past to jeopardise her future, will she give the undertaker another chance despite his link to the villain?

Although he almost ruined her life, the serial killer could be the person who brings the love birds closer together.

Taking to Twitter following Friday’s episode of the weeknight serial drama, fans of the show theorised the undertaker could be related to the villain.

One viewer wrote on the social media platform: “#Corrie George will be related to Pat. Eileen’s new partner being related to her ex-partner!”

Another questioned: “#Corrie Why, or how, has George got hold of Pat Phelan’s ashes?” indicating once more the funeral director is somehow connected to the villain.

Whilst a third remarked: “I just love the fact that Pat #Phelan still casts a shadow, even years after his death!

“The character was so brilliantly played by dear @connor9mcintyre, and it’s testimony to him that #Corrie’s all-time greatest villain continues to be mentioned so often.”

A fourth remarked: “Please can Pat Phelan come back from the dead to liven up these awful storylines? #Corrie.”

Although he might not return from the grave, Phelan could continue to have a presence on the show because of George.

Speaking in an interview, the actor who plays George, Tony, 53, addressed working with the actress who plays Phelan’s ex-wife, Sue, 57.

The soap star said: “Well, I already knew Sue [Cleaver, who plays her], which was a real lifeline coming in to play Eileen’s love interest.

“We played husband and wife 20 years ago in a BBC cop show called City Central. I played twins, one of whom had a peanut allergy and was married to Sue’s character, while the other fancied her and was trying to kill his sibling!

“Anyway, myself and Sue kept in touch over the years, so when I was asked to come in to read with her for the part of George, it was as if we’d never been apart,” he continued.

But if George is related to the killer, could he share his murderous instincts, hence why he runs a funeral parlour?