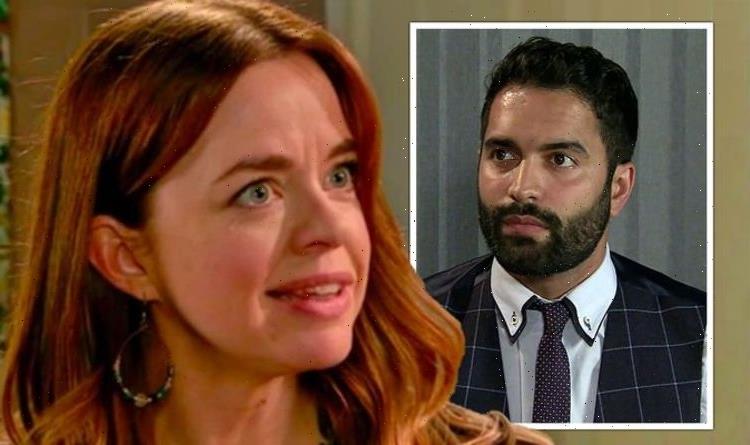 ITV soap fans have been keeping a close eye on Toyah Battersby (played by Georgia Taylor) and Imran Habeeb (Charlie De Melo) in recent weeks. The Coronation Street couple have had a lot on their plate as Imran prepares to represent their foster daughter Kelly Neelan (Millie Gibson) at her upcoming trial. On Wednesday night, viewers saw Toyah clash with Imran as he attempted to delay the trial. As tensions rise between the pair, could Toyah end up breaking things off?

Imran has been working hard in recent weeks to get everything in order for Kelly’s upcoming court appearance.

The teenager will soon be on trial after she and Corey Brent (Maximus Evans) were charged with murder following their involvement in Seb Franklin’s (Harry Visinoni) fatal attack earlier this year.

The youths are blaming each other for Seb’s death, giving conflicting stories of what happened on the night of the attack.

To make matters worse, Imran’s ex-wife Sabeen Habeeb (Zora Bishop) has been hired as one of the barristers on Corey’s large and expensive defence team.

Imran is desperate to make sure Kelly avoids a jail sentence, but could his determination end up putting a strain on his relationship with Toyah?

In Wednesday night’s episodes of Coronation Street, Corey’s name was leaked online and Abi Franklin (Sally Carman) was devastated when she realised this could jeopardise the trial.

Meanwhile, Imran met with Kelly and volunteered Toyah to sit in court with the teen as her guardian.

Later on, the police called to speak to Jack Webster (Kyran Bowes) about the posts he made about Corey online.

In the street, a distraught Abi accused Imran of using Jack’s mistake to delay the trial and Toyah was shocked to discover that was exactly what he was doing.

When Toyah confronted Imran, the lawyer vowed that, no matter how unpopular it makes him, he will stop at nothing to win.

Imran fumed: “Time is a luxury that I cannot afford to throw away. Now if I can just go over everything then…”

However, Toyah interrupted: “You have done a brilliant job and you will give Kelly the best defence possible.

“But, it’s time to lay the cards on the table. No amount of time or army of lawyers can alter the facts,” she insisted.

Imran hit back: “Don’t be so naive. Kelly’s life is on the line and it’s all on me. One wrong move, one slip up and that is it, her future is gone.”

Toyah replied: “Yes, I get it. I get it, I do. I even understand why you need me to be with her in court even though I’m going to hate every second of it.

“But, there’s a line Imran and you just crossed it,” she added.

“No, Toyah there are no lines! If I let up for one minute Sabeen will win this,” Imran raged.

“They really aren’t,” Toyah responded, shaking her head at her lawyer boyfriend.

Imran insisted that he wasn’t sorry for his actions and said: “I can win this, I can do it, and yes it is going to make me unpopular.

“Yes, it is going to alienate us from our neighbours but I don’t care. It’s like I’ve said from the beginning Toyah, I am all in on this no matter what it takes,” he concluded.

“Even if you lose me?” Toyah asked.

It seems as though Toyah has given Imran an ultimatum, making it clear his obsession with winning the case is pushing her away.

Toyah is wary of upsetting Abi further and wants the trial to be over and done with as soon as possible.

If Imran deliberately draws it out longer, could Toyah end up leaving him for good?

Will he prioritise his girlfriend or the court case? Viewers will have to tune in to find out the fate of Toyah and Imran.