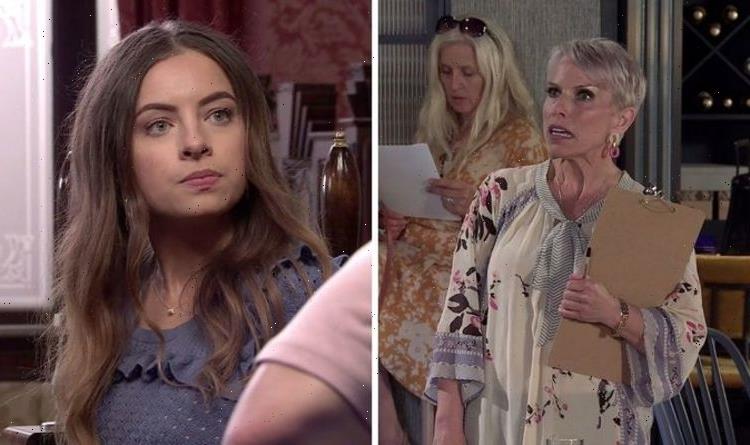 Daisy (played by Charlotte Jordan) tried for months to persuade Coronation Street barmaid Jenny to end things with her husband Johnny. When they eventually broke up, she didn’t hide her delight, and immediately tried to benefit from Jenny being the sole owner of The Rovers Return Inn. Lately, it has seemed like Jenny and Ronnie may end up as a couple – they did spend a night together before Jenny ended things with Johnny. Despite the fact they’ve been flirting back and forth, Jenny was heartbroken on Friday’s episode of the ITV soap when she finally plucked up the courage to tell Ronnie how she felt, only to see him on a date with Debbie (Sue Devaney). Daisy was already fuming for Jenny and later, a reunion between Jenny and Johnny was hinted at, leaving her more angered. Will she lash out at Debbie?

Jenny was telling Daisy off for interfering on Friday’s episode, when her stepdaughter replied: “I was only trying to help.”

“And I’m still married to Johnny,” Jenny remarked, just as Johnny walked in.

A flustered Jenny saw him and asked: “Hi love, how are you?”

“Intrigued,” he answered. Daisy quickly commented: “No, nothing to be intrigued about.”

“We were just having a natter,” Jenny attempted, as her husband said: “A natter that sounds like it might involve me.”

Later, Jenny admitted to Daisy that her marriage was in fact over after she’d had a chat with Johnny.

Daisy still seemed concerned at the thought of her stepmum getting back together with Johnny, as she remarked: “You’re not getting back with him are you?

When Jenny confessed she was ready to move on, Daisy convinced her to go and talk to Ronnie, who was having a drink in the bar.

But just as she stepped into the bar, she saw Debbie joining Ronnie on a date.

Fuming, Daisy asked: “Do you want me to spill something on her?”

Jenny told her not to, but with her and Johnny now more likely to get back together, will Daisy take action to keep Debbie and Ronnie apart?

It wouldn’t be unlike Daisy to meddle into other people’s relationships, and she has always been intent on keeping her stepmother and Johnny separated.

It’s possible she might attack Debbie as a means of scaring her off Ronnie.

Ronnie later joined Jenny for a chat, and he shared his thoughts that she and Johnny should get back together.

“It was you I wanted to be seeing,” he admitted.

He told Jenny that Johnny was unhappy with them being together, even though he had officially given Ronnie the green light.

“I think he’s still in love with you, though,” Ronnie shared.

“Our marriage is over,” Kenny protested, but Ronnie said he believes Johnny secretly wants her back.

The two agreed they were just friends, but it was clear they still shared a spark.

But while Ronnie dates Debbie, Daisy won’t sit back and watch it happen if it means Johnny could come back on the scene.

She has upset many Weatherfield residents since she arrived on the cobbles, and it seems she isn’t over her conniving ways.

If she does manage to threaten Debbie, it’s possible the restaurant owner might back off from Ronnie, but won’t tell him why.

If Ronnie is left confused by her mixed signals, he might just rush back to Jenny, whom he clearly still fancies.

But will Daisy’s behaviour be exposed?

With Todd Grimshaw’s (Gareth Pierce) behaviour recently exposed to the street, he has become an outcast in Weatherfield.

Could Daisy be the next resident to be ousted by the tight-knit community?

Coronation Street continues on Monday at 7.30pm on ITV.