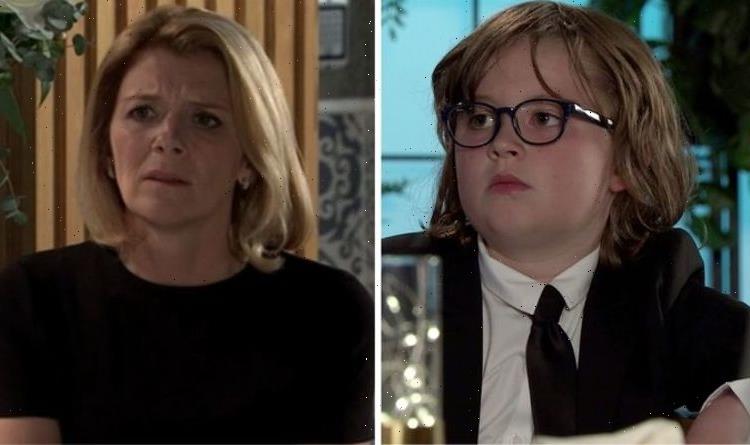 In recent weeks, Coronation Street viewers have watched poor Sam Blakeman (played by Jude Riordan) lose his mum Natasha (Rachel Leskovac) after she was killed off. Natasha’s death meant Leanne Battersby (Jane Danson) and Nick Tilsley (Ben Price) have been left to raise Sam, although, things haven’t been easy for the couple.

In scenes that aired on Tuesday night, Leanne and Nick became worried about Sam after he refused to talk to them at all.

They decided it may be best for the youngster to seek professional help as he is struggling to come to terms with his mum’s death.

After speaking to a doctor via video link, the GP explained she was going to refer Sam to mental health services.

“They offer something called talking therapy,” the GP told them.

“Sam will be assessed and if he meets the criteria then he should be allocated a therapist.”

Later on in the episode, Leanne broke down in tears in the cafe when speaking to Steve McDonald (Simon Gregson) about being a mum to Sam.

She went on to admit to Steve: “I can’t be Sam’s mum. I can’t replace Natasha.

“I’ve just not got it in me, not after Oliver and now Nick is falling to pieces and I feel like I am letting everybody down.”

“You’re not going to be letting anybody down,” Steve reassured.

“But, you can help each other out,” he added. “We have all got room for some more love in our life.”

After reflecting on what Steve had said, Leanne and Nick chatted about Sam.

“I just want him to be happy that’s all.”

“That’s all I can ask for,” Nick replied as Leanne added: “He’s part of our family, isn’t he?”

As Leanne looked towards Sam, who was sitting across from her, she said: “I am going to look after him.”

“You’re amazing,” Nick praised as Leanne hit back: “I know!”

Sam is still not talking to anyone following the death of his mum and it is clear to see he struggling to grieve.

Leanne has also had a tough time following the loss of her son, Oliver.

However, after her chat with Steve, she seems to be feeling more optimistic about being a parent to Sam.

Could Leanne decide to legally adopt Sam in the hopes it will make him feel more included in the family?

However, with Sam already in a bad place, could the surprise news tip him over the edge leading him to run away?

Since the death of Natasha, viewers have praised Leanne and Nick for how they have looked after Sam.

Taking to social media, Nancy penned: “Absolutely outstanding scenes with @JudeRiordan and Ben Price. Leanne is a strong woman and you are an outstanding actress.” (sic)

Corey said: “I love the dynamic between Leanne, Nick and Sam. And Simon, of course. Hope they move into a house on the street soon. They’re great together.”

While Barz tweeted: “Great scenes with Leanne and Nick talking about Sam in the room, please never split them up again! Such a great couple.”

Coronation Street airs on Wednesday at 7.30pm on ITV.

Where was Ted Cruz born?