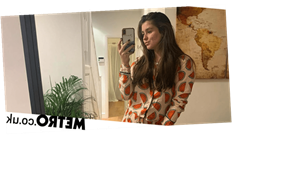 Coronation Street has played down rumours that Brooke Vincent will be leaving the soap as Sophie Webster following the birth of her baby son with partner Kean Bryan.

She announced the news on Instagram, with a post reading: ‘On Wednesday 23rd October at 8.14am Our Baby Boy Arrived. Mexx S J Bryan, you complete us.’

While she has been off, it has been reported that her contract will expire in May and she is yet to sign a new deal to come back to the cobbles as the much loved character.

This has led to tabloid speculation that the actress has no plans to return to the show at this point but the soap has clarified that the door is very much open for Brooke to reprise the role as soon as she is ready.

A spokesperson stated: ‘There was never a fixed return date for Brooke, and there is no pressure for her to return within any particular time frame.

‘The door has been left open for her at any point in the future, whenever that might be.’

Sophie was last seen heading off travelling, putting her relationship with Paula Martin (Stirling Gallacher) on hold. Paula has since had a one night stand with Tracy Barlow (Kate Ford), leading fans to the conclusion that the couple were either split or on a hiatus.

But recently, Paula has been much too busy with legal issues to engage in any further shenanigans.

Announcing her pregnancy at the time, Brooke told OK!: ‘We’re both each other’s biggest fans and having a baby together will add an extra bond. ‘Kean brings out the best in me and it makes me so excited that we’re on this journey together.

‘I like to think I’m the boss of our relationship but Kean has a really wise head on his shoulders, so I know he’ll be a brilliant dad.’

She’s Back! Meghan Markle Returns to the U.K. After Royal Exit