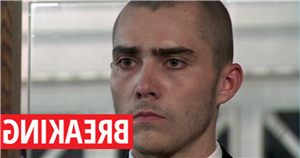 The young teen has been on trial for his role in the tragic death of Seb for the past week.

Members of jury came to their decision during the latest episode of the ITV soap and Corey was found not guilty.

In a devastating turn of events, innocent Kelly Neelan (Millie Gibson) was sentenced to time in prison for the crime.

Meanwhile, Corey left the courtroom smirking, as Abi arrived too late to hear his not guilty verdict read out.

Angry viewers rushed to social media to share their frustration following the verdict from the Weatherfield court.

One fumed: "Why do soaps always do that!"

Another said: "Are you for real? He actually got away with it? No way, that's so unfair and not right."

Someone else warned: "That wink, you'll get what's coming Corey!"

Another angry viewer said: "Cannot believe it I'm going to take that wink and snap his neck with it."

And another added: "Are you actually joking me how the f*** is that right? Corrie really have messed up with this one not happy one bit."

Corey violently killed Seb back in May, when he and mates Eli and Jay set upon Seb and his girlfriend Nina Lucas (Mollie Gallagher) in a brutal hate crime attack.

Seb was knocked to the floor as was Nina.

However, Nina made a run for it, and found herself on the receiving end of an brutal assault from Jay and Eli.

Corey stayed behind and repeatedly kicked a defenceless Seb.

Kelly was also present on the night of the assault, pleading with Corey to stop, and even attempted to pull him away from Seb, but Corey was hellbent on violence.

Nina was initially unable to remember what transpired on that horrific evening, but last week saw her memories restored ahead of the trial, allowing her enough time to make a new statement.

Corey was recently cross-examined by Imran Habeeb (Charlie De Melo) in dramatic scenes professing his innocence, all the while pointing the finger at Kelly.

The verdicts come after Nina actress Mollie Gallagher won at Thursday's National Television Awards for her portrayal of the grieving girl.

Coronation Street continues Monday on ITV at 7.30pm and 8.30pm