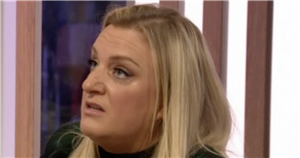 The One Show turned into roars of laughter as Daisy May Cooper appeared on the programme to speak about her new book Don't Laugh It'll Only Encourage Her but dropped in a tribute to her on-screen crush.

Hosts Harry Judd, 35, and Angellica Bell, 45, could barely contain their giggles as Daisy explained she'd devoted her own publication to Good Morning Britain star Ben Shephard "because he is fit".

A picture of the Tipping Point presenter flashed up on the screen which saw the This Country star beam: "He's a bit of me. Look at him there."

She gushed: "Look at that face, those kind eyes."

New dad Harry asked: "You got a message from him yesterday right?" "Yeah, he said 'Do you want to go out for drinks and I thought 'yeah absolutely,'" chirped Daisy before asking: "Does he have a wife?

Both Harry and Angellica responded in sync: "Afraid to say he does. Wife and kids."

Angellica joked: "Are you going to be a mess when you meet him?"

The mum-of-two replied: "Yeah," before bursting into fits of laughter.

Daisy is believed to be single after she separated from husband Will Weston in 2021 after two years of marriage.

In 2018, the mum-of-two took home a BAFTA TV Award for Best Female Comedy Performance for playing Kerry Mucklowe in the BBC three series This Country.

The actress not only starred in the hilarious TV programme but co-wrote it with her brother Charlie Cooper.

She has appeared on Celebrity Gogglebox with her father Paul, space comedy Avenue 5 and Taskmaster.

Earlier this week, The One Show suffered a major shake-up when host Jermaine Jenas was left to hold the fort on his own after his co-star couldn't make it to work.

On Monday, Jermaine was forced to host alone as he said Alex had come down with the "superbug".

Appearing on screens alone, he said: "Alex Scott should be with me but unfortunately, she's been hit, like so many, with that dreaded super cold so get well soon, Scotty.

He added: "Can't wait to have you back!"

The presenter failed to appear on the BBC programme for the entire week.

Leaving Gethin Jones to explained on Thursday's programme that Alex would be back on-screens next week.

Gethin said: "Now next week I'll be up in Glasgow with Alex Scott, presenting The One Show live from COP26 and doing a bit of reporting into Morning Live."

The One Show airs weekdays on BBC One at 7:30pm.

Colorectal cancer: The sensation immediately after having a poo that can be a sign