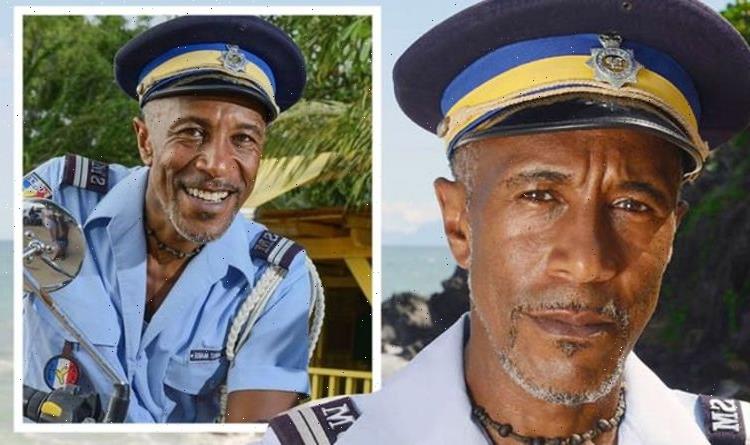 Danny, 60, bid farewell to Death in Paradise in 2018 after appearing in the BBC drama since it first started airing in 2011. Unlike some of his co-stars’ alter-egos, the character of Dwayne was not killed off, leaving the door open for his eventual return. After almost four years of wondering if the former officer would ever make a comeback, it was been announced he will be taking a trip to Saint Marie for the show’s first-ever Christmas special.

According to reports from The Mirror, the historic move by the programme’s bosses is to continue the celebrations of its 10th anniversary, which has already been marked with the return of some familiar faces.

To round off the landmark year, the beloved character is being drafted in for the 90-minute special episode as Detective Sergeant Florence Cassell (played by Josephine Jobert) takes a break to spend the holidays with her family.

Dwayne arrives to help Detective Inspector Neville Parker (Ralf Little) with a murder mystery but there will be a number of altercations along the way.

This will include the former character bumping into Officer Marlon Pryce (Tahj Miles), who he arrested when he was a member of the team years before.

Making his grand return, actor Danny has spoken out on reprising his role and what could be in store for the fan favourite.

The former Red Dwarf star said: “It’s always a pleasure going back to the ­Caribbean. After four years away, fitting back into the fold should be seamless as I know the new lead cast members.

“I look forward to bringing Dwayne and this 10th ­anniversary special script to life,” Danny explained and executive prodder Tim Key also teased some details of the historic episode.

“We’ve been talking about a Christmas episode for years so we’re beyond excited to be finally making one and to be working with Danny again.

“We can’t think of a better place to spend Christmas than in Saint Marie,” the show boss explained to The Mirror.

It’s always a pleasure going back

Commissioning editor for BBC Drama, Tommy Bulfin, also added: “We are delighted Death in Paradise will be bringing the sunshine to the festive schedule.”

This historic episode will be an extension of the 10th season, with the 11th airing from early next year.

As was done with the most recent season, all filming will have been completed under strict health and safety rules with regard to the pandemic.

Prior to the announcement of Danny’s return on Tuesday evening, fans had already been flocking to Twitter, urging the actor to make a comeback.

One avid fan wrote on the social media platform: “I hope they bring Dwayne back next season #DeathInParadise.”

Another posted: “I love Death In Paradise. It’s a great series. What would make it greater, now JP [Hooper] has left, would be to bring back Dwayne! I really miss him #DeathInParadise.”

Whilst a third remarked: “If JP is leaving can we have Dwayne back please? #DeathInParadise,” a fourth shared: “@DannyJohnJules you got plans to return to #DeathInParadise? I miss Dwayne.”

The actor who plays Neville, Ralf, 41, has previously spoken out about a return for Danny, prior to the announcement he would be a part of the Christmas special.

Ralf explained of his co-star’s possible return: “I know Danny, I’ve known him for years because it’s a small industry.

“I think he’s absolutely fantastic, an absolute legend. He’s a legend of my childhood. Who knows? I’m gonna use the usual phrase and just say look, never say never,” he told HELLO! Magazine.

An impressive eight million viewers tune in to watch the regular episodes so could this be a record-breaker for the show?

Death in Paradise season 1-10 are available to stream on BBC iPlayer.